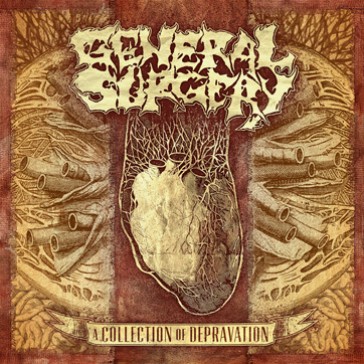 For those who don’t yet know, General Surgery is a Swedish band that traffics in the gore grind metal pioneered about twenty years ago by the UK band Carcass. “A Collection of Depravation” (sic) gathers up various split recordings, B-sides, demos and unreleased session jams that General Surgery has made since 2003 when the band reformed after a decade-long hiatus. The sicko Swedes even include a homage / rip-off cover of a Carcass song. Looking at the CD booklet is an experience in itself – 30 songs on the one disc, you gasp?! – fear not , most songs are short and sweet (erm …) and the whole shebang is over in about 66 minutes. Novice GS listeners should listen to the whole album in one go, as though the disk were just a one-tracker: the songs speed by quickly and if you sneeze, you’ll miss one whole track.

The first eight tracks are from a 2003 split recording with The County Medical Examiners, a similar Carcass wannabe band: the songs are short and GS rips through them at blistering speed. The execution is very exact, resulting in a hugely dense and dirty sound that careens all over the place with spurts of melody and spasms of pounding drums. The production is murky so the whole recording has a layer of filth. Usually there are two sets of slobbery vocals with a deep guttural set dominating a slightly higher but equally glucky voice.

Next are four tracks from the 2004 split recording with Australian death metal band Filth: the delivery is sharper and the sound is cleaner if thinner but at least the very brief lead guitar solos gush out in excess microbacteriologically pullulating frenzy. The drums don’t thump so hard but the thin production may be to blame; even the vocals are less dense and menacing than on the previous split. A couple of tracks are literally blink-and-you’ll-miss-’em, lasting only a few minutes each before they’re consigned to the hospital incinerator. Step up the split recording with Spanish band Machetazo, recorded the same year as the Filth split. The songs are even faster and shorter than on the split with Filth. One track delights in the glorious title “Viva! Blunt Force Trauma” which would be a great band name if it hasn’t been taken already. Pity the sound quality means the actual song itself doesn’t quite live up to what it promises though the band tries its hardest and punkiest.

Lone track “Fulguration” demonstrates that the good doctors know a rock’n’roll groove when they meet one and include it among their scalpels and lancets. A couple of tracks from the “Left Hand Pathology” sessions show the GS guys in casualty-ward mode: raw and grindingly rough around the edges. Skip a couple of years and we come to another split, this time with Butcher ABC: the boys display a sense of macabre theatre in delivery and melody with sinister death metal riffing. The songs are as fast as ever though and retain a punky spirit. Vocals differ from what they have been on previous recordings: a bit clearer, more upfront in the mix and more confident to the extent that the vocal lines depart quite a bit from the music and stand out.

We arrive at the songs recorded during the “Corpus in Extremis: Analysing Necrocriticism” sessions but not included on the actual album. The band’s style is a little slower and more structured with more melody; you could definitely say these guys have become a death metal band. “Nephroblastoma” again shows GS is capable of getting into a real rocking rhythm groove before the guys fly off on blastbeat attacks. You sometimes wish these fellas could include a bit more catchy rhythm and the occasional lead guitar solo in their music as they do on this track. GS finish up with a Carcass cover “Empathological Necroticism” which is not greatly different from the Carcass original in execution.

The GS guys are good musicians who work as a tight unit very well and they display flashes of rock’n’roll inspiration and originality. Occasionally I think it’d be nice if GS did something really out of the ordinary that even Carcass couldn’t have done, something like actually simulate somebody screaming when his anaesthesia wears off during the illegal kidney removal or pretend they’ve run out of equipment and all they’ve got is the good old Black and Decker drill for that necessary lobotomy but if the musicians elect to be Carcass clones (circa the “Reek of Putrefaction” debut album back in 1989) and are content with that, then I’m happy for them.

There was a reason that Carcass gave up churning out gore grind metal and became a straightforward melodic death metal band in the first place: writing and performing this kind of music forever is a bit childish and silly and I’m sure it was intended as a satirical comment  on Western consumerism and society. Perhaps this is what separates Carcass and their emulators like GS.