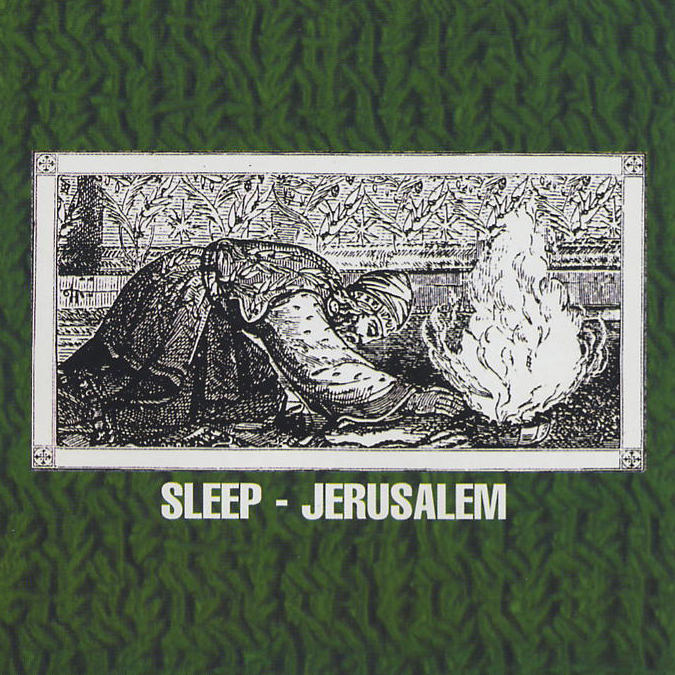 It’s taken me a lo-o-ong time to listen to any of Sleep’s old recordings. I’m glad I started with “Jerusalem” as this is a good long track combining slacker doom metal with an odd religious vibe courtesy of the strange, doped-out lyrics that mix biblical and marijuana-inspired ecstasy in equal measures. The sound is deep, strong and steely and the drumming is steady, straightforward and sure in direction. At the seventh minute the track becomes tougher, verging on aggression almost, and a chant of a lone prophet figure starts up. The riffing is so strong it could pound wallpaper off walls and the bass melody just about takes over the lead guitar role in its distinctive detuning.

About the 13th minute, after a brief outburst of lead guitar soloing, the music resumes its surge with a stronger, rough-edged vocal. At this point I expect an organ to join but the musicians bravely soldier on with the standard guitar-bass-drums template. They don’t disappoint: by repetition, they push farther in their loose way. Around the 20th minute, the music abruptly changes to a darker, more dangerous direction and the singing acquires an edge of derangement. This passage varies little until the 30th minute when the lead guitar breaks away and follows its own path but the overall music’s power is all-encompassing and hypnotic and I hardly notice the monotony, if any.

From then on until the abrupt end, the music is more or less repetitive, looping with near-robotic chanting vocals save for the occasional lead guitar break-out. Although listeners may find this part of the track monotonous, they should consider the intent behind the repetition: the track simulates a religious ritual with transcendence as its aim and that’s why it cuts out the way it does – the musicians have been “raptured” into another higher, richer plane of existence – and the rest of us can only watch on and envy them. The monotony serves to absorb listeners’ attention so through total immersion we too join Sleep on their journey mentally if not physically and experience transcendence in our heads.

The thing about “Jerusalem” that impresses me most is the music’s deep rhythmic power.  It has to be felt to be believed. The power travels to all parts and extremities of your body even if you’re not wearing headphones. Forget about melody and variety, just go for the music’s primal pulsing being. You will be transported to another realm!

As many TSP readers already know, two members of Sleep, Al Cisneros and Chris Hakius, later formed Om which is still active but without Hakius. Sleep have also reformed and Cisneros also continues performing with that band in parallel with Om.