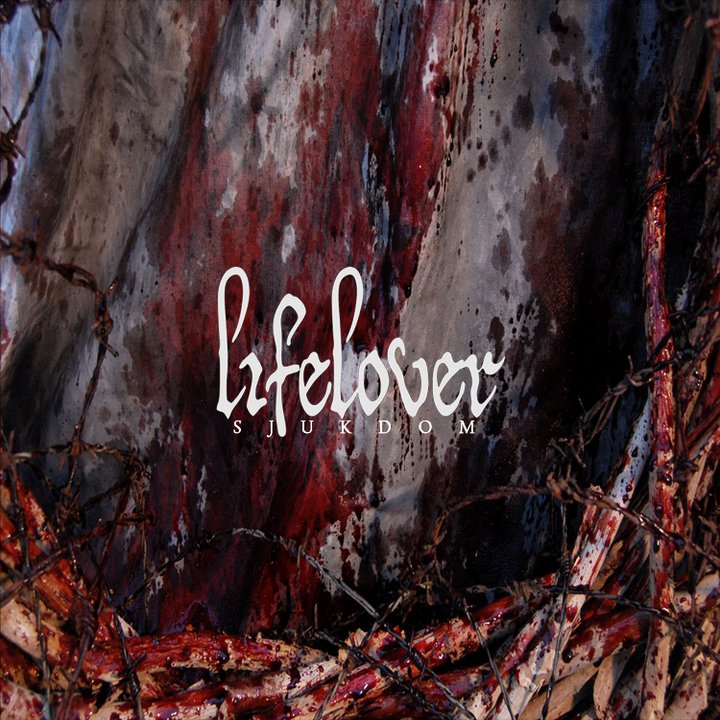 “Sjukdom” sees Lifelover maintaining its consistency as suppliers of depressive metal with a melodic pop bent. The metal part tends more towards thrash and death metal lite on tracks like “Svart Galla”, “Led by Misfortune”, “Totus Anctus” and “Karma” among others but apart from this and some ambient interludes that drop into a lot of songs unexpectedly, “Sjukdom” isn’t a major musical advance for Lifelover. There’s plenty of black metal roar in the buzzing guitars and the solo piano tickling is still doleful. Though the music is hard-edged enough from the melodic thrash that occasionally pushes Lifelover close to Metallica territory, the band’s sound is very clean and clear.

Perhaps the best thing about “Sjukdom” is the vocals which are wild, hoarse and gabbling, as though the singer – there may be more than one singer at work here – is becoming mentally unhinged and disordered. On “Totus Anctus” and “Becksvart Frustration”, the singing is close to death metal gruff in line with the songs’ angry riffing. On other tracks the voices are ragged and desperate as if the vocalist fears falling permanently into madness.

Most songs are short and never really develop much. Definite moods and atmospheres that might be associated with particular tracks and make them stand out are not realised as a result. The music gallops along at more or less the same pace when some songs should be slow to allow the despair and blackness to be savoured. Found sounds and spoken voice recordings appear on tracks throughout the album but I get the impression that the “experimental” non-music elements are included just to spice up the music and compensate for the lack of very distinctive riffs and melodies. Songs carry on then stop suddenly for a radio recording or an ambient interlude to drop in which is why I get this niggling feeling. There’s a coolness, a kind of distance in the music, that stops Lifelover from being really involved in the subject matter of their songs; sure, there’s plenty of moaning, howling and screaming in several tracks and the music can get very angry but the emotion doesn’t come over as really heartfelt or wrenching. There’s plenty of grit but there’s also a sterility in the recording.

Not many songs stand out but I note “Homicidal Tendencies” for its heavy thrash quality and the wild singing, “Utdrag” for being the only track with a loner urban-blues desolation mood and “Bitterljuv Kakofoni” which is a quietly guarded and suspenseful piece with guitars way down in the mix and a drumbeat rhythm that perhaps should be a bit quieter and more muffled.

After hearing four Lifelover albums, I see my wish that Lifelover might throw away their attachment to pop songs and just let rip with flowing black metal / post-rock / bluesy urban music with long howling voices, everything improvised with no straining for catchy hooks but just pure raw playing, remains unfulfilled.