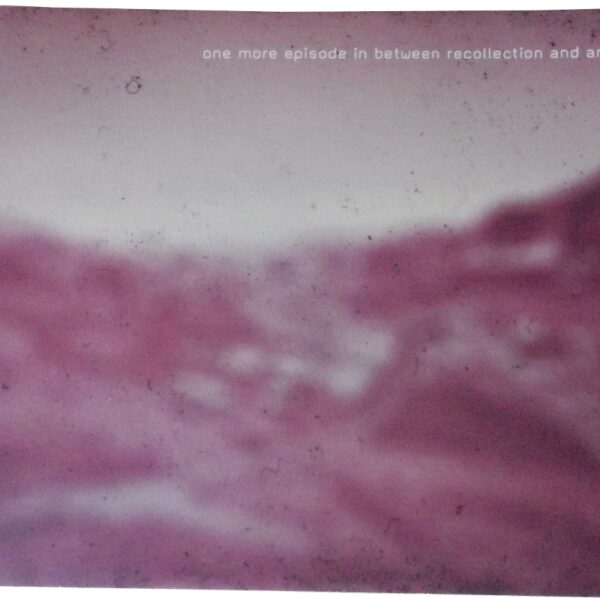 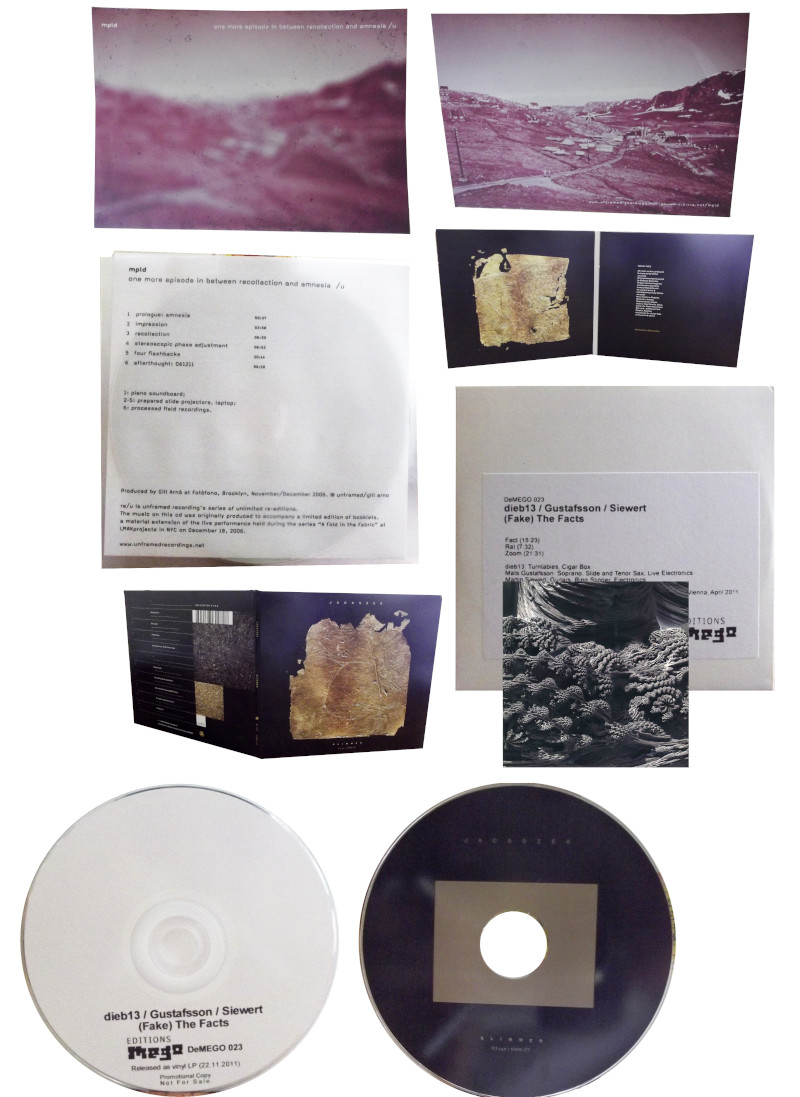 A Fold in the Fabric

Gill Arno has rescued a document of a performance piece from 2006, where he perfomed under his mpld name which is used for his amplied slide projection work. At that time it existed as a cassette edition of 10 copies, and now here is One More Episode In Between Recollection And Amnesia (UNFRAMED RECORDINGS U003) repressed as a CDR. When originally performed at a sound-art venue in New York’s Chelsea district, the piece was meant to accompany a series of art booklets, and the core performances are studio-based compositions where Gill is manipulating the sound of slide projectors. The tiny sound events which interest Gill include the whirring of the projector fan, the feedback that resulted from him clipping a small microphone to the device, or just the general “clunky dynamics” that came out of the performance. But what we hear on the CDR is even more rarefied, as the composer reworks the material, seeks to isolate sounds, and produce as much abstraction as possible. Tracks two through four are impressive enough achievements in this area, the piece ‘Stereoscopic Phase Adjustment’ in particular giving us a close-up aural picture of a fan which is about as powerful as a helicopter blade. A midget helicopter perhaps, one being flown by plasticine airmen wearing cellophane jump-suits. ‘Four flashbacks’ however comes in at twenty minutes, and is practically delirious in the way it piles up the treated and abstracted sound-events into a thick soup of electro-acoustic fog. Given the suggestion of “flashback” one is tempted to read this long piece as a sort of twisted memory or flu-ridden impression of the preceding pieces. At all events it’s a sufficiently wonderful set of aerated drones, lite-industrial grindage, and a concentrated effort to produce strangely compelling music out of non-musical sources. The release is topped and tailed with non-projector pieces, starting with 30 seconds of ‘Amnesia’ – a short metallic scrape episode which could almost pass for a prepared piano – and ending with ‘Afterthought: 061211’ which is exclusively made up of field recordings. Lastly we have the enigmatic cover image, which plays with layers of dust-coating on a slide and different focal views of the same image. This excellent quiet & minimal concept-work is another item from the bundle which Gill sent to us in December 2011.

Glimmer in the Zimmer

Jacaszek‘s Glimmer (GHOSTLY INTERNATIONAL GI-147) is slowly growing on me, and the surface effects that are most pleasing include his heavy use of distortion and simple repeated loops of musical notes. The source music which he works with was played using real instruments by three guest musicians, using harpsichord, bass clarinet, acoustic guitars and metallophon, recordings of which are collaged together with electronic music by the Polish musician Michal Jacaszek. He’s attempting to create a potent bittersweet taste in the listener’s mind, as melody and abstraction writhe back and forth over an uncertain ground, all of this struggle taking place behind what he aptly describes as “a curtain of dirt and fuzzes”. My initial impression was to mistake this CD for another slice of ordinary ambient laptop-drivel, but on the contrary this is a well-crafted piece of art, a fine collision of organic musicianship with thoughtful tape editing and studio skill. In places, it’s even quite affecting and moving. Was released early December 2011.

Prove it, just the facts

On (Fake) The Facts (EDITIONS MEGO DEMEGO 023), we also hear a collision between musical instruments and electronics, but this one takes place in an improvised real-time live arena. The players are dieb13, Mats Gustafsson, and Martin Siewert, and they did it in two locations (one live, one studio) in Vienna in Spring 2011. Swedish Saxman Gustafsson (who uses soprano and tenor saxes here) has been known to rasp out many crazy free-blowing sounds in his time, but on the 15-minute opener ‘Fact’ he resembles a trapped beast howling in melancholic pain through a blocked snout. Alongside him there is a lurching rhythm of fizzing manic energy which may originate either from dieb13’s jet-propelled turntables or Siewert’s unhinged guitar, but with all the free-flying electronic mayhem let loose in those four chocolate-lined walls on those fateful days, who can say for sure. Not since Evan Parker collaborated with noisester John Wiese have we heard such a potent blend of brass-lined puffing with inchoate crackling bursts.

The next cut ‘Rat’ is equally claustrophobic, and as the the three madmen tell the tale of this rat, they seem intent on clogging up the air with theremin-like squeals in order to emulate the voice of that rat. Said rat is poised in a perilous position, hemmed in on all sides by menacing saxophone moan-drones and ominous guitar rumblings of a dangerous variety. The atmosphere is as charged as a laboratory where cruel scientists perform needless experiments on rats. The difference is that now we are that rat, and death by dissection or electrocution is only a heartbeat away.

The flipside of this remarkably intense LP is the side-long ‘Zoom’, one-and-twenty minutes of steadily increasing doom noise where the three unhinged players do not relax the steam-pressure for the first half, blasting out with solid and heavy thunderbolts as they may. Such is the general blend of tones in this brick-like melange that it’s virtually impossible to discern one instrument from another, and the three European minotaurs merge into a single two-horned beast. For the latter half, they open the steam vents and finally give a man enough space to breath, and the remainder of the performance resembles a trip to Company Week in 1988 seen through the distorting lens of a dozen filter-pedals, before descending into a strange alien place where alien electronic chatter is accompanied by mellow jazz guitar strums and distant orchestral sweeps from a stuck record on a turntable. All rulebooks thrown into the shredder, this is one of those rare collaborative efforts where the fur really flew and everything caught fire, and it’s likely to produce similar sensations in your own personal wardrobe. Released as a vinyl LP in November 2011.