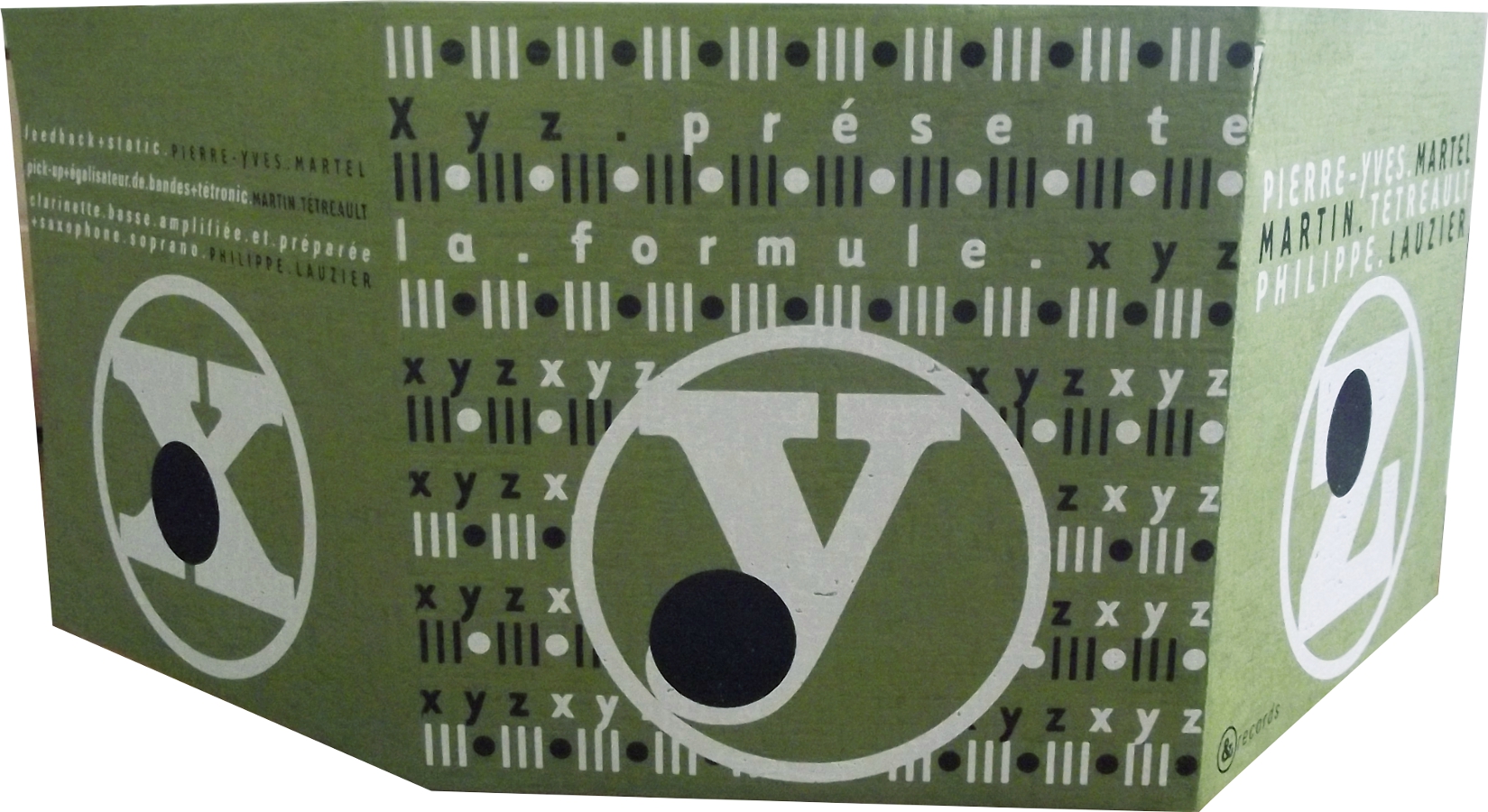 We received a bundle of five items from the & Records label of Montreal which arrived here 20 January 2012. They all come in foldout silkscreen covers designed by Fabrizio Gilardino. Here are two of them. On Pink Saliva (&11), the trio of Pink Saliva perform 12 instrumentals live in the studio using a combination of trumpet, percussion, a bass guitar and a laptop, plus microphones for occasional wailing feedback effects and a lap-steel guitar. I was encouraged by the presence of Alexandre St-Onge on this one, as he made an intriguing “sleepytime” documentary record in 1999 called Une Mâchoire Et Deux Trous while wearing his “sound artist” beret. I enjoyed that one, but this record I find less compelling. The performances are mostly a vehicle for Ellwood Epps to play rather pointless raspberry-blowing effects through his trumpet, while the other two musicians provide listless backdrops of chuntery noise. I would welcome a bit more excitement or danger in the playing, but it feels very predictable – in spite of the obvious commitment to free-form playing. Things feel random, but not much fun; there is something self-important and solemn about the overall tone of these fellows which I mistrust.

The record La Formule XYZ (&14) fares much better with me, with its stern no-nonsense discipline that at times feels as strong as iron. It was made by the trio XYZ, comprising Martin Tétreault, Pierre-Yves Martel and Philippe Lauzier, all Montreal players to a man. I see they played before in 2008 on a CD called Disparation De L’Usine Éphémere, using not-dissimilar instrumentation but joined by the acoustic guitarist Kim Myhr. What we got here is the winning mixture of Lauzier’s woodwinds (bass clarinet and soprano sax) with live electronics – be it the feedback-static hum of Martel or the more complex set-up of Tétreault, which involves magnetic pickups, a mixing unit of some sort, and something called the Tétronic which is probably a device of his own making. Unlike the above record which hops about as though all the players have pants full of fleas, this disk just sits there and groans out monotonous and unnatural tones like a bad-tempered old turtle who missed his evening meal. No concessions made by the three brooding magicians here to variations in tempo, register, or pitch, and XYZ soon succeeds in wearing down your resistance. Even the very track titles refuse to acknowledge the listener’s humanity, alienating us with their alphabet soup of letters which resemble algebraic formulae. If these balmy summer days lead you to a hankering for some intensive Nakamura-styled feedback laser surgery but you’d also like to back it up a notch in the direction of Anthony Braxton or Jean-Luc Guionnet, then this is your next purchase. Succumb freely to these splendid close-knit wafers of electro-acoustic intensity, that’s my advice.

Another generous label is Unfathomless of Brussels, who sent us a bundle of five CDs in January 2012. To expose to the world more artistic field recordings – “phonographies”, as they would have it – is the plan of this imprint, and among their keywords are intangibles such as ‘spirit’, ‘memories’, ‘aura’, ‘resonances’, and ‘interaction’. All the work they release must attach itself to specific locations in the world, and Lignes D’Erre & Randons (U08) does not stray from that edict. In this collaborative work between James McDougall and Hiroki Sasajima, the named sites are the Akigawa Valley and some limestone caves in Otake from the Japanese contingent, while Mr McDougall elects to capture sound events from the D’Aguilar mountain range which is somewhere to the north-west of Brisbane. The Australian half of the act provides grid references for this locale, in the tradition of Chris Watson. There’s a confusing sleeve note on the back cover which is almost intelligible, and suggests that the pair never left home or met up but created the music by “an exchange of recordings”, perhaps doing the mutual reprocessing thing which has been popular for some time now. I have no idea what they mean by the “sensitive issue of not occupying the same token sites”, but it’s clear from the sounds they make that their boundless sensitivity (to the needs of the planet, to the ecology, to human rights) is not in any doubt. As to the record, it’s not a bad example of this genre, but neither does it represent a huge advance in the area with its endlessly grey, rumbling tones. Indeed it’s puzzling how they manage to make the wild terrains in question appear so featureless and boring.

Further abundance from the Attenuation Circuit label in Augsburg, whose bundle of four items reached us on 16 January 2012. I pulled out the Raumpunkte (ACC 1002) CDR in its long DVD case to be greeted by a beautiful set of droning musical utterances, half music and half process. The duo of Gerhard Zander and Gerald Fiebig did this at an art centre in Augsburg, intent mostly on exploring the acoustics of this enormous space – it was a converted factory, and hopefully yielded up the sort of echoey resonances which cause paroxysms of delight for all followers of Alvin Lucier. While the improvised music that emerges is rich and full, it seems our two German friends were playing their instruments (guitars, kalimba, samplers, and something called a Buddha Machine) as quietly as they possibly could, letting the natural echo of the room do all the work in terms of providing volume and massive scale. Loops, drones, and gentle pluckings characterise the musical portions of the show, but the conceptual intention is to plot the space of the room using the Buddha Machines 1 which were situated at strategic points, providing what was I suppose the architectural blueprint for the musical performances. Hence the term Raumpunkte, quite literally “points in a room”. The disc gives us the full 32-minute show, preceded by a number of short rehearsal workouts; all equally enchanting and mysterious in their rather eerie, muffled and blended sound.