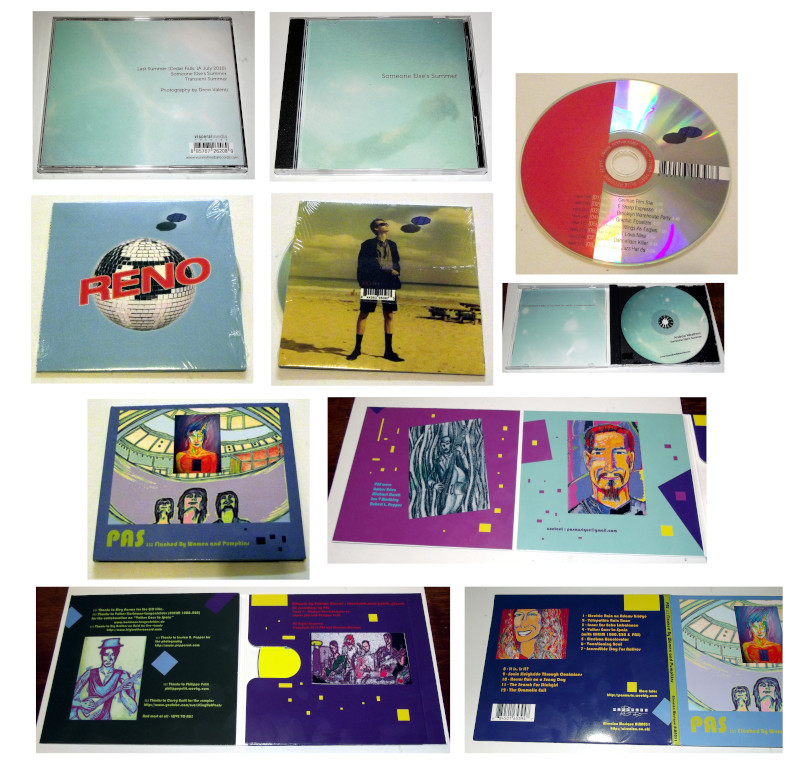 American musician Andrew Weathers is not speaking lightly when he names his CD Someone Else’s Summer (VISCERAL MEDIA RECORDS VMR007). The music was assembled during a long and arduous house move where for a long time he barely had a bed of his own to speak of, no end to the ordeal was in sight, and his dreams were doubtless fervid and tortured. His response to this rather restless and uncertain season has been to create a 45-minute drone-work of the utmost serenity and calm, as if reclaiming his own “missing” months of sun-drenched happiness and fixing them in an artistic statement. It’s the ultimate wish-fulfillment action. This lengthy minimal drone may have begun as some form of acoustic guitar music, recordings of which were deleted from his hard drive; what we hear could be a sort of process of rediscovery and rebuilding in some way, making beautiful micro-chords and tones from lost fragments of sound. As it happens there is guitar music on the disc too; it opens with about 90 seconds of rather uncertain ripple-picking as of a home recording of someone trying to teach themselves how to play in the “Takoma” manner, which is exactly what Weathers was doing. The composition then concludes with nine minutes of something even more ambiguous, perhaps a field recording of an empty room with cars passing in the distance; but our attention is occupied mostly by a rhythmic and repetitive half-sound which might be the remnants of an air conditioner going on the frizz or two lumbermen sawing a two-by-four in a field about ten miles away. I love it. I would like to think this is a poltergeist tape, a ghostly impression of Weathers engaging with his guitar practice while his summer months dissipate away in the atmosphere, and a stern John Fahey looks down from guitarist heaven. From 11 January 2012.

Frank Rothkamm‘s Reno (FLUX RECORDS FLX15) feels like a joke I don’t quite “get”. This German experimenter based in Los Angeles has excelled in providing witty tongue-in-cheek sleeve notes to his own releases of electronic music, sometimes so convoluted it’s impossible to tell when the joke leaves off, if indeed it ever does. Reno is no exception; the written insert would like us to entertain the notion that’s it’s music for a futuristic, superhuman ballet, and was executed using a program on an old Atari system connected to a suite of synths, drum machines and sequencers, which we are invited to view as an “orchestra”. Rothkamm refers in passing to rave culture in San Francisco, to New York downtown music producers, and to a genre laughingly called “Beefy House”, a term coined to express the idea that this music “has meat on its bones”. In spite of all this good natured and chortle-worthy contextualising, all I hear on the record is very average identikit disco music. Wha…? Arrived 5 January 2012.

Another nice item from PAS, sent to us by main man Robert L. Pepper of Brooklyn. This unusual and eccentric band of experimenters have released albums on their own PAS Music imprint, but Flanked By Women And Pumpkins (ALRN031) happens to have been picked up by the UK label Alrealon Musique. The notes here speak of “textures” and “collages”, and the music here does indeed taste about as rich as an overpacked pastrami sandwich from the Carnegie deli. The quartet of players never stint on layering on thick swathes of electronic and electroacoustic weirdness, and there’s not a moment of dead air or unfilled space on these 12 tracks of instrumental diablery, each one replete with the sort of surreal title that, if they’d been used for paintings in an art exhibit, would have culture-hungry freaks forming a line for ten blocks from the Guggenheim’s main entrance. PAS may not have developed a recognisable signature sound as yet, but I like the slightly rough edges to their music which I take as an index of their eagerness to explore and experiment, rather than spend 85 hours in the studio fruitlessly polishing the sound of a single synth track. A captious listener might complain about the half-finished meandery nature of these unkempt groaners, and start asking reasonable questions about editing or concision, but I think this is also a large degree of the charm of PAS. And while other releases of theirs have left me feeling a bit queasy with their indigestible sound, this Pumpkin record sweetens the deal with its peculiar and eccentric bursts of humour, both in the track titles and the occasional oddball voice sample which lets you know the creators are not trying to shock or offend you, just welcome you into their private worlds of half-creepy, half-hilarious antics. In short, imaginative goofball electronica with good pulsating rhythms, dayglo colours mixed with black gloss paint, and shades of Krautrock elements to boot. Excellent colourful images by Patrick Glassel too. Arrived here on 25 January 2012 but not released until April this year!