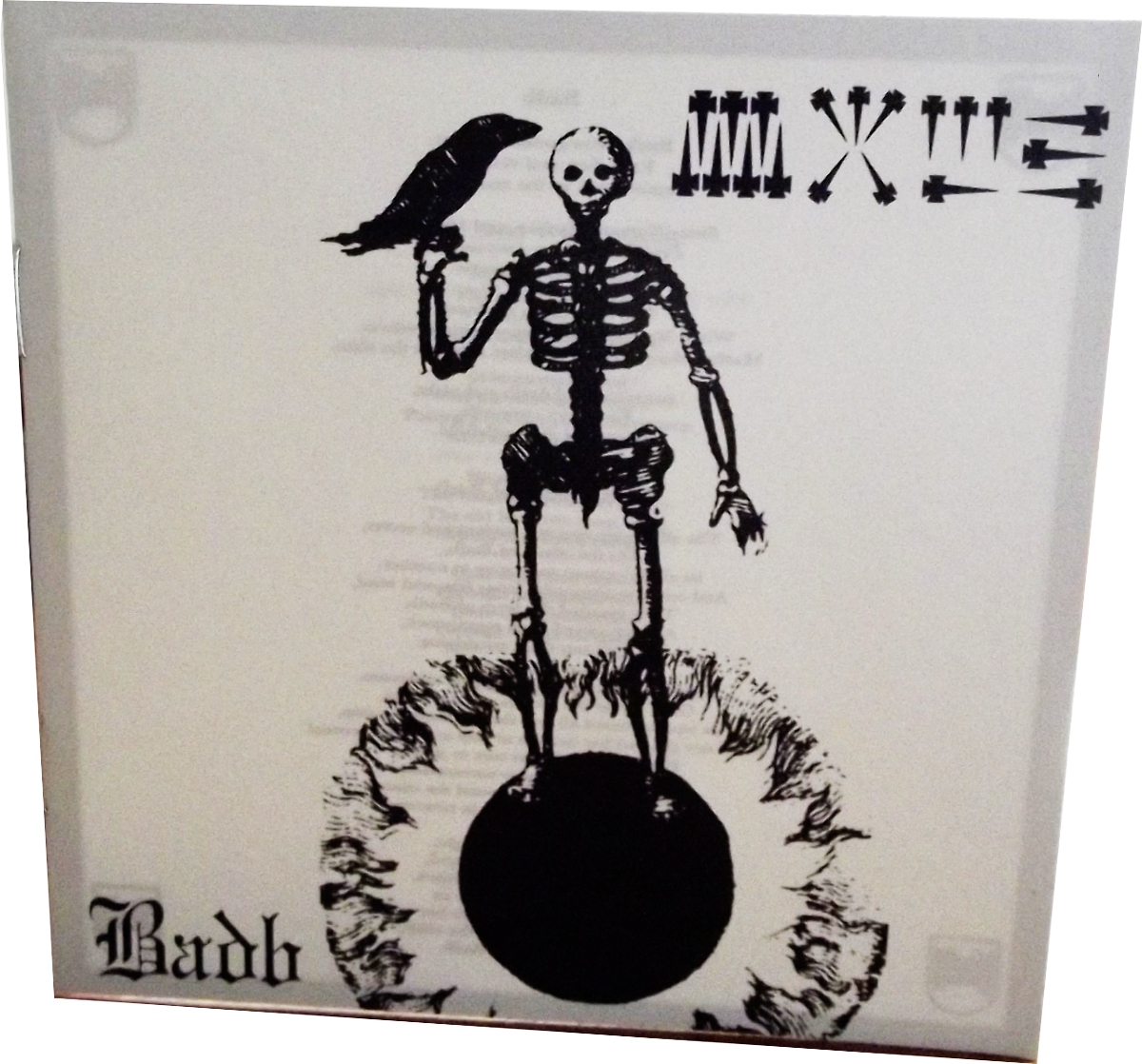 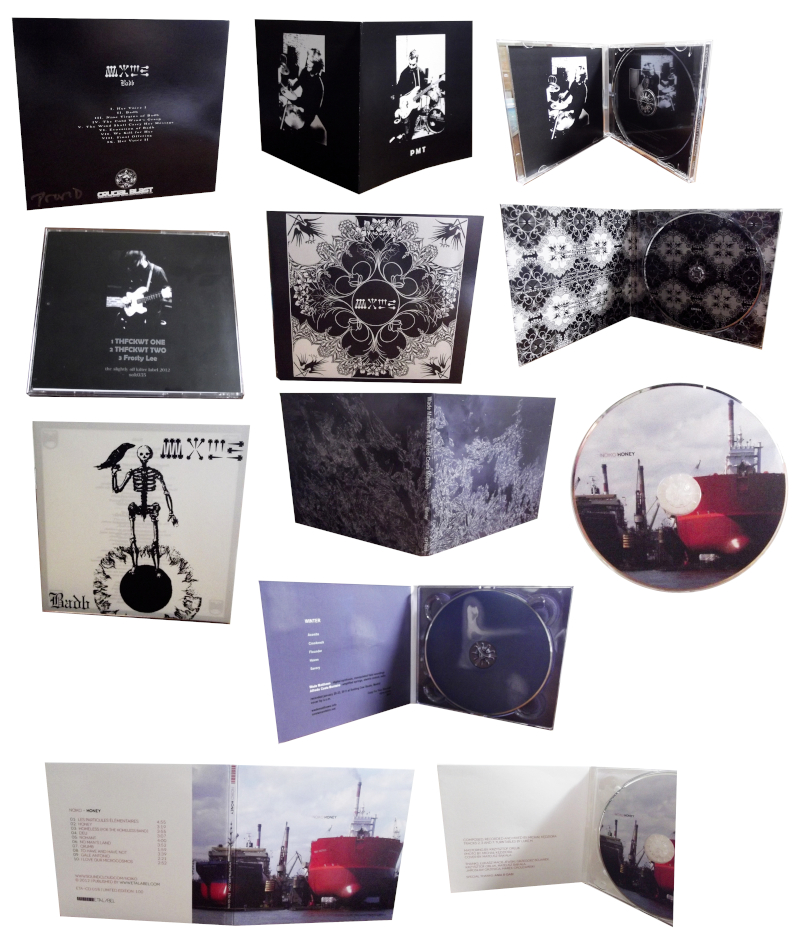 The English trio of PMT play bass drums and guitar in a decidedly odd manner on Frosty Lee / THFCKWT EP (SLIGHTLY OFF KILTER SOK035). Not to say they’re especially loud or even “raw & primitive” in the manner of a latterday rockabilly combo. Their playing is full of stops and starts, half-patterns, lumbering and lurching about, as the trio move from uncertain doodling to confident riffing and back again, often in the space of a single 10-minute track. I suspect some of this unusual dynamic is due to simply turning the recording device on and off, but (for two tracks at least) that is an integral part of the listening experience of this bizarrely charming slab. In 1981, PMT probably would have been selling hundreds of cassette tapes of their brand of naïve sub-post punk discordancy. However it’s also clear that these players, who recorded this record in a South London tower block and a barn in southern England, have taken the 1990s “slacker” attitude and turned it into a philosophy that guides their every musical thought and action. The first two tracks have the insouciant druggy rehearsal-room feel, while ‘Frosty Lee’ is a more straight-ahead free-form rocky jam with the kind of exciting live edge that almost makes me think I’ve discovered a rare 1971 heavy-prog underground guitar group to match Captain Marryat. Nifty, edgy, vital playing throughout. Added bonus – no effects pedals whatsoever as far as I can hear. This arrived 17 January 2012.

Further heaviness now from Wold, the obscure Canadian Black Metal trio. I may not have reported this in the pages of The Sound Projector, but I am a huge fan of Wold. When I first heard their 2005 release L.O.T.M.P. I thought I was dreaming – they have a fascinating nightmarish delirious quality to their intensive noise, like a much less benign version of the over-produced guitar wall records of My Bloody Valentine. Imagine my delight on receiving Badb (CRUCIAL BLAST CBR91) which predates L.O.T.M.P. by one year and was originally released on cassette by Regimental Records. This November 2011 reissue is thus most welcome. The trio of Obey, Operationex and Fortress Crookedjaw may or may not use conventional guitars and amplifiers to generate their scalding blasts, but the unsettling and nauseating properties which I cherish are still very much to the fore. They are kings of controlled distortion, using that element as a potent weapon of destruction, rather than a dark cloud to mask their activities. Behind walls of feral, manic riffing and vatloads of reverb effects, uncanny ghost notes and impossible musical sound events are unfolding and taking wing like verdigris-encrusted demons. At front of mix, the singer is ripping out his own lungs and tearing out his teeth via a painful throat operation in attempts to convey the brutal devastation passing before his eyes. Which brings us to the theme of Badb, which is attached to “the mythology of the war goddess”, an unpleasant spirit which apparently “lurks at the edge of the battlefield”. According to Irish mythology, she often took the form of a crow, ever-ready to peck out eyes and strip flesh from the bones of the fallen. More pertinent to this record is Badb’s ability to bring fear and confusion to the enemy, two emotions which will certainly flood your senses within seconds of hearing this wild album. In retelling the fantastic tales of this war-blackened shroud-hag with wings, Wold appear to me to be bringing back martial forces from ancient history (Alexander The Great, or even earlier) and somehow replaying them through modern technology. A painful and aggressive listening experience, but also a cathartic torture session that simultaneously celebrates and exorcises the horrors of mortal combat. Issued with a booklet of lyrics; the cover design for the booklet is just superb, a stark graphic showing Death astride a blackened and incandescent globe, with a carrion crow perched on his bony claw. What more potent image of nuclear holocaust could you wish for? Arrived 30 January 2012.

Another record which achieves similar degrees of bleakness to Wold is Winter (COPY FOR YOUR RECORDS CFYR009), by the duo of Wade Matthews and Alfredo Costa Monteiro. They do it by means of process art rather than extreme black metal, and they use a combination of amplified springs and motors, a radio set, digital processing, and field recordings. Nowadays the above shopping list is admittedly quite commonplace, but Wade and Alfredo destroy a lot of the competition with these highly textured and dynamic assemblages, their brows set permanently in a frowning and scowly attitude. Generally, the sound of Winter is quite heavy and rich, without a trace of the wispiness or uncertain dabbling that ruins the efforts of lesser men. Through crackle, burr, intensified drone and alien-sounding effects, the pair plod on through snowy wastes and cross frozen lakes wearing only raggedy newspapers on their feet, intent on reaching a lonely shack in the middle of nowhere. Potent and deeply mesmerising abstract greyness abounds in this music. One of three beauts received from this New York label on 16 January 2012.

Sweet Honey in the Rock

The Polish composer Michal Kedziora took about four years to produce all the tracks on Honey (ETALABEL ETA-CD 018), working under his Noiko guise and assisted by the turntablist Luke M. on three tracks, with mastering by Krzysztof Orluk. I suppose it took a long time to complete because it’s such a painstaking assemblage of samples, taken from a range of conventional instruments – clarinet, guitar, percussion, piano – which were then refitted into these pleasant and enjoyable instrumental jigsaws. It’s kind of like an avant-gardish ambient record with slow irregular beats and looped patterns, almost the sort of backdrops that Portishead would also have spent years working on for their second album before emerging from their windowless lair and waving the white flag to the representatives of their record company. The overall “fuzzy” vibe that I’m getting probably comes from varispeeding – a lot of the tracks are like dreaming about a walk through a 19th century drawing room filled with orange-coloured glue, only to stumble upon a wind-up musical box brought downstairs from the nursery. But then Luke M. adds the customary vinyl crackle sound as part of his contributions, adding greatly to the gentle hypnotic atmosphere with its lulling rises and falls. Noiko is not afraid of melody or even tastefulness, elements once considered to be the enemy of the avant-garde; indeed it sometimes feels like, given enough time, his skeletal chord frameworks could easily resolve into the chords for a tin pan alley song or jazz standard. These sentiments are not unforgivable, as the record was inspired by the birth of his daughter, although I can’t quite square those family-centric emotions with the photographs of the 8,000 ton merchant vessels on the cover. The record makes a virtue of the old-fashioned analogue equipment that was used in the mastering process, including a “tube saturator” invented by the engineer Andrzej Starzyk. Arrived 30 January 2012.