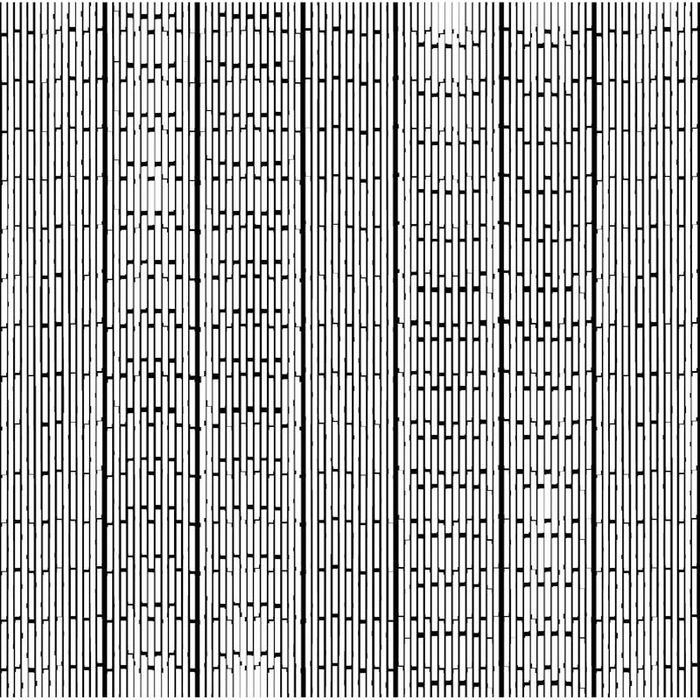 Four side-long pieces of excellent instrumental work from the trio Tetras on their double album Pareidolia (FLINGCO SOUND SYSTEM FSS-017). If you think 20-minute tracks are excessive, you’re actually getting off lightly, since these guys (who first assembled in 2009) usually opt to play for at least one hour or longer when they hit the performing arena with their set-up. It’s the percussionist Jason Kahn, with two Swiss players – Jeroen Visser on the electric organ, and the bassist Christian Weber. Like all well-versed contemporary musicians, they manage to incorporate a large bundle of modernist influences and aspirations into this simple arrangement, and are informed by experimental rock music, improvisation, free jazz, classical minimalist composition, and basic drone music too. Just take the first track for instance. The “surface” impression is that of a tight percussion-heavy jazz unit, until you listen in more closely and you discover Weber is playing acoustic bass figures that are as repetitious and menacing as early Pere Ubu records. Kahn likewise is filling all available space with his circular drumming patterns, leaning heavily on the bass toms (other reviewers have made a viable Jaki Liebezeit connection here). Meanwhile Visser is steadily pumping out basic two-note drones on his organ with a near-mechanical insistence and earning himself comparisons with Gareth Williams of This Heat. So far this is like abstract impressionist painting forced into a tight Mondrian grid.

Side 2 starts out as minimalist noise – an attenuated and coarse organ sound wheezing steadily over a small chiming percussion riff, the players maintaining their iron concentration with the implacable will of a grand inquisitor. The organ riff, perhaps assisted by the bass, grows into a more unsettling growler, hissing with serpentine threats. Side 3 is another manifestation of the trio’s protean skills, beginning as a monstrous cloud of thick droney noise, then settling into a skeletal riff where the tension and dynamics between the players are incredible; everything seems to depend on split-second responses and careful listening (which is what good improvisation is meant to be doing anyway). Few conservative jazz musicians, regardless of how advanced they may be, would allow themselves to be this simple; few rock musicians could play with this much grace. I’m very glad to see the organ returning as a credible instrument in this area (admittedly, the only example I can think of is Alexander Hawkins and Decoy), and while I can recommend this record to all lovers of organ music, it’s also fairly matchless as an example of tight, concentrated and completely natural improvised group playing, where the results are mesmeric and endlessly fascinating. Arrived 23 January 2012. The cover is apparently a luxury silkscreen artwork printed on thick foldover card 1.

Ticking away the moments…

I’ve recently come across an odd French film from 1972, Les Soleils De L’Ile De Paques. I haven’t watched it yet but I have the odd feeling that Beyond Man And Time (GENTLE ART OF MUSIC GAOM 009), a recent release from a German art rock band RPWL, might make an appropriate soundtrack. This unashamed “concept album” has high ambitions – the press notes mention Nietzsche, Plato, and philosophy, and the plan is to construct nothing less than a “topographic map of the new world”. Musical themes have been written for all the characters that appear on the journey, and each one also stands as an allegorical symbol – The Keeper, The Scientist, The Creator, The Fisherman, to name but four. As an unapologetic fan of progressive rock, and an unyielding defender of Pete Townshend’s decisions to create lame “musical themes” within his rock operas, I have no problems with any of this so far, and anything that namechecks Tales From Topographic Oceans (whether subconsciously or no) is aces with me. If only RPWL’s actual music were more exciting; all I hear from Yogi Lang and his crew is rather twee and tasteful songs with bland melodies and sung with audibly wide-eyed optimism, and despite the promises of eastern percussion and moog solos abounding, the album is mostly identikit Euro-rock, the sort of thing you might hear accompanying a fashion show in Hamburg, or a Berlin cable TV show. Too much politeness, not enough excess. The musicians are more than competent (in fact their technical skills make the entire proposition almost too smooth in places), and I don’t doubt Lang’s sincerity or his ideals, but if this supposedly “non-conformist” record really is “a plea for original thinking, dissent and liberation” then I think we have a right to expect music that is a good deal more challenging than this. Even the cover art is disappointing, uncertain whether it intends to be profoundly symbolist, or merely comical. Arrived 12 January 2012.

Words Are Not As Strange

Astonishing and highly original chamber-jazz from the Michael Vlatkovich Ensemblio, on An Autobiography Of A Pronoun (PFMENTUM CD067). I never heard of Vlatkovich before, but he’s been composing music for thirty years and has twenty releases in his catalogue, many of them released on his own ThankYou Records label. This Missouri-born trombonist, composer and arranger has been based in Los Angeles since 1973, and has performed around the world with numerous collaborators and groups. Working here with some topnotch American musicians (Jeff Kaiser, William Roper, Brian Walsh, Wayne Peet and many others), Vlatkovich delivers some of the most fascinating music in the jazz vernacular I’ve ever heard. His method inevitably involves the integration of improvisational passages with composed passages, but he stresses in his notes to this release that he has no interest in discussing his techniques, and would prefer his music to be “experienced emotionally”. Elsewhere, I learn that his structures tend to be simple and minimal, which is encouraging news and suggests that he’s found a way to power his compositions in such ways that the energy of his collaborating players is harnessed to the full. When I think of other musicians who have done similar things, e.g. John Zorn, Braxton or Cecil Taylor, the results are always powerful and effective, but you often have the sense of the “structure” in place which is driving everything; sometimes you can even hear the joins. Vlatkovich succeeds in hiding the joins, and the music just sweeps you away as directly as anything by Duke Ellington or Charles Mingus. Each piece is a delight of odd dynamics, concentrated musical information, and evidence of the many “variables” the composer uses in his integration actions. The track titles (see back cover) may strike you as a bit contrived or even too “cute”, but when you hear the music I think you’ll begin to sense the cohesion of the whole package. Indeed many of these pieces, with their deliberately awkward phrasing, tricky rhythms, and highly inventive melodies, come to resemble a sort of fractured story-telling or absurdist poetry. “There is a lot going on during portions of this CD”, claims the composer, and that’s putting it mildly. What a very pleasant discovery. Arrived 24 January 2012.