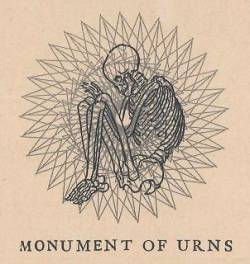 Mysterious and reclusive act Monument of Urns was in the habit of releasing his music in the form of 3-inch CD-Rs of about 20 minutes in length and this first album “The Ancient Method” set the template for other Monument of Urns releases to follow. “The Ancient Method” is one track of the same title as the “album”: a very long and punishing, repetitive piece of slow, hard yet regular rhythms and yowling guitar drones. Riffs and percussion alike rise and fall with a huge crash like slow heavy waves of thick lava goop smashing against walls of iron holding them back. A deep subterranean whispery wraith sighs and mouths sounds that might be actual words and lyrics beneath the crushing rhythms and moaning tones. The packaging is mysterious and quite macabre yet it’s also very neatly and immaculately designed and presented.

The style of music might best be described as blackened funeral doom metal with some abstract experimental tendencies, especially near the end. A reference point might be Sunn0))) though that band has a deeper sound; another might be the equally elusive Spanish act Like Drone Razors Through Flesh Sphere, especially in the atmosphere, but without the earth-shaking booms. Some time after the halfway point, the voices start to gibber and whisper rapidly and the track acquires a feathery and weirdly deranged quality; there is frenzied savagery and madness going on among those phantom beings in the background. The music still comes at you with slow and pounding regularity, crashing again and again, wearing down your resistance.

It’s not a varied track, it’s quite monotonous and it may not be MoU’s best work, but I hazard that “The Ancient Method” is the first of a series of similar tracks that might eventually turn out to be chapters in an on-going masterwork and perhaps at some stage in the future the man guarding the secrets of Monument of Urns might decide to put all the music released under that name on one CD or a double CD set. Only then will the meaning or meanings behind the music of this droning black doom project be fully revealed and half the fun for fans of this project may well be to work out the MoU main-man’s message if any within the music before then. As it is, the tiny CD-R format is appropriate for this project.

The label is equally as mysterious as the man and his project, having just seven releases to its name and all of them by Monument of Urns and a related project Bird of Omen.