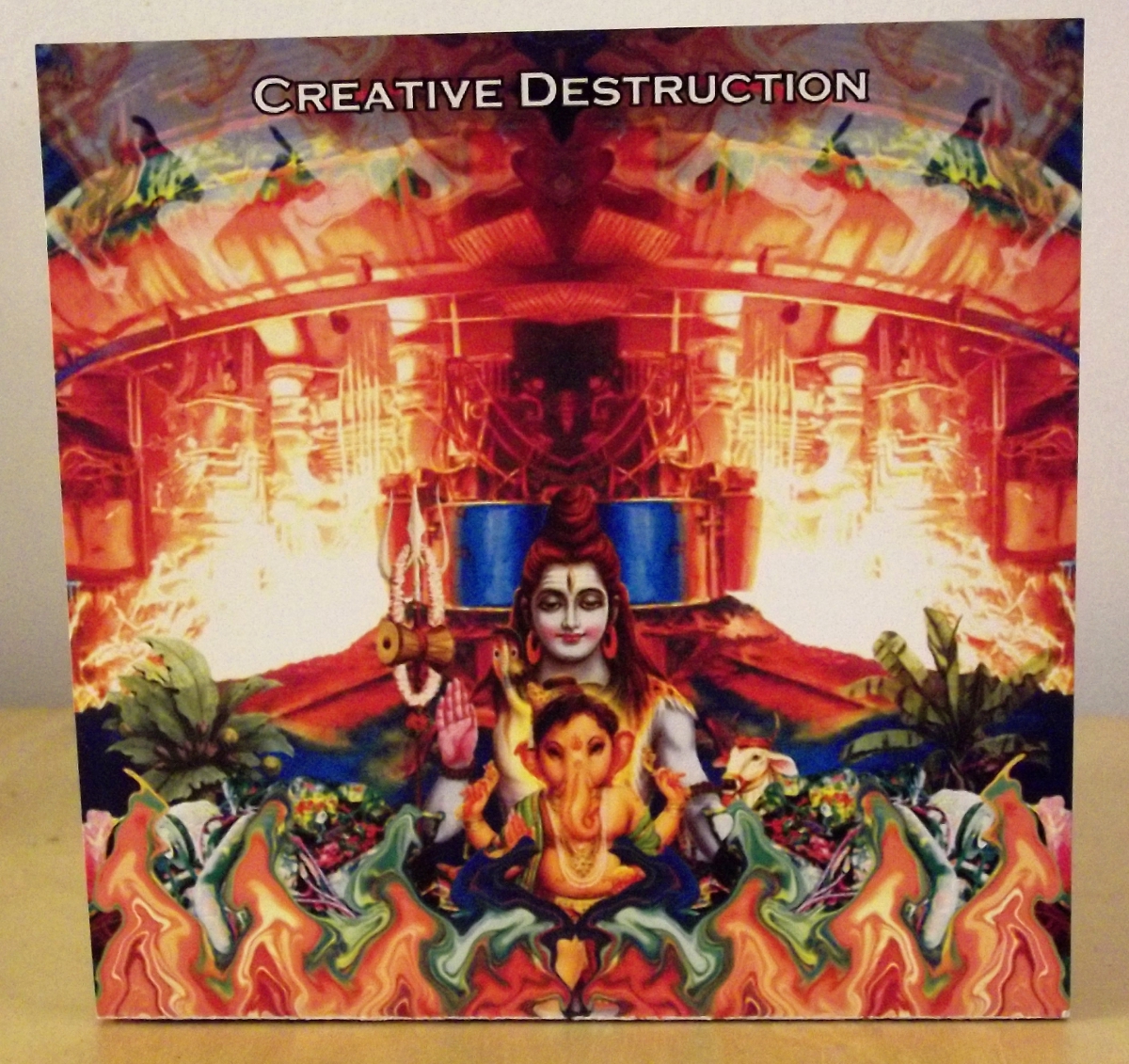 Creative Destruction (HYPNAGOGIA GIA07) is a two-disc set of Japanese harsh noise which slipped into the collecting sack on 23 December 2011. It certainly ruined my Christmas. It was compiled I assume by Paul Coates, seemingly with the intention of simultaneously punishing and disorienting the listener with impenetrable, bizarre, and unapproachable sounds. A lot of it seemed at first sight to be drawn from the “classic” 1990s period of Japanese noise, when giants stalked the earth and also saw fit to tear your head off with ferocious electronic bursts from their volcano-like heads. Not everyone here fits that profile, though. Kazuma Kubota is a relative “new boy”, seems to have been active in in the last five-six years, and with his ‘Beginning of the End’ (Parts 1-3) he delineates a mechanised apocalypse by dabbling in the junkyard with metallic parts, alternating his actions with shrill feedback explosions. A puzzling, weary and resigned air already sets in; a depressing way to open the compilation.

Government Alpha restores more sizzle to that steak as he dips his wriggling tentacles in the long trough of acidic despair. Some eight minutes of ‘Writhe in Agony’ are followed by over ten minutes of ‘Ovum of Foresight’, both cuts reeking of delicious mad electronic music where any control units which may have once existed are being willingly sacrificed on the altar of brain-meltdown. This solo act is a bona-fide 1990s god of Japnoise, but is regarded by some as an upstart aiming to kick greater gods like Merzbow and Masonna off the top of the pedestal.

Two tracks by Incapacitants (Toshiji Mikawa, sometimes joined by Fumio Kosakai) are enjoyable slabs of tabletop mayhem, still chaotic in the extreme but somehow bound in by the multiple looping effects that seem to be whirling before us like imaginary dervishes. Where Government Alpha wants to scald off your skin with boiling lashes, Incapacitants are content to grind our bodies down into pepper, the slow way. At least, that’s the case on Part 1 of ‘Fall Of Olympus’; the second part is much wilder, an unmanaged explosion of dangerous fireworks, space rockets, and ICBM missiles. I hesitated before ordering Box Is Stupid from Pica Disk in 2009, and never got one in the end; I’m still not sure I would ever play 10 CDs of their “work”.

Ahh, here’s Defektro closing out disc one. Three relatively short tracks in the 5-6 minute area and with interesting science-fiction / violent / psychedelic titles too. A new name to me; sometimes calling themselves a “Noise Army”, this is a trio of fun-loving tykes who have been twiddling their knobs since about 1998. They veer from unvarying feedback in the “HNW” style to somewhat more textured industrial rumble-n-loop exercises, ending their segment with a bleak utterance on a more minimal and menacing tone.

As we pause for a cuppa we can also admire the astonishing artworks by Yasutoshi Yoshida. The colour front covers are strong, but the inside collage is a real dazzler, collaging Indian deities with insects, bones, and machinery. I kind of regret having all that typography superimposed on this masterpiece. Imagine if it had been a double LP gatefold. I don’t think the world would ever recover from it.

On disc two we have Thirdorgan, a solo act of early 1990s vintage to be sure. His three segments of ‘Die Disziplin Für Die Kreative Zerstörung’ are perfect examples of sub-Merzbow powerhouse malarkey, with barely a breathing space to be had in the relentless explosive energy, except for a lovely interlude of UFO-interior effects for two minutes in the middle. K2 is another destructo-merchant with 15 minutes of ‘Reactors of Raging Goddess'” which has a shade more interest in dynamics than Thirdorgan, but is still as dangerous as a power cable flailing about in your living room with three rhinoceroses. Like many of the names here he has a huge back catalogue, in his case going back to 1993, but the most recent thing I heard from him was a split with Maaaa. The three tracks by Astro are a high spot for me; his all-white vinyl M.S.G. Of Electronics Wave from 1997 is a personal fave. Old Hiroshi Hasegawa certainly has the violence of all the loons named above, but he also manages to produce noise that somehow has more weight and density. Maybe it’s simply that he uses a bit more bottom end to round out the harsh feedback attacks. There’s more incident to Astro too, internal loops and crazy layers and absurd yelps of electronic absurdity, to mellow out the effects of being passed eight dozen times through an industrial-sized buzzsaw.

Lastly, there’s our good friend Guilty C. also called The Guilty Connector, another relative “youngster” on the noise scene who’s been doing it for maybe 12 years now. At one stage I wanted to try and “collect” his music, so interesting did the many hats he wore seem to me; within this genre, he’s one of the harder names to pigeon-hole or describe adequately. I soon gave up my dream of collecting his CDRs and tapes, but one day a mad collector somewhere in the world will leave me his full set as an inheritance when he writes his will. As to Guilty C.’s ‘Black Nights, Muddy Confusions’, it’s one of the few quiet moments on this mostly boisterous set, but no less menacing. In fact it develops into the familiar harsh noise assault eventually, but does so at a very slow pace. Imagine being eaten by large snakes in slow motion to savour the feelings engendered by this ghastly music.