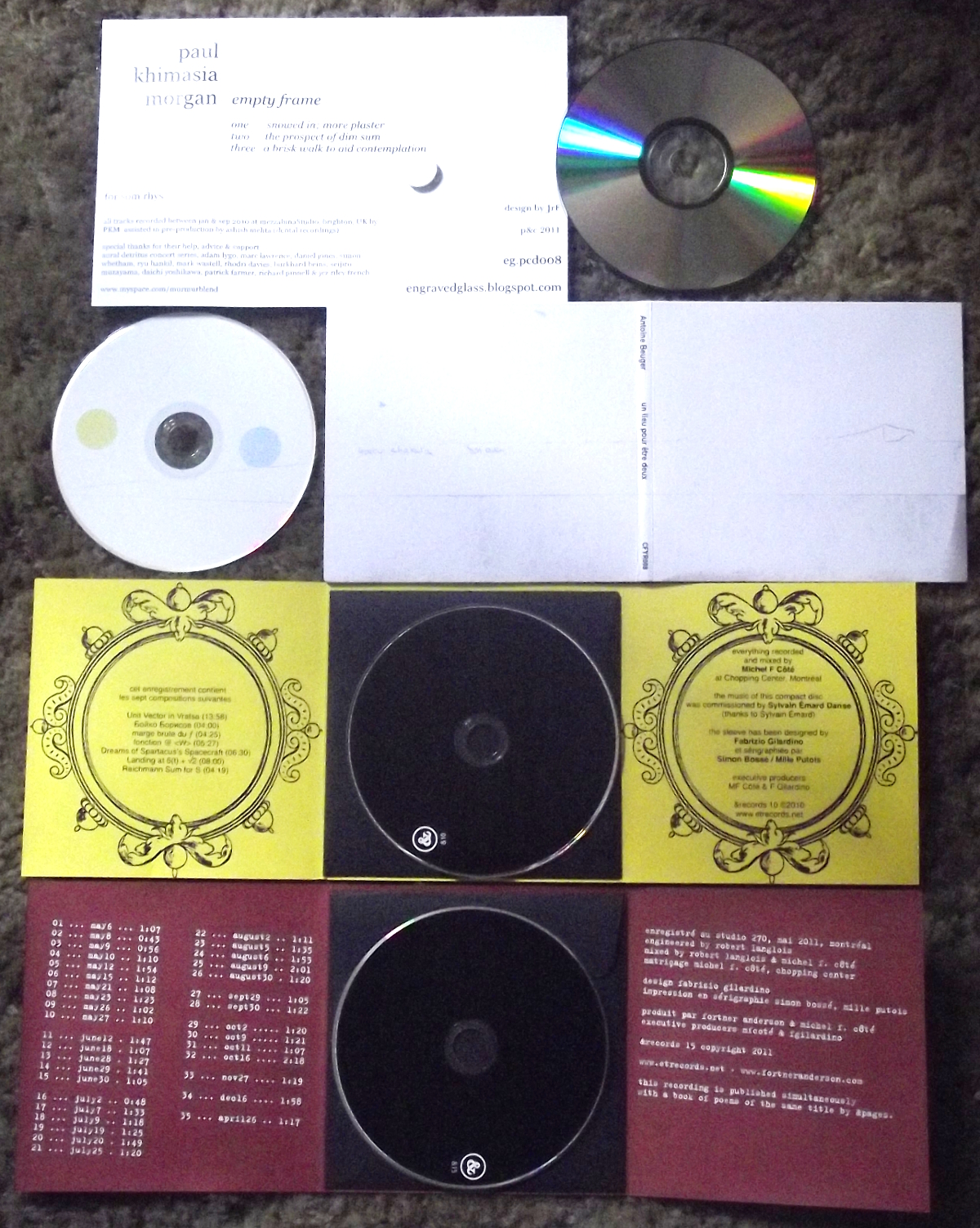 Paul Khimasia Morgan is owner of the UK’s Slightly Off Kilter label, and also occasionally makes music and sound-art himself. Empty Frame (ENGRAVED GLASS EG.PCD008) is one where he aurally professes his alignment with Mark Wastell, Rhodri Davies, Burkhard Beins, and others of the “reduced” playing school by making three tracks of extremely quiet and mysterious process-based music, floating in a midway point between improvisation and that unclassifiable activity that involves the manipulation of small objects, and tiny microphones to capture the sounds from those manipulations. On the first track there may be some motorised components involved, but the second cut ‘The prospect of dim sum’ is more of a serene, slightly processed, electronic drone whose origins are untraceable by the ear. The label is largely a showcase for the work of its owner, Jez Riley French, who declares his love for “infinite detail” and sounds that are “often overlooked and hidden”, but he has also released work by Richard Kamerman, Anne Guthrie, John Grzinich, and many others. From 17 January 2012.

One Speak for Both

Speaking of Mr Kamerman, here’s another release on his Copy For Your Records label. Un Lieu Pour Être Deux (CFYR) is credited to Antoine Beuger, who appears to be a Dutch flautist and composer associated with the Wandelweiser Group, an international team of hard-core ascetics who profess a very extreme doctrine of silent music. We’re passingly familiar with the work of one member, the trombonist Radu Malfatti who in turn has had some influence on Mattin, so that gives us some reference point; Malfatti’s testing music is sometimes the equivalent of a death sentence, executed with incredible slowness. The composition (if such it be) by Beuger is realised here by the guitarist Barry Chabala and Ben Owen (of Winds Measure Recordings), who plays synthesizers and contributes field recordings. The 47-minute work seems to have been executed in a single day in New York, and the field recordings are all urban in nature; the distant sound of traffic forms the basis for much of the piece. I think there may be some sort of “imaginary map” or psycho-geographic connotations to decode as well, but the minimal information and cover in this instance is giving nothing away. As a musical performance, it’s quite some way from any familiar sort of improvised music, and the players are both slow, deliberate, and almost cautious in their utterances, drip-feeding small chunks of synth tones and guitar notes that are studiedly inscrutable. I think we have to process this as a conceptual composition, where even the field recordings don’t mean what they appear to mean, and most aesthetic pleasures are being strictly denied to us, or at best being rationed out very carefully. To put it another way, this seems to be a rare use of field recordings as a compositional element, rather than something to be heard in its own right, which is an encouraging development. Strangely compelling to listen to, this perplexing work holds us in a state of considerable tension and concentration for its duration. 150 copies only and mastered by Giuseppe Ielasi, an apt choice as he represents the Italian wing of this school of emptied-out music. From 16 January 2012.

Two more of the items from the & Records label of Montreal which arrived here 20 January 2012. The record Ave W (&10) is credited to Tiari Kese, who apparently plays all the instruments – keyboards, French horn, electronics and samples, but it’s more likely to be all the work of Michel F Côté, who’s a Canadian electro-acoustic composer. A biography of alleged Bulgarian Tiari Kese can be found online, but with its Stockhausen, Beatles and Debord connections it’s all too good to be true and is probably just another internet hoax. The record does have one glorious track title, ‘Dreams of Spartacus’s Spacecraft’, but I mostly found it a rather turgid listen, directionless and shapeless digital layers of drone that amount to less and less the more they’re piled up. The instrument-playing has been processed and denormalised to an extreme degree, sucking the humanity out of everything until we’re left with echoed and orphaned horn tones floating aimlessly on a sea of samples, light distortion and glitch.

The City Wears a Furry Hat

Even less enjoyable is Solitary Pleasures (&RECORDS &15) by Fortner Anderson. It comprises several short 90-second vocal recits by the poet Anderson while accompanied by electro-acoustic noise played by a non-jazz trio of Alexandre St-Onge, Sam Shalabi, and Michel F. Côté again, this time playing the drums. The release accompanies a book of poems published at the same time. We’ve encountered Fortner Anderson before in TSP15 where we noted the baffling Six Silk Purses, recordings of his spoken word exploits provided to sound artists to add their musical interpretations; in fact the same musicians were on that release too. Fortner’s short couplets are expressed here in diary form, each segment beginning with a calendar date announced in solemn tones, before proceeding with his free-form observations such as “I had forgotten the calculus of transcendence…”, alternating with mini-stories about life in the city and the characters he meets. It all feels oddly old-fashioned, like one of the forgotten Beats. Fortner attempts some jazzy syncopation in his delivery, even as the music drags itself along like a three-legged dog on a hot afternoon. Kenneth Patchen it ain’t.