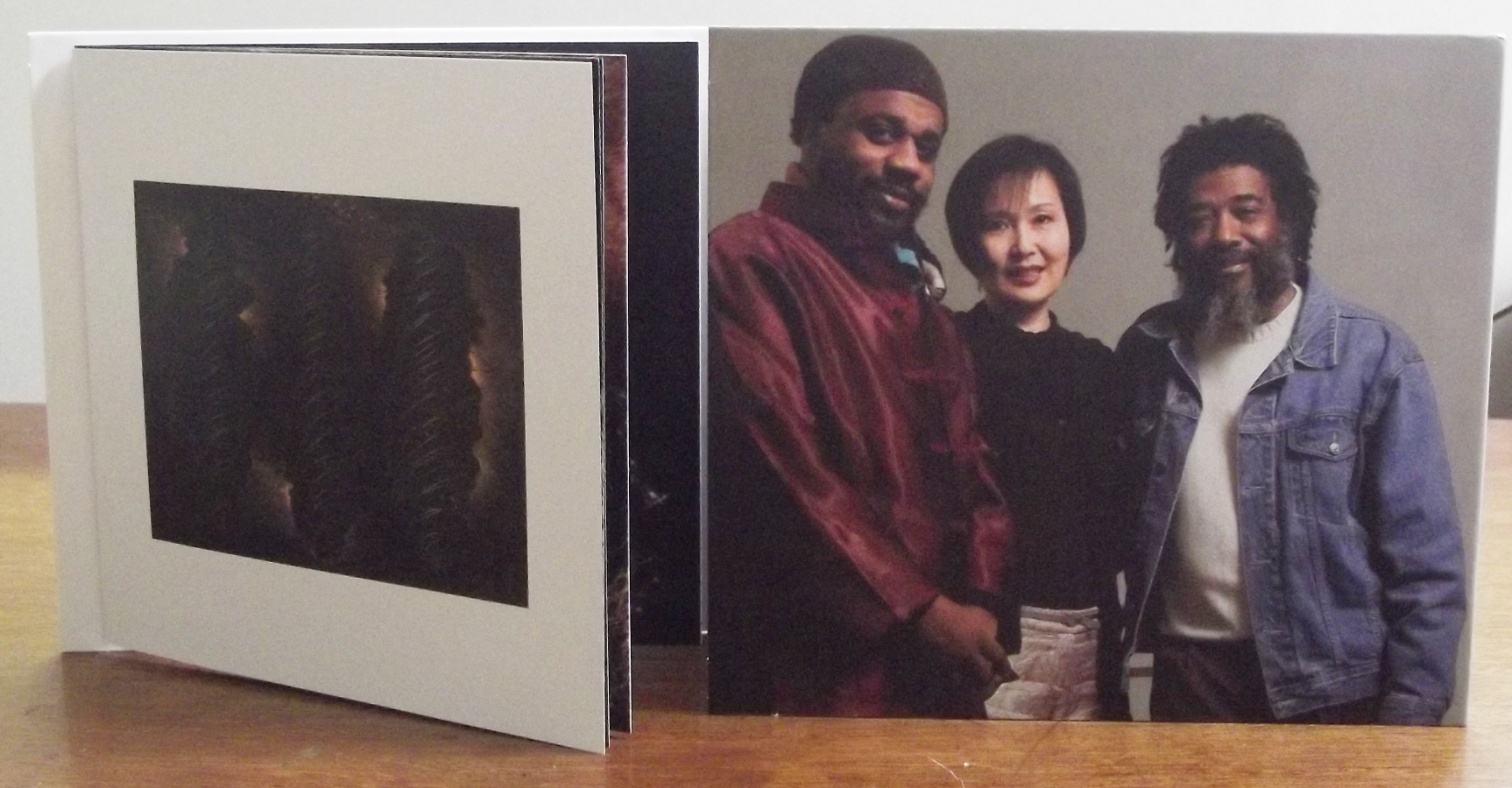 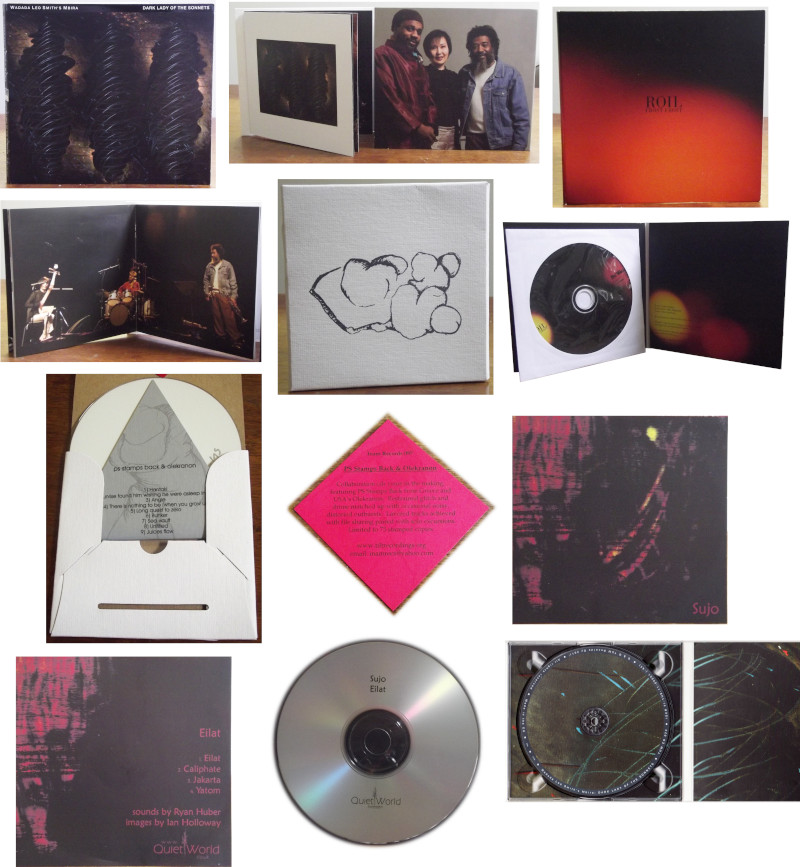 Wadada Leo Smith is an Afro-American free jazz major player whose work is lamentably under-represented in my so-called collection, outside of his appearance on the Creative Construction Company LP of 1975. In the 1970s he played with experimenters Anthony Braxton, Leroy Jenkins, Marion Brown, and many others; then the 1980s saw him making explicit musical statements and celebratory fanfares about the African experience, such as Rastafari in 1983, Human Rights in 1986, and Procession Of The Great Ancestry in 1989. At all times his music never lost sight of (a) the blues, which he considers to be at the root of everything he plays (Louis Armstrong is his chief progenitor) and (b) the importance of nature, as reflected in titles like ‘The Flower That Seeds The Earth’ and ‘Grainery of Pure Earth’. All the above themes continue to unfold and develop in Dark Lady Of The Sonnets (TUM RECORDS TUM CD 023), a new set of compositions for his trio Mbira, featuring the drummer Pheeroan akLaff and the Chinese musician Min Xiao-Fen who plays the pipa (Chinese lute-like object) and sings on the album. Her astonishing and other-wordly sounds are showcased all over the album, but especially on the title track where she intones the lyrical content written by Smith, indirectly inspired by Amiri Baraka’s prose-poem about the life of Billie Holiday – to whom this dance ballet piece is dedicated. ‘Zulu Water Festival’ expresses the ongoing Africa and Nature themes, intended as a near-cinematic vision of ‘60,000 Zulus dancing’ alongside a 50-mile wide lake. And ‘Mbira’, another creative dance ballet work, draws its influences from the spiritual music of the Shona culture in Zimbabwe. That’s a lot of resonances and layers of cultural meaning to digest, and probably tends to make the music appear more complex than it actually is. Fundamentally, this is is a trumpet and drumming album of remarkable directness, with Leo Smith blowing his uncomplicated notes on top of a very dynamic percussive framework. Balancing out the bluster and assertiveness of the two males in the group, Xiao-Fen inserts her delicate and graceful notes in the spaces that remain, as surely as a spider spinning cobwebs of silk. Another well-recorded and handsomely presented release from Petri Haussila’s Finnish jazz label, which arrived 20 December 2011.

Roil is the trio of James Waples (drums), Mike Majowski (double bass) and Chris Abrahams (piano), all Sydneysiders who formed their jazz improvisation group in 2007. Frost Frost (BO’WEAVIL RECORDINGS WEAVIL42CD), recorded in 2010 and 2011, demonstrates their unique approach to playing together – mixing up atonal, scrapey and noisy improv with more melodic moments that at times hark back to Bill Evans or even Oscar Peterson. They sometimes do this genre-hopping within the same track and are not afraid of being accused of eclecticism or stylistic diversity. ‘The Swinging Treatment’ displays some high energy Keith Tippett-eseque piano runs mixed up with some slightly more melodic fills, and ‘Super Vicim’, while starting off quite bright, colourful and upbeat, ends on a more ambiguous note as the pianist rummages around the lower registers like Cecil Taylor in a very bad mood, while the bassman grumbles in sympathy and the drummer’s obsessive noisiness comes in very handy. My personal taste is for these darker excursions, but they are rare – mostly the record leans towards melodic and modal doodling, embellished with percussive effects.

Found another one from the Inam Records label, which arrived 14 November 2011. The label’s own Olekranon (Ryan Huber) joins forces with the Greek electronic glitcher-fellow, P.S. Stamps Back (Iason P.). Nine tracks on PS Stamps Back & Oelkranon (INAM RECORDS 097 / TILT RECORDINGS), of which six are actually collaborative – done by the file-sharing method. It’s an unsatisfying blend of elements – over-familiar sounds, detuned drones, off-key pitches, sequencing, beats, filters, and general noodling around without really getting anywhere. Olekranon’s penchant for over-amplified and distorted noise is occasionally allowed to surface, but it’s mostly a collection of unappetising electronic tones. The collaboration never really takes off; the ideas do not gel, the pieces do not fit together.

Ryan Huber also records as Sujo, and he made Eilat (QUIET WORLD NINETEEN) for Ian Holloway’s Quiet World label. This little release is notable for its monstrous title track – ten minutes of insane stoner rock mixed with coarse electronic droning keyboard elements and zombie-styled drum-pounding, this recording uses amplification and distortion to tremendous bludgeoning effect. A fine work of remorseless doom, only beaten into submission by its follower ‘Caliphate’, a beast which is another exemplar of distorted and silted-up noise but is lighter and faster on its hind paws. The need for expression is almost being stifled under the weight of its grandiosity – this ten-headed monster breathes much smoke and fire and nearly sets us alight in the process. ‘Jakarta’ alternates guitar-noise excess with thick and heavy drones, chanting voices, and bleak synthoid landscapes, pulling uncertainly across many stylistic territories; the extreme dynamics of loudness and quietness are overpowering, and the same device is used on the unsettlingly shrill ‘Yatom’. It’s a wonder Sujo can breathe when he’s making these suffocating multi-layered recordings, as he strives at times to out-sludge Nadja in the dangerous game of overdubbing and stacking. Grand stuff. But I sometimes wish Ryan would do it in a recording studio some time; his rich work can’t quite transcend the limitations of home recording equipment.