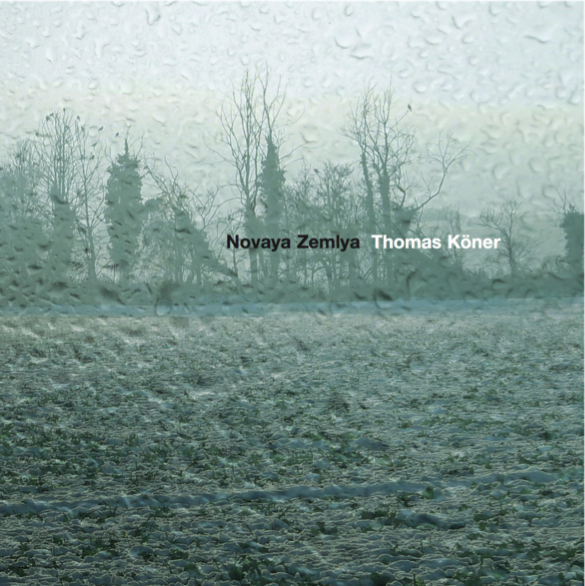 It’s of great contemporary significance that Thomas Köner has named this album “Novaya Zemlya”, after the archipelago of two islands off the coast of sub-polar European Russia north of the Ural Mountains (of which the islands are an extension) which delineate the border between Europe and Asia. The name means “new land” in Russian. During World War II, the archipelago served as a seaplane base for the German navy and in the decades following after, the islands were used for nuclear testing until 1990 when Greenpeace protests helped to shut down the program. Even so, the Rosatom Nuclear Energy State Corporation continues to conduct underwater nuclear testing in the area around Novaya Zemlya. It’s in the context of the archipelago’s history and its current strategic position, now that the melting of Arctic sea ice as a result of anthropogenic climate change means it’s possible for ships to sail north of Russia and Canada for most of the year without becoming ice-bound and for nations surrounding the Arctic Sea to prospect and drill for oil and natural gas, that Köner has released “Novaya Zemlya”: it’s an epic if very bleak and desolate statement of cold ambient minimalism, ominous field recordings suggestive of crackling ice and glaciers calving icebergs, and neutral po-faced promise that may be a two-edged sword of boundless mineral riches and dangerous radiation and methane buried under the permafrost that may threaten the entire world and with it the survival of humanity.

Maximum volume is needed to fully appreciate the sounds and wintry atmosphere of this recording. The room has to be very hushed as well and all lights off are advised so that your mind is fully concentrating on the details of this recording. Not a great deal happens to be honest. Track 2 is the most interesting piece here as it seems to be taking place underground and has the feel of a team of scientists descending a deep hidden cave, perhaps to find a famous underground freshwater lake … and encountering instead the horror of all horrors: the Thing That Should Not Be. (But if you want to know who or what I’m referring to, be my guest: just don’t say I didn’t warn you and I’ll let you know right away I’m not paying your psychiatrist’s bills if you get the heebie jeebies.) Music that appears can be very graceful and beautiful if doomy and sinister and may be well worth the price of going mad.

Track 3 is quite dense and forbidding in its sounds and haze of background ambient noise grit. Things that Go Bump In The Night, especially if you’ve lost your way in a labyrinth of tunnels in the mysterious underground ice-cave and have to camp in amongst suspicious-looking stalagmites that might have been planted by outer-space visitors a million years ago and are beginning to ooze icky white stuff, start their bump-n-grind routine and a resonant piano / harp melody slowly comes into long focus.

As a soundtrack to an imaginary film set in the high Arctic, “Novaya Zemlya” fits the bill well; it would even have done well as a soundtrack to parts of Ridley Scott’s recent sci-fi mish-mash “Prometheus”. As an environmental message calling attention to the archipelago’s potential to release an apocalyptic hazard in the form of radiation or methane gas that could afflict or even wipe out populations in Europe and parts of Asia and North America, it’s, well … it’s nowhere near as doomy, juggernaut-like, dangerous and frightening as it should be.