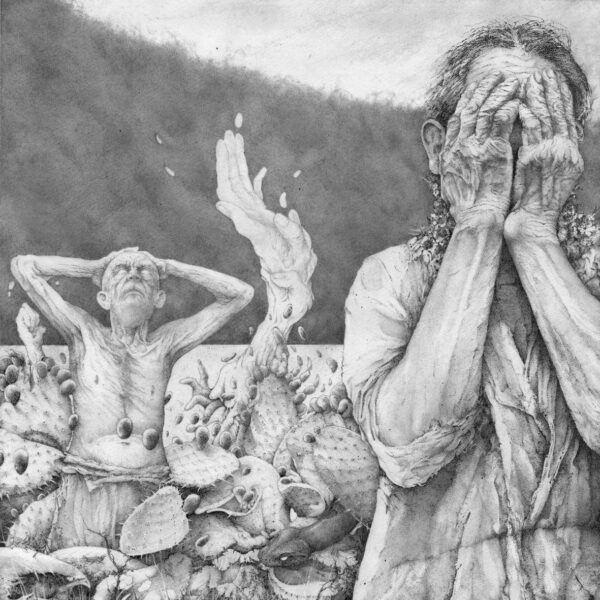 Another mighty missive from Deathspell Omega in the form of an EP and it’s a surprise in that the band is expanding its sonic range into something more atmospheric, doomy and emotional. Opening track “… I had a salowe vision” (sic) is a brief yet astonishing foray into intense and bleak apocalyptic post-rock of ringing chords and lots of dark, anguished space recognisable to fans of Caina and Godspeed You Black Emperor perhaps. “Fiery Serpents” explodes upon us in all its heavy, intricate yet melodic black metal fury: stop-start rhythms, nuclear-powered drumming, constantly twisting and turning arrangements, and occasional swanky passages of staccato riffing and drum rolls all overlaid by the familiar gnarly-snarly vocals. All tracks are very short and stop very abruptly and you wonder how the band manages to control its energy so well that each song is clear and distinct from the others yet managing to pack so much in the way of melody, rhythm and intense aggression into the space of about 3 – 4 minutes.

Already we’re halfway through the EP with “Sand”, a confident swaggering piece with an off-kilter counter-melody to the main tune played on sparkle-toned electric guitar. “Abrasive Swirling Murk” quickly pushes it aside with a complicated rhythm structure and more of those stuttering guitar riffs. This track builds down to a middling post-rock pace and (but for a brief pause) segues into “The cracked book of life” which unusually perhaps for DSO is a long instrumental piece of ambient post-rock groove with a trumpet loop surrounded by heavy guitar crunch and grind. A long mournful clean-toned guitar solo underlines the anguish of existence in which belief in a loving God is futile because God does not care about humanity and its misdeeds.

The recording may be very short (it’s only 20 minutes in total) but there is such a lot pressed into it that even DSO regulars must hear it a few times to register what the band has done. Parts of the album can be trippy and quirky in the way guitar chords and notes can sometimes appear off-key against the rest of the music. The musicians are delving much deeper into the territory of atmospheric post-rock and might be taking on an avantgarde jazz influence as well, all the while maintaining a firm grip on their black metal foundation with their fuzzy rhythm guitars. As usual, the DSO lyrics are very dense and quite a mouthful for the vocalist to chant through. I’m now accustomed to the idea of DSO releasing mini-albums instead of longer recordings: the mini-album format suits the band’s music very well. The musicians limit their exposure to their own stark and unwavering intensity or they might end up absorbing too much of the radiant energy that their instruments release.