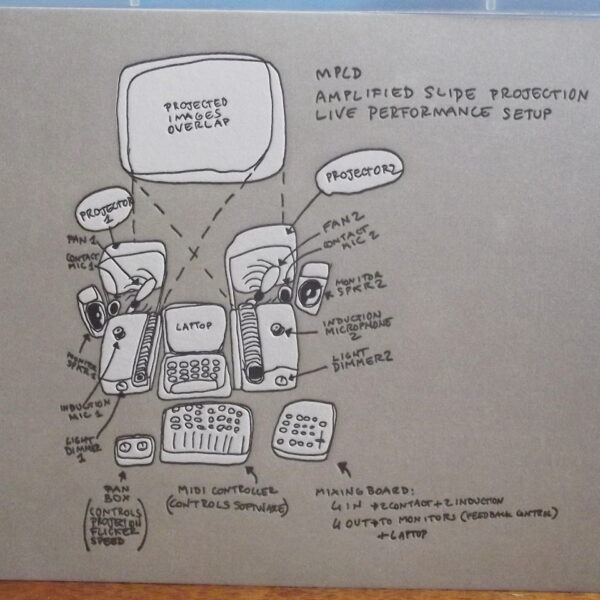 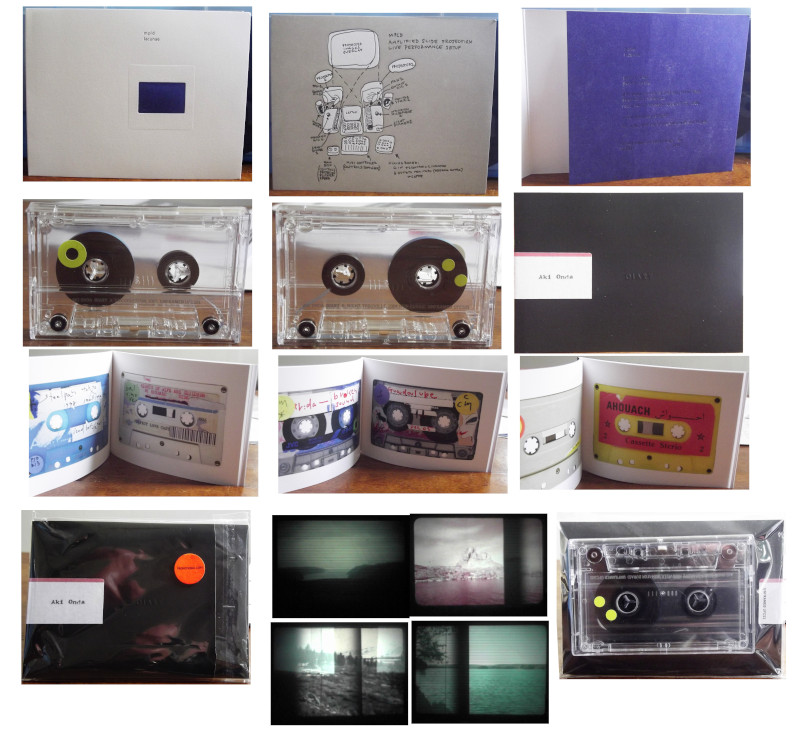 Here’s the final two items from the December 2011 Gill Arno package. We have Diary (UNFRAMED RECORDINGS UFCS1) by Aki Onda, the Japanese sound artist who lives in New York and is widely recognised as the Lord High Emperor of cassettes, due to his monumental collection of daily tape captures – he’s been doing it everywhere he goes with a cassette Walkman for over 20 years now, bringing in aural snapshots of his international travels to the point where he’s pretty much done for phonography what Andy Warhol did for camera-snapping. At a recent exhibition of Warhol (Headlines) I learned that he produced a phenomenal number, perhaps thousands, of documentary images with his obsessive Instamatic and Polaroid ways. The Diary item is perhaps more of note for its wonderful booklet, presented as a nifty limited artist book with its embossed cover and band around the spine. Flip the pages to scope the faboo images of labels from Onda’s tape mountain, some with colour dots applied referring to a private classification scheme, or with handwritten notes (even his calligraphy is charming), stick-on images, and remains of torn-off former labels. A mini art gallery in itself. Also there are three pages of notes by Onda about his practice, which he freely owns is “obsessive”. After a few years of building up this personal library of aural information, he began the process of inserting new recordings into his old tapes, overdubbing some sections and arriving at remarkable chance events which cause instant wig-out when played back. And for about ten years now, he’s been using the tapes in his live performances, where you imagine the devastating effects they would have on the average audience, being fed numerous batches of mixed signals and stratified, mismatched blankets of data. Aki Onda has become his own walking sampler with a databank and memory of prodigious size. Can’t say that the actual tape that comes with this release reflects any of the above delicious chaos, in case you were hoping to buy into a slice of that 1. Instead it is a C60’s worth of gentle field recordings, with side A possibly being the ocean and side B some more ambiguous nocturnal rumblings. Which isn’t to say it’s not a beautiful thing, the graininess of the recording process adding considerable enhancements.

Also from Gill we got a nice DVD of his mpld work. mpld represents an integrated performance work with a set-up of slide projectors, fans, and laptops, where the sounds of the fans and projectors are amplified and processed, and when enacted it becomes a time-based installation piece with images and sound (and even a sculptural dimension, according to the creator). Lacunae (WINDS MEASURE RECORDINGS 24) is for me at least the first chance I’ve had to get a more complete sense of what it all means (just listening to the audio from an mpld event is rather puzzling to say the least). Gill Arno had a video tape made some years ago, but it was really intended as a working document for his own purposes, so he could see what it’s like from the audience viewpoint. When asked by Ben Owen to release the videos on Winds Measure Recordings, he agreed to do it even though these blurry video tapes are not a perfect document of the real thing, But Arno decided he likes the imperfections, in much the same way that Marcel Duchamp was quite philosophical when The Large Glass 2 was accidentally shattered; after a lengthy and painstaking restoration, he grew to like the breaks and decided they added something to the image. Accordingly on Lacunae we have layers of grain, fuzziness, errant colour blotches, and a very severe flickering effect for our eyes to burrow through. The projected still images of landscapes, in themselves not especially artistic, are transformed unexpectedly into visual schemes of great richness and beauty. The projections are accompanied by a compelling and quite subdued chattering and rumbling sound, fed through gently varying filters, and the combined effect is a mysterious and haunting wonder. Evidently, even the most process-based works can still be highly productive and trigger imaginative and associative responses from an audience. Arno himself speaks of the processes of “obsolescence and decay” that are manifest on this release, and he indicates that “memory and loss” are the underlying themes to mpld; these video-based artefacts that have been introduced into the work now serve to deepen and enrich that meaning. The cover and postcard insert are the result of a collaborative printing session with Ben Owen (mixed inks, so that each individual print is colour shifted and unique) and the image shows the mpld setup as a compacted son et lumière arrangement that delivers simultaneous sound and image from a table top. The 40 minutes I spent watching this beautiful DVD will probably be the highlight of my day today!