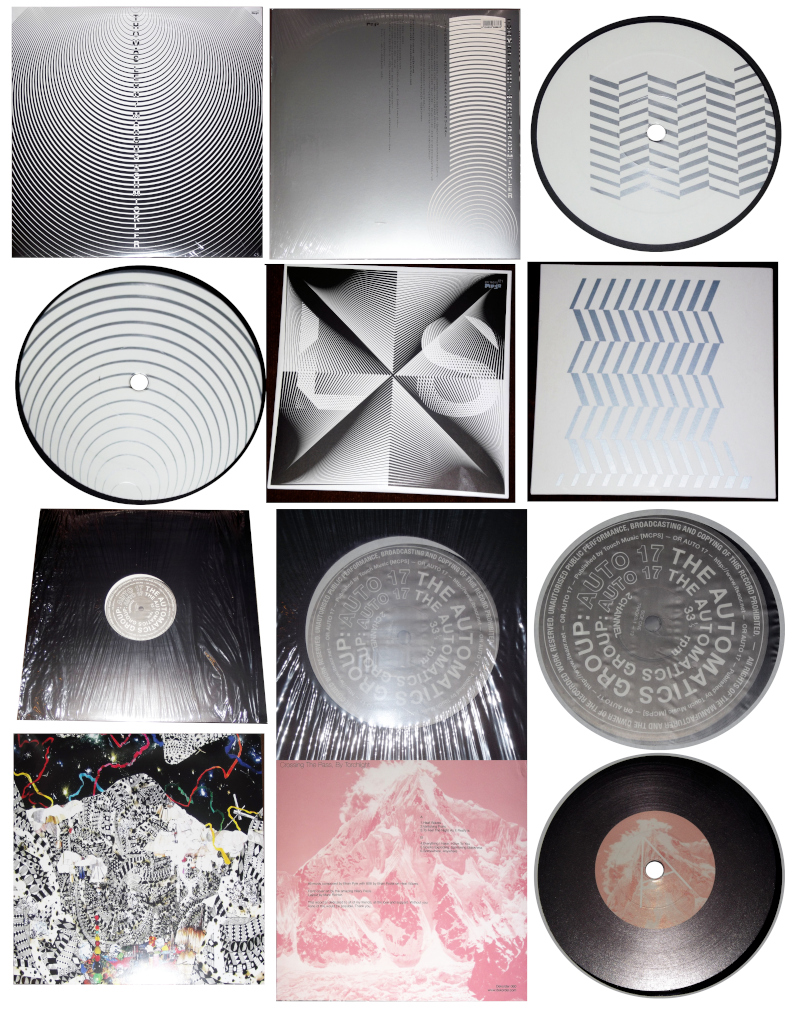 As I write the Editions Mego label are engaged on a programme of repackaged vinyl reissues of historical electronic music and Musique Concrète, including works by Bernard Parmegiani, Pierre Schaeffer, and Guy Reibel, dressed up in new sleeve art. I mention this in the context of a 2011 LP which I’ve finally gotten around to giving an airing. Live Double Séance [Antaa Kalojen Uida] (EDITIONS MEGO 121) is by the master analogue synthesist Thomas Lehn with computer work from Marcus Schmickler, and it’s a complete fucking bruiser. In this coupling, the pair of creators have been happily wreaking digital-analogue havoc across mainstream Europe for quite a few years; we very much enjoyed their 2008 record Kölner Kranz for A-Musik, which like the present record was full of energy, crackle and relentless forward movement; and the CD Navigation im Hypertext for the same label, which was not dissimilar but characterised by a much darker and sombre mood of introspective gloom. Live Double Séance combines the best of both of those energy streams; it’s about the most violent music I’ve heard for months. It can flatten you into the tarmac with its incredible, weighty and obnoxious noises, which can erupt as unexpectedly as a thermal nuclear attack. For sheer shock value alone, these moments put me momentarily in fear of my life and an imminent ceiling collapse. Even without these more extreme sensations, Live Double Séance bristles and sparks with staggering invention, keeping one foot in the classical schools of Germany and France (both creators tipping their Stetsons to Stockhausen, Leunig, Schaeffer and Varese) while pushing the envelopes into even wilder unexplored territories. It’s as though the experimental dream has come true and the “language” of 20th century electronic music has at last become the lingua franca, and in a far more meaningful way than can be measured by the sale of a thousand Macbooks with a thousand installations of Max-MSP. What makes the record triply impressive is that it was all improvised and recorded live, in a single take and with no overdubs. In the 1960s and 1970s of electro-acoustic music, men would have had to sweat gallons of blood to produce 60 seconds music of this raw power through the act of composition. Now here’s over 40 minutes of re-animating jolts. Proper amplification, the correct recording methods, and of course the sheer filthy talents of Lehn and Schmickler clearly go a long way to improving the situation. I’ve rarely heard electronic music presented with this much clarity and depth – it’s shockingly pornographic. Besides the compelling and unignorable vinyl blastage of wails, shrieks, barks, hoots and unnameable aural experiences, there be also a DVD rendition of same so that those of you with home cinema systems can create an indoor session of devastating assaultage that’ll have the social services and 15 ambulances calling round to your door in nothing flat. The proud boast of the label is that “all spatialization was part of the live performance”, so to experience that dimensional aspect alone it’s worth investing in the finest system Richer Sounds can push your way. Plus it’s suited up in a Stephen O’Malley op-art cover design that is just crying out to be exhibited alongside the “Silver Series” of Prospective 21e Siècle LPs from Philips. An essential LP whose weighty bold power is…considerable.

Now for some more electronics on Auto 17 from The Automatics Group. This short LP (OR AUTO 17) from the Touch Music sub-label was put together by Theo Burt and Peter Worth, using the VCS3 at York University. It’s a short little stubber, only about half of the vinyl is etched with grooves, and even they are quite widely spaced; somehow, there are 28 tracks squeezed on here and the dang thing lasts but half an hour. Loud and meaty electronic sounds burst forth, with only the most minimal of invention or composition in evidence; single finger one-note riffs, if that, appear to be the plan in operation here, with very basic variations in the sounds and filterings. At one level we might be dealing with a basic demonstration disc for the VCS3. Yet somehow these radically simplified statements creep under the skin, not in the way of a memorable melody or even as a memorable sound, but simply as something very fundamental. We might consider these tracks among the building blocks of electronic music, the cells that constitute its DNA, the phonemes of its speech. Even at the hour I write these lines, having spun the platter some nine hours before, a side of my filleted skeleton remains charred and stained by these brutalist emanations. The information on the label website tends to present this record purely as an experimental research process, and the recorded output could be read as a document of such research. One element that’s been taken into account is the age of the VCS3 itself, an “iconic” instrument in the history of vintage synthesizers, but one that’s now so old that “wear, tear and accumulations of oxide have exaggerated [the] instabilities” of the device. Time was when labels Touch and OR would make a real virtue out of these quasi-scientific type releases, so it’s encouraging to see a return to that form. Like the record above, Auto 17 is possessed of the dreadful clarity that makes one imagine that electronic music can somehow pass into a man’s body as surely a form of blood disease. Thankfully, it’s not as frightening or apocalyptic as the things Lehn does when he passes his blood-stained hands over an envelope filter.

A more refined example of what electronic music has become is available from Ensemble Economique with Crossing The Pass, By Torchlight (DEKORDER 060). Here are six keyboard-rich tunes put together by Brian Pyle from Starving Weirdos, with the help of Brian Foote on one track. Unlike the above, Ensemble Economique has no interest in raw and direct sounds, and the musician cultivates a smooth and burnished sound, replete with many beats, and multiple overdubbed levels. To Pyle’s credit, he encourages “narrative” interpretations of his music which is supposed to pass on a sense of cinematic grandeur, to which end he adds titles such as ‘Vanishing Point’ and ‘To feel the night as it really is’, and the mountainside photographed on the back cover is a visual cue also. Sadly I found it an unsatisfying listen; not enough melodic content, compositional development or dynamics to sustain my interest, and most of the music fits so neatly into the grids that it’s like listening to a paint-by-numbers picture. I found it ironic that despite the name Ensemble Economique, the idea of “economy” in execution never seems to have occurred to the creator of this over-baked music. Pyle may dream of creating memorable cinema music, but this feels like a latterday library record for use on TV documentaries. I wanted to like it, because I enjoy what little I have heard of Starving Weirdos; it would have been nice to hear a bit more of that band’s primal energy here. Outstanding cover drawing is by Hilary Pecis.