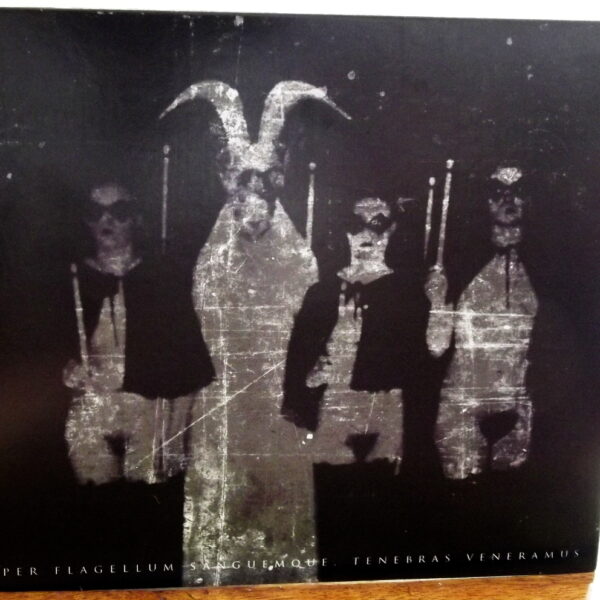 On this massive missive of extreme blackened orchestral noise terror, GTT man Mories has refined his approach so that it’s more atmospheric and relies less on shock-horror-awe theatrics and melodrama. Mories’s choice of target seems to be more specific: to me, judging from the song titles and the photographs, the object of his attacks is organised religion and the rituals associated with them, all treated in a highly perverse way. Just as in the mediæval past, people such as the Goliards in England, France, Italy and Germany in the 12th and 13th centuries, who were critical of the Roman Catholic Church and its rituals, satirised them by writing defamatory poetry and among other things developing and building up the idea of the Black Mass over time (although the Black Mass as understood in popular culture has its origins in 17th and 18th century literary French culture, no surprise here!), so here Mories might be aiming at the Christian priesthood in the churches of his native Netherlands by presenting them and their rituals as defiled by bodily fluids and excreta.

Throughout the recording, the orchestral music is cacophonous, doomy and often very frenzied with choirs of demon voices gone completely insane. Any violins that might appear go straight into the shrill, hysterical range of their capabilities. Trumpets and tubas blare loudly while the rest of the orchestra fight over which section gets second billing. Since most songs lack definite structure, melodies and riffs, they all tend to sound alike and so the entire album must be heard in its entirety with each song to be considered a movement within a whole work.

There are voice samples included in the work and these help give the impression that the album is intended as a soundtrack for an as yet unmade movie: perhaps Mories should team up as composer with fellow Dutch maniac Tom Six should the latter heed the call from heaven for a third installment in his Human Centipede movie series. Certainly as the album progresses, quieter passages of music with more conventional choral voices are introduced. Quiet though does not mean serene and several quiet passages turn out to be more creepy and malevolent than the full-on noisy and chaotic music.

The title track, coming as the finale, may be presumed to sum up everything that’s gone before it and while there is plenty of anguished screaming and howling going on and the music features plenty of bombast and field recordings of jangling chains and spoken voice snippets, it comes across more as just another episode in Mories’s evolving horror-film music soundtrack. This perhaps points up a weakness in this and other GTT albums I’ve heard so far: there’s not really that much dynamism in the music and for all the noisy chaos that I hear in it, the music in a sense is static and not at all progressive. When the quiet coda comes, it seems incidental to the rest of the album.