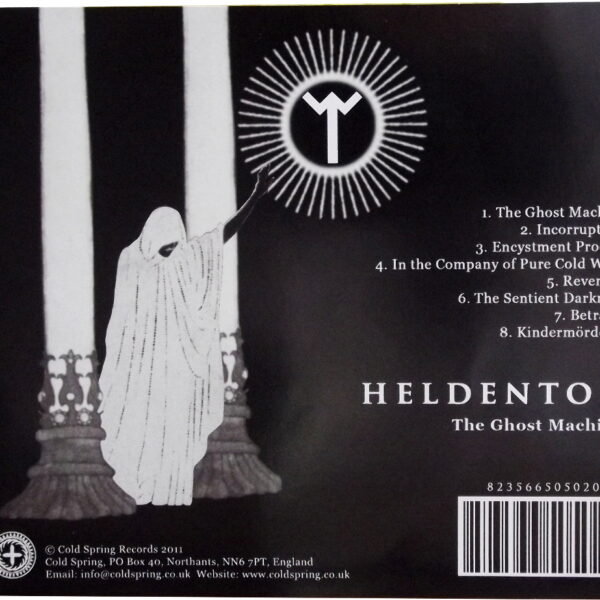 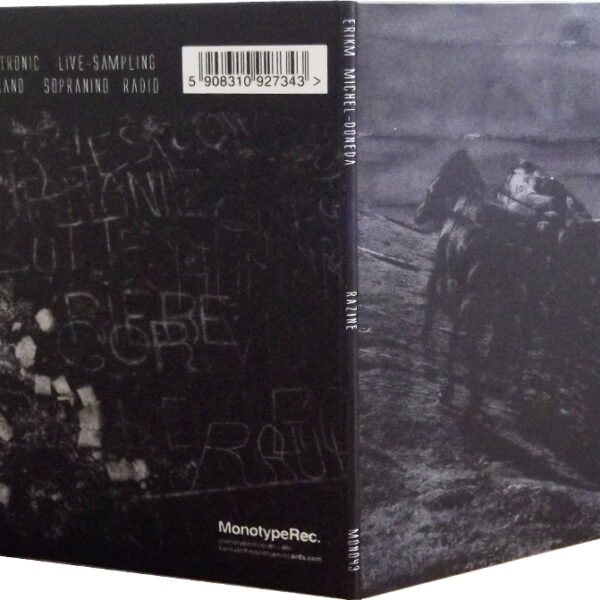 Good contemporary French improv on Razine (MONOTYPE RECORDS MONO43), a team-up between the saxophonist Michel Doneda and erikm, the turntabling live electronics fellow. We last heard these two working together on the Ronda release Dos D’Ânes, where Jérôme Noetinger added his vicious electronic outbursts to the mix. Doneda can be capable of slow and minimal squealing, but he’s much livelier on these improvisations from 2009. He works well with erikm and the collaboration delivers good results. His rhinoceros pelt is soon filled with breadcrumbs from the crazy antics of erkim, and the pair deliver crazy sqwawks and illogical whoops a-plenty, be it free-form atonal sucking and sputtering from the saxophones, or surprising chatterments and hurlements from the sampling-electronics half of the act. On the first track that errant craziness is tempered with long passages of growly rumble, effected by the familiar ploy of using scratches and crackle from old rotating vinyl, but the feathers are heavily ruffled for the second half of this 22-minute essay, with fireworks and roman candles fizzing into the cold night air. Continuous live playing here which never lets up and creates almost an airless effect, but not an unpleasant one at all. The second cut is even livelier. Doneda manipulates and twists his sound until he’s wringing painful sobs and sighs from the bell of his sax as surely as an old floor-cleaner at the hospital wrings his mop into his pail. Erikm brings in further stabs and swipes from his boodle-box of samples: drumbeats, fierce noise, voices, and unrecognisable fragments, doling them out in tiny portions to fill our ears with seconds of glorious madness. A very disciplined squonk+electronica fest which makes for a compelling listen. Fine moody monochrome jacket too. Gloomy power-electronics with sinister voices can be yours to enjoy on the new album by Hungarian band Heldentod, an entity that’s apparently been in existence since 2005 and may have produced one or two albums in the “dark folk” genre. On The Ghost Machine (COLD SPRING RECORDS CSR131CD) the cover beckons us in with images of hooded acolytes at a nameless ritual surmounted by a glowing rune, while on the disc there are eight tracks of abstract, dense and well-constructed drone-noise of an extremely sinister hue, each lasting around 5-6 minutes, but feeling more like an eternity of doom in each case. Keeping their sounds deliberately vague and shady, the better to populate these murky realms with shadowy figures, Heldentod varies the emotional pitch quite successfully across the album – ranging from the grisly & harrowing to the pessimistic & desolate, using brutal noise loops or dismal synth layers as needed. The album opens with a vocal recit spoken by Jill Lovinitnun, with its rather pretentious lyrics fed through an echo chamber, but luckily this turns out to be uncharacteristic of the remainder. Vocals do appear on some cuts, but the haunted satanic voice simply utters single words and allows technology to repeat them (as on ‘Incorruptible’); and the vocal element is just one more part of the heavy and occluded mix, buried and distorted to conceal its meaning and to increase the diabolical mood. The press release informs us that Heldentod have always expressed a number of key “themes” in their work, mostly to do with histories of the supernatural and the pagan, and continue to do so on The Ghost Machine. Although I found the near-histrionic pitch of this album a bit heavy going, I do enjoy its obsessive use of loops, patterns, and repeats, and it could prove to be the perfect company for an insomniac night in the middle of Winter. 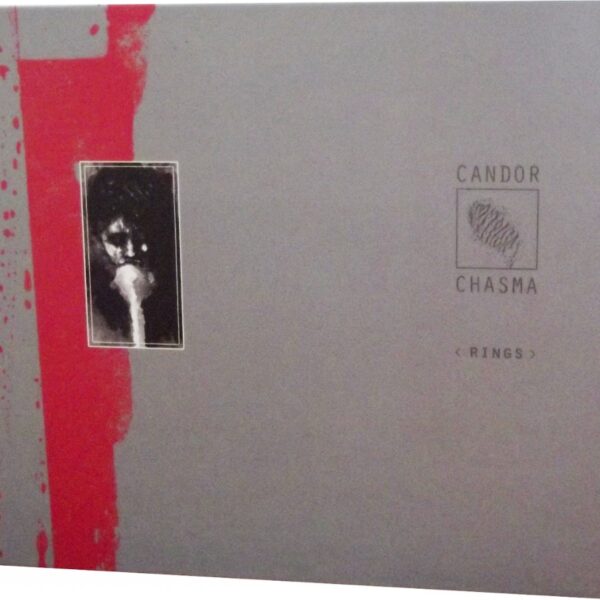 Oddly enough Heldentod might just find they share some common ground with Candor Chasma, whose new CD Rings (OLD EUROPA CAFE OECD 152) was produced by the duo of Corrado Altieri and Simon Balestrazzi. Admittedly, Rings is very much an “art” CD and more refined in its approach than The Ghost Machine, which admits to its predilections right from the start, but they overlap in their shared interest in the unknown outer worlds and spirit-infested zones that lie beyond the human plane. Candor Chasma speak of the ‘The Third Void’ and ‘Hallucination Doors’ with some apparent relish, undertake experiments such as ‘Chemical Analysis of Ectoplasm’, and presume that the most fruitful time and place for communing with the spirit world will be ‘Inside the Ether at 06.00 A.M.’ Accordingly, their thickened droney electronic music is exactly like a dose of chloroform for the listener, slowly inducing intense hypnotic states with its pulsating throbs. Through these grey mists of sound, eerie distorted and whispering voices swim. Each track emerges as the aural equivalent of a 19th century photograph taken at a séance, an image confirmed by the cover painting made by Daniele Serra. There is also the suggestion of using the tape recorder to capture ghost voices, in the well-known tradition of EVP. This album has its strongest material on the first two tracks which do come very close to inducing the hoped-for trance states, and the duo list all of their equipment (synths, filters, FX, mixing desks etc.) on the inside cover, as if to reaffirm their faith in factual and tangible objects after having dabbled with the ethereal and emerged rather shaken from the experience. The last track ‘Apophenia’ may be intended as the keynote track. Well, it is certainly very long, but it’s also a bit aimless and feels rather thin and washed out after the intensity of the earlier tracks. Even so there is still plenty of ectoplasmic detritus to be scooped from its swirling interior by the questing ghost hunter. Ironically, apophenia is the scientific term for a phenomenon of human perception that can be used to explain away much of what we regard as paranormal activity. For more supernatural music with similar undercurrents, you may care to investigate Balestrazzi’s Magick With Tears label. 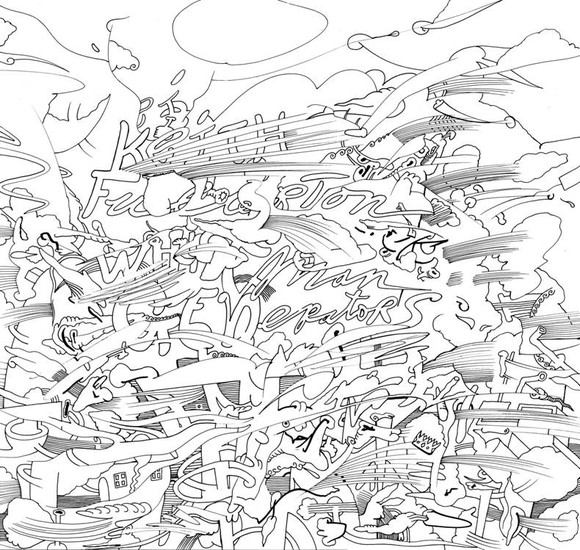 The above records clearly have an interest in using electronic music to help their creators tell stories or weave elaborate musical fictions. On Generators (EDITIONS MEGO DEMEGO 024), we hear Keith Fullerton Whitman approaching electronic music production more from the basis of an interest in pure sound for its own sake. On the first of these two pieces, both lasting precisely 17 minutes and 34 seconds, he performed at a festival in honour of Eliane Radigue. Radigue is a French composer whose use of sine wave tones and minimalistic electronic drones is truly monumental, but even she is not interested in process for the sake of it, and much of her work is underpinned by a firm belief in transcendence and the passage of the soul. Whitman’s ‘Issue Generator (for Eliane Radigue)’ may not aspire to the same degree of spiritual grandeur, but it is an extremely accomplished and satisfying piece of music. Starting with simple elements, it builds logically and perfectly into something complex and rich and as three-dimensionally precise as a sculpture made out of laser beams. Gorgeous. The second piece ‘High Zero Generator’ was performed at the Baltimore High Zero festival, and is quite different. Where the first piece arrived at a species of melody through process-based methods, this one is more abstract and harder to fathom. Alien sounds spit out of the dark centre almost erratically, one voice crackling and fizzing like a malfunctioning electrode, while other voices sigh profoundly or shriek like swooping bats. Like the recent vinyl masterpiece from Lehn and Schmickler, this piece somehow recaptures the terror and strangeness of early electronic music from the mid 20th century, and reinjects it directly into the culture of 2012. I’m astonished to learn that these are two manifestations of the exact same performance piece, which was executed several dozen times over the course of a year’s touring by Whitman; the two versions on this LP were selected as being among the best examples of its realisation. From what I understand of the process developed by the composer, it represents something of a creative breakthrough in the use of digital and analogue computer-based tone generator systems in the context of live performance. Personally I would like to think it represents the beginnings of a backlash against music made with laptop computers. Musically and creatively, this is an innovative record that deserves your attention. Graham Lambkin drew the cover art.