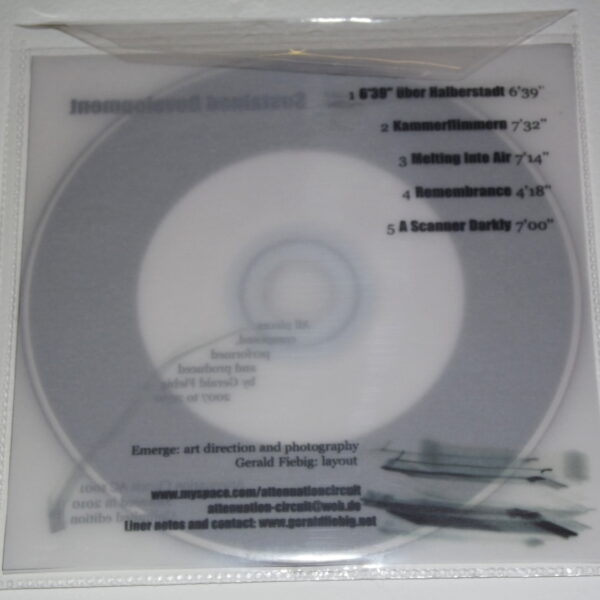 This is the last item to be heard in the January package from the German label Attenuation Circuit. Sustained Development is Gerald Fiebig, and Sustained Development (AC 1001) is a collection of his drone experiments. He executed them by combining recordings of musical instruments, mostly droning organs and harmoniums, with field recordings; and there is digital editing going on to extend and “time-stretch” certain elements in his overall scheme. Fiebig admits his personal debt to John Cage and to Phill Niblock, the latter being the NY master of carefully prepared overdubs to produce a multi-layered and extremely intense playback experience that depends heavily on good speakers. Sustained Development may not have the magisterial single-mindedness of Niblock, nor does he opt for the extreme duration oft-times associated with La Monte Young and others. In fact most of his pieces are no longer than eight minutes. But he does possess an intriguing way of varying his drones by following a simple curve path that exponentially increases the density, rate and pitch of the sound, so that by the time us listeners reach minute #7, we’re usually gasping for air. ‘Kammerflimmern’ and ‘Nothing Into Air’ both seem to follow this path, and are characterised by an almost claustrophobic artificialness in their construction; the heavy drones just seem to dominate everything in the field of play, until they crowd out all the available space. ‘A Scanner Darkly’ is not as relentless as that, and like the first track it makes more use of external field recordings. Somehow this tactic helps to open up the imaginary space; it’s something to do with the relief of hearing heavy iron machinery alongside inhuman droning keyboard devices. Even so, these cuts are no less relentless in their pre-planned strategy. This record may seem unassuming if you glance at it, but I sense its experiments are thoughtful and repeatable, and that it’s a little gem of compacted minimal droneism. It’s also endorsed, more or less, by Hartmut Geerken, no less a man.

From 13 February, we took in another delivery from the Swansea micro-label Quiet World, run by Ian “Mr Serenity” Holloway, who must be one of the few people who still uses sealing wax to seal up his envelopes. Like Sustained Development, he too has been known to use reworked field recordings with electronic drones, to cultivate his gentle hymns of praise to the English environment. However Simple Ghosts & Lazy Old Bones (QUIET WORLD TWENTY TWO) is, in some regards, more like conventional music. Holloway is joined by Rhodri Thomas and Stephen Jones, and the trio play guitars, percussion, melodica, electronic instruments and so forth, their languid instrumentals occasionally supplemented by samples and recordings from the countryside. String instrument playing (guitar or ukulele) may appear to be the dominant musical component, but don’t expect to hear the prowess of a John Fahey or Robbie Basho in these grooves. The finger-picking and melodic strums, particularly as played by Rhodri with his “Welsh guitar”, is pleasant and listenable but also kept deliberately unobtrusive, understated. On ‘Licking Pennies off a Wall’, for example, the music is almost an adjunct to the low-key and mysterious samples of Holloway, and our listening interest derives not from any appreciation of musicianly guitar-playing skill, but from the rich combination of the sounds. This is the case even when the combination doesn’t appear to have been especially pre-planned to allow for happy coincidences; it’s like the artless superimposition of two unrelated pieces of 8mm film, to create a new movie experience. If some of this strikes you as a little twee or new-agey, you might fare better with ‘I Am An Owl’, which is a Holloway solo track produced from overdubbing percussion tracks (kalimba and rain stick) with the sound of a “singing gate”, which hopefully is the result of making a sawing or bowing motion against the railings of a gigantic cast iron gate from the Victorian period. I know for a fact Jonathan Coleclough once did this, and the world has never been the same since he bowed that gate. 1 This Owl track of Holloway’s is still pretty “musical”, but it remains rooted in a very basic tonal range as it drones, sighs and rattles in nocturnal fashion; at fourteen minutes in length, it is the longest piece here, and the most magical. One can almost imagine its constant repetitions being deployed by Holloway with the intuitive and studied patience of a Welsh druid, effecting the transformation of man into bird. Also of note is ‘Stumble Slightly Lower’, where the guitar playing is undercut by wobbly theremin wails and the fuzz of a sine wave generator. Less than three minutes, but it’s somehow perfect in its hermetically sealed oddness. I’d have willingly paid entry price for a whole CDR of this sort of content. The three players here are old friends and collaborators on other projects, and the record assembled itself over a period of many years. That warmth and compassion transfers well onto the disc. Long live these simple ghosts.

Now here are two of Barcelona’s most extreme improvisers, good old Alfredo Costa Monteiro and Ruth Barberán, who have often played as a trio with Ferran Fages. This one is by another collaborative team-up of theirs called I Treni Inerti, which used to include Matt Davis, and now it doesn’t, so it’s just a duo. Luz Azul (FLEXION RECORDS FLEX_002) is a single 48-minute piece called ‘Ser Res’, probably performed in real time, and though compelling and riveting, it’s also quite a testing experience to listen to. Monteiro has his slow and wheezy accordion, Barberán has her trumpet from which she contrives to extract long and spindly alien tones, and they both rattle unnamed objects about. They’re moving slowly and perplexingly, and the musical language they speak is tough to follow. What’s going on? Well, it was recorded at an unearthly hour of the night at a deserted railway station. The duo positioned themselves at this station at three in the morning, playing for two hours, and making the most of the situation. The added aural dimension to the performance comes from the passing freight trains, whose passage both interrupts the flow of the music but is also made to accompany it in some way. The silent parts in between the arrival of the late freight trains are filled with anticipation and tension, and do somehow add traces of drama to the music. It also makes it feel incredibly remote and lonely, although Sant Vicenç de Calders may actually be an extremely lively junction for aught I know. I have no idea what brought the two musicians there, unless…maybe they deliberately sought it out as an inhospitable zone, an arena not normally considered conducive to music production, or even somewhere they could perform in secret, far from the prying ears of an audience. All of this indicates an artistic strategy on their part to lift their carcasses out of the comfort zone, concentrate on doing nothing but making the music with zero distractions, and most of all doing it for themselves – without the obligation to consider anything about “entertainment” value. These are all pure and idealistic notions about art which I can respect. After all, Charlie Parker and his men used to go to New York clubs at four in the morning specifically so they could “play for themselves” with no paying customers getting in the way of the art. And I have noted before how the English group Unseen have, collectively, done very similar things and produced great music thereby. In its hermetic way, the experience has probably helped our two Spaniards define the very severe aesthetic of I Treni Inerti. They state they are aiming for music with no “ornamentation”, making use of silence, striking a balance between the audible and inaudible, and establishing an aural zone where their own private interior worlds can grow. Limited edition of 120 copies, and like the first release on this label, is packaged in a sandpaper cover. And even if that sandpaper trope is getting a bit stale now, at least the music is good!