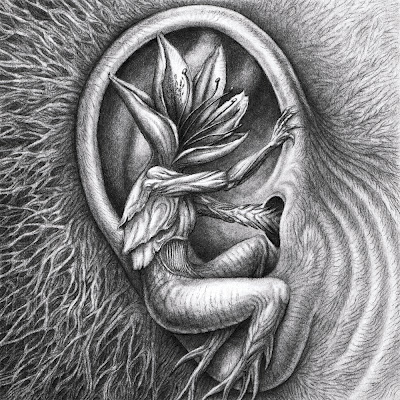 After the first two albums, reviewed in an earlier post, the one-man eco-black metal dulcimer-playing horde The Botanist opts for a rather different musical direction on “Doom in Bloom” which as the title suggests is a doomy affair. Those first two albums were quite breezy and minimal in style and featured 40 short songs crammed onto two discs: the danger there was that they tended to bleed into one another and to lose their individuality as songs. No such problem here: the album proper runs over an hour in length but features just seven songs, all of which take up the nature-oriented theme with their titles describing the characteristics (as The Botanist imagines them) of various plants and fungi such as the lingzhi mushroom, the poisonous Amanita mushroom, the holy basil and ginseng.

Tracks are usually repetitive and slow, and their riffs and melodies make more of an impression on listeners than their equivalents did on The Botanist’s first two releases. The sound can be mournful and plaintive and the drumming sounds more natural (in the sense that it sounds as if Otrebor, the Botanist main-man, had actually got someone on skins: that would be himself, I believe) and confident, even martial, and less brittle and nervy. Extra instrumentation and some subtle effects have been included on some tracks as well. Vocals, when they do appear which is not often, tend to be whispered and unobtrusive, and even when the phantom gravel-rasp appears, it is very quiet. The screaming veers more towards existential anguish than to hostility and aggression. The most distinctive track on the album is “Deathcap” which has a slumped, depressed mood and a foot-dragging pace; apart from this track, the other songs tend to be fairly generic and downright ploddingly mediocre and quite painful at times.

Fortunately The Botanist has included a bonus disc titled “Allies” for which six bands were invited to contribute tracks based on the rhythms of the “Doom in Bloom” songs and that also have a nature or plant-based theme. Matrushka’s “The Ejaculate on the Petals of the Femme Orchid” pieces are wafting ambient pieces, mysterious and lonesome in their mood. “The War of All Against All” by Cult of Linnaeus is a brooding raspy-voiced song with death metal, post-rock and sludge doom metal influences. The Botanist’s regular band Ophidian Forest plays folk-influenced, near-symphonic black metal on “Cordyceps”, referring to a type of fungus: this is a stirring piece with a thrumming rhythm loop and in parts possesses majesty. Arborist’s “Total Entarchy” is a weeping piece performed on metal-stringed or slide guitar with piano and drum accompaniment that suddenly and dramatically breaks out into full-on emotional post-rock psychedelia with a spooky banshee theremin and sliding, melting guitar riffs and flourishes: this is easily the best song on the album and worth the purchase price alone.

Lotus Thief has its work cut out following Arborist but “Nymphaea Carulea” is an excellent post-rock black metal fusion piece combining a rapid rhythm, a raw guitar sound, smooth lead guitar drones and shoegaze shimmer that recalls aspects of Caina and Alcest. Unexpected toughness and crunch coming hard on the softer melodic passages make this a highlight on the disc. Bestiary’s “It Lives Again” is an ordinary doom metal song with lyrics sung by an operatic soprano singer.

“Doom in Bloom” by itself isn’t a great piece of work and I’m rather disappointed that it turned out the way it did. Doom metal doesn’t appear to be The Botanist’s strong point at all. The “remix” disc saves the album with those tracks from Arborist and Lotus Thief which together would make a handy split single.