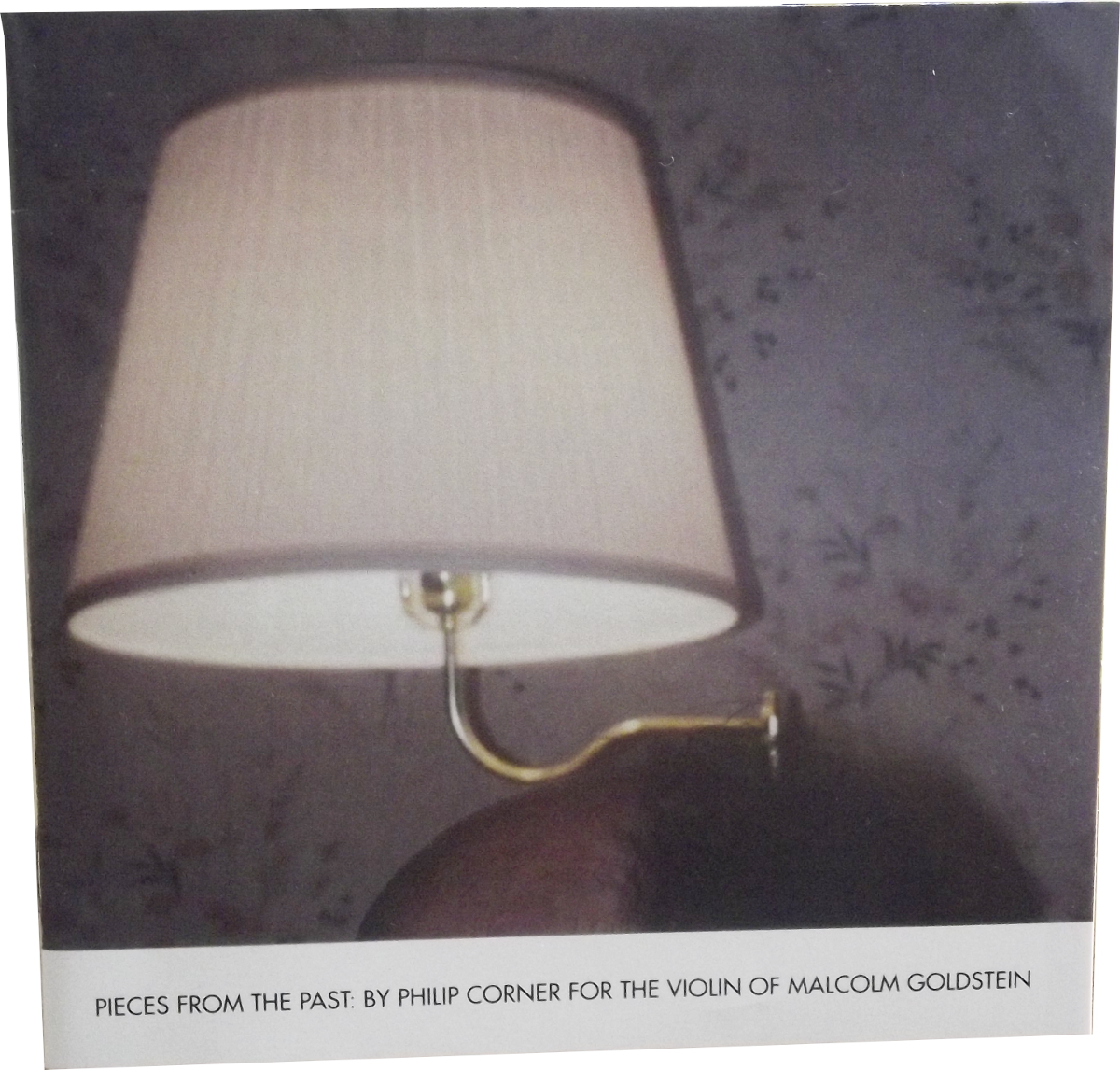 I Lift My Lamp Beside the Goldstein Door

Malcolm Goldstein is the American violinist who’s beyond being merely “maverick” and has stretched bodily into the realms of unclassifiable and even somewhat eccentric music. More evidence of his love of very open-ended compositional schema can be found on Pieces From The Past: By Philip Corner for the Violin Of Malcolm Goldstein (POGUS PRODUCTIONS POGUS 21058-2), which is almost all solo violin music, and all but one of the tracks are of almost “bootleg” status – that is, they are live recordings not intended for publication, and exhibit some of the minor flaws that give recording engineers toothache of the ears. For the rest of us, they are perfectly delightful pieces that allow the full range of sonorities from this venerable stringed instrument to shine forth like a creakly old leather sunbeam. The CD also showcases his long-standing association with the composer Philip Corner, with whom Goldstein has worked since the early 1960s. Corner is another impossible-to-pigeonhole American composer, and while I have a passing familiarity with his gamelan-inspired compositions thanks to some Alga Marghen reissue CDs, this collection shows further dimensions to his unflagging energy. Broadly, the five pieces here show Corner’s fluency with non-conventional musical notation – graphical scores, verbal scores, and notation presented in a very non-linear manner. These are the kinds of approaches which Goldstein finds liberating, as they allow him to interpret freely and give him plenty of space for improvisation.

One relevant example is the 21-minute piece which opens the disc, called ‘Philip Corner’s Piece for Malcolm Goldstein by Elizabeth Munro’, from 1962. In his enthused and idiosyncratic sleeve notes, Corner waxes lyrical about the possibilities of using calligraphy to create graphic scores, recalling how he had first learned the craft in the late 1950s from a Korean. He delegated the task of preparing the score in this instance to Ms Munro, and apparently what resulted was a long string of adding-machine paper which could trail all the way around the walls of a concert hall. Small sections of it are reproduced in the booklet, and this is what we hear Goldstein interpreting with his tireless waves of atonal glissandi, scrapes, and delicate flutterings of innovative bowing. Having presented us with this possibility of a Kerouac-styled graphic score that’s as freewheeling as the single roll of paper on which On The Road was typed, Corner proceeds to speculate that maybe it’s not even needed in notated form, and that another musician could carry on the torch of creativity by listening to this Goldstein recording and using it much as a typist takes dictation from a dictaphone. Also here: two compositions from the 1980s, one short one from 1958, and a 1983 piece called ‘Gamelan Antipode/s’ which is mixed with a 1958 composition for string instrument. Not an easy listen; Goldstein’s very extreme technique on the violin here will prove testing for some listeners, but it’s the sort of music that requires a man of Goldstein’s presence and charisma to execute. And his untiring energy too. He just seems to keep inventing and innovating every second he draws breath.

Another item overlooked for a shade too long is this double CD compilation of work by the excellent Lionel Marchetti. I can’t think of a single release where he’s let us down or ever short-changed the listener. All of his electro-acoustic compositions are significant updates on the musique concrète model, and he always displays strong imagination in his semi-narrative suites, while paying close attention to the tiniest of details. Even if his work sometimes borders on the mystical, and risks alienating the audience through its pretensions, Marchetti always continues with bold footsteps into virtual worlds rarely traced by others. On Un Saison (MONOTYPE RECORDS MONO036) we hear four pieces, all of which have been previously released elsewhere, but compiled together here with suitable alpine imagery on the cover photos, as there seems to be a conceptual unity among the titles if not the actual underlying themes of the compositions. For futher elucidation, I refer you to the sleeve note in the booklet by Michal Chion; he warns us not to think of them as “sonic landscapes”, but does admit that the “similarity of the titles…might intimate a certain landscape quality”.

On CD 1, ‘La Grande Vallée’ is a vivid assemblage of field recordings from the wilder side of nature, including howling wolves and other animal cries; the treated sounds are mingled with the voice of Hélène Bettencourt, and pre-composed clarinet music. Bettencourt may not say much, but when she does you could use her voice as an ice pick or piton. More than most who work in the phonographic area, Marchetti edits and assembles his field recordings in exciting fashion, to create a sort of “magical realist” portrait of nature, and to tell half-glimpsed stories. No wonder this was originally issued in the Cinéma Pour L’Oreille series; Marchetti would have made a great sound recordist for avant-garde cinema.

‘Portrait D’Un Glacier’ contains some field recordings captured at Mont Blanc with the help of Bruno Roche; this alpine work also uses plenty of electronic music and analogue synthesisers in the composition, and the final work achieves a seamless blend of all the materials. Highly ambient and mysterious (Brian Eno meets Messiaen), full of the baffling near-silences which Marchetti delights in, with punctuation provided by water splashes, shouts of men in the mountains, and a general sense that somehow the sweeping scale of mountain ranges has been successfully rendered in small and intimate sounds. Subtle, understated; yet compelling listening, and importantly it’s a zone still populated by human beings. One need only think of how F. López tends to approach the same subject matter; his soundscapes are generally unblemished by any sort of human presence, preferring the emptied-out beauty of nature’s sound by itself. This 1998-2000 composition originally appeared on Ground Fault Recordings.

On CD 2, ‘Dans La Montagne (Ki Ken Taï)’ has already been heard and reviewed by us in its reissue from Chloe Recordings in 2003, although it was composed in 1995-96 and first appeared on La Muse En Circuit. Again, it’s a rich mix of field recordings with electronic music, supplemented by performing voices and the voices of the Kendo teams whooping and shrieking and clacking weapons together as they enact their martial sport. The “mountain” theme here in the title always leads me to believe we’re hearing climbers swinging on ropes and coming to a terrible end, but it’s nothing of the sort. Leaping out vividly from the synthesised gloom and deep sombre tones, these uncanny yelps make this one of the most memorable and striking pieces on the set.

‘L’Oeil retourné’ has also been heard and reviewed by us when released on Selektion in 1999. It also involves some mountainside walking with Bruno Roche, and contains quotations from other records in amongst the gently fizzing and gliding electronic sounds – including Ralf Wehowsky (who was originally on the split CD), This Heat, Jospehine Leask, and others. Random radio station noise plays a part in this brittle and minimal music, as does the crisp voice of Hélène Bettencourt. It exhibits the “quiet and inscrutable” side of Marchetti; the listener has to play close attention to catch every nuanced detail of sound, as some of these events are so fleeting and near-imperceptible.

In all of this music, Marchetti presents a portrait of nature as something somewhat dangerous and frightening; it has a scale that defeats us; it seems to embody forces that cannot be fully known or understood. Through his intensive phonographic studies and compositional reworkings, Marchetti does not propose to diminish any of that power, but rather foreground it and heighten it with his subtle and ingenious art. In so doing, he manages to stir primal forces in the listener.