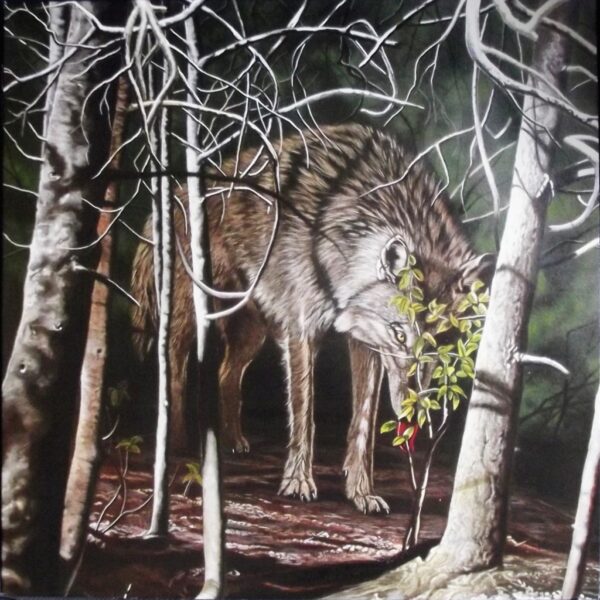 Brutal and sinister creep-noise from Daniel Menche and Anla Courtis on their Yaguá Ovy (MIE MUSIC #007) LP. It’s two side-long pieces which combine their respective methodologies, Courtis going down the path of “let’s keep exploring and repeating this one thing, and see how far we can take it”, with Menche thinking of how he can apply his themes of manifest destiny and self-determination through layered studio noise. Both of them use percussion created from non-musical objects, be it Anla with his old Pizza tins, or Menche making noise with snow and rocks, and thus continuing his explorations into the use of the natural world to make his darkened noise-melds 1. Used to be, he was all about overdubbed percussion and was not afraid to be dubbed the “mad drummer” of the Western states. There is some guitar on the record from Anla, but I’ve seen what he calls a guitar and I’ve seen how he plays it, so that credit line may not indicate what you’d normally expect. Mostly the record seems to me to be about overdubbing and processing, and using a lot of studio reverb to bring the inert sounds around to some kind of half-pulsating sickly artificial life. On ‘El Relincho’, the process follows the path of ever-increasing intensity, arriving at near-insufferable sounds that rattle, crunch and grind in ways that can actually cause physical and mental pain to the listener. ‘Runa-Uturunco’ is relatively easier to endure, but still has the feeling of rather disconnected piles of rubble strewn about on the ground where we might expect a house to be standing. The fierce atmosphere of the B-side passes on the hoped-for sense of danger and imminent mauling suggested by the nocturnal wolf painting (by Eric Stotik) on the cover, and even allows for sounds resembling musical notes. But I think the latter effect is just a by-product of the reverb and echo. A grim listen. 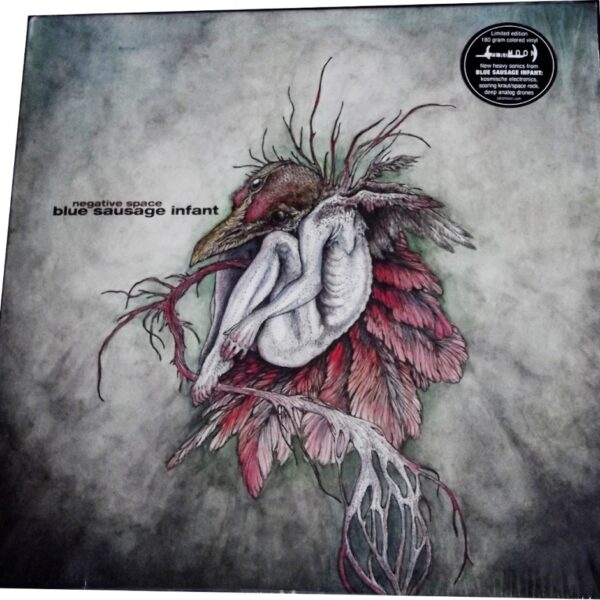 Blue Sausage Infant is no stranger to sinister music either, but he also favours a more rounded and generous approach to the production of his electronic music. Unlike the raw and uncompromising brutality of Yaguá Ovy, BSI’s LP Negative Space (ZEROMOON ZERO013) is rich and melodic, with no space left unfilled with musical and sonic detail by its chief creator Chester Hawkins. There are only three tracks on the whole album, and could be accurately summarised by the terms found on the front cover sticker – “kosmische electronics, soaring kraut/space rock, and deep analog drones”. There’s more to it, of course. ‘Motion Parallax’ occupies all of side one, and on one level is indeed an inspired re-weaving of the “kosmische electronics” of, say, Tangerine Dream. Blue Sausage Infant restricts himself to one basic keyboard figure repeated almost like a locked-groove, but fed through variations, filters and other ingenious dynamics. A vocal element appears at the beginning and in the middle, a lost voice neither singing nor speaking its incomprehensible lament. This track paints a desolate picture, but not as outright bleak as any given industrial synth music cassette release from the 1980s, and the dense fabric is enriched by Hawkins with his overdubs, his sumptuous keyboard sounds, the lush production, and careful attention to the details of timing and dynamics. If all this rubs your fur in the right way, then all you hip kitty-kats need to investigate BSI’s back catalogue; ‘Motion Parallax’ feels like a more “epic” version of the kind of material he has previously felt compelled to compress into six or eight-minute tracks. You’ll also enjoy the final track ‘Subferal’ on side two, a smothering menace-drone that is like a powerful dose of knockout-juice that intoxicates the victim as it sends him into a week-long sleep.

The title track is different again. Chester is joined by a band – drummer Michael Shanahan, guitarist Jeff Barsky and Jason Mullinax, who supplies additional percussion-electronics. Together they turn in an exemplary rendition of “soaring kraut/space rock”, where the Neu!, Can and La Dusseldorf references are freely owned and milked for maximum enjoyment factor. But even here BSI cannot help but darken and occlude the overall tone; if the track is a space-rocket joyously flying towards a New Eden styled planet, Hawkins is the renegade captain who constantly veers the ship off-course in the direction of a black hole, meteor shower, or other outer-space disaster. The track bristles with live-band energy, the drummer in particular really blasting out. I personally enjoy the claustrophobic vibe we get from a lot of BSI’s studio-bound work – it’s as though the layers of overdubbing had sealed the music in a plastic container – but this track has a vital feel, like a whoosh of fresh air entering the room. If the Zeromoon conglomerate ever went bust, this quartet could have a grand future ahead of them turning in topnotch retro 70s prog-kraut music for the Sulatron label, if they were so inclined. To my chagrin I must admit I’ve had this one in the rack since July 2011 (it arrived just a tad too late for inclusion in TSP20). Chester writes that he “decided to go all-out for this with the vinyl + packaging and such…with luck, the audio is worthy of such fetish-worship etc!”. He’s not kidding. It’s the first-ever vinyl production for the Zeromoon label, and it’s a treat. Full-colour cover, printed inner sleeve, poster insert and mottled vinyl pressing, the transparent disk clouded up with streaks of black, perhaps what we would see if we could snap an X-Ray image of the creator’s misanthropic brain. Caitlin Hackett drew the cover illustration – Max Ernst drawn in the style of Arthur Rackham, with colours apparently supplied by a consumptive Victorian child in conditions of extreme air pollution. Matter of fact, if we could open the hatch to see the pilot of this particular craft from Budgie’s Squawk LP, the chances are he would look like this winged creature. Excellent item!