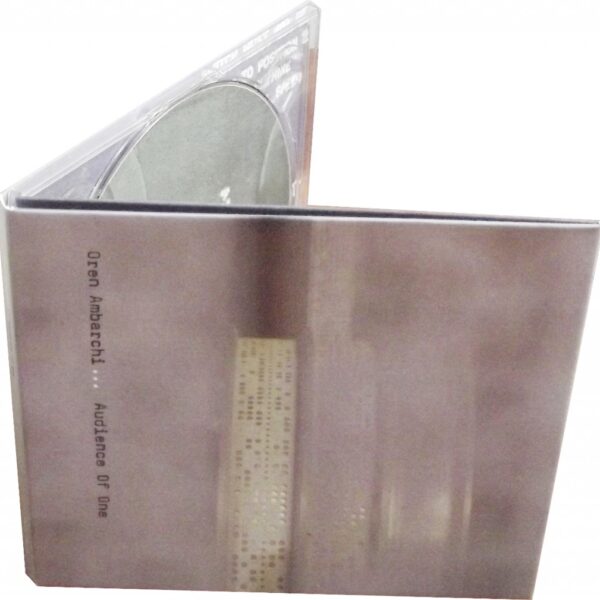 So what has good old Oren Ambarchi been up to the last coupla years? We don’t seem to have reviewed any of his records since TSP 18. The more we heard from this seriously talented Australian musician, the more facets appeared…a guitar-player of highly avant-melodic dimensions, he evolved and crafted an incredible personal style and distinctive sound on his instrument which to this day no-one else understands how to achieve. He also continued to amass an enormous collection of extreme Black Metal records during the years when that genre was hot, just because he loved the stuff; and also found time to pursue pop music in his band Sun, tour with Sunn O))), and appear in various doom metal projects such as Gravetemple and the Burial Chamber Trio. Not to mention appearing alongside improvising guitar veteran Keith Rowe as a member of 4G. Talk about your hardest-working man in showbiz…

Now we have his new record Audience Of One (TOUCH TO:83) which we received 17 February 2012. It’s a pretty unclassifiable album. I suppose the first thing to say is that it’s very beautiful music, and that it’s also rather lonely and sad in its fragile beauty. Through slowness, stillness, economy of means and other refining tactics, Oren has composed and directed four pieces of exceptionally poignant contemporary music. Did I forget to mention it’s also a collaborative work? Oren plays guitars, percussion, and keyboards, while important guest players provide strings, horns, piano, and percussion. On one of the most limpid cuts, ‘Passage’, there’s the splendid Eyvind Kang adding viola and piano to the mournful elegiac music. Kang is making good with his “spectral” compositions for Ideologic Organ just now. There’s also the delicate voice of Jessika Kenney on ‘Passage’, barely appearing, and moving through the track like an imperceptible breeze, barely leaving a stain on the tape. crys cole is doing something equally nuanced with her brushes and contact mics, while Oren builds his transparent layers of sound with guitars, Hammond organ and wineglasses (the glass harmonica I assume). After some six minutes of still waters running deep, ‘Passage’ segues into ‘Fractured Mirror’, the eight-minute epic that closes the album and represents another side of the pop and rock music loving Oren…for starters, it’s based on a tune by the Kiss lead guitarist, Ace Frehley [1. In my book, Oren scores 500 points for even name-checking Kiss, but he goes one better and records a cover version of a song by one of the band’s naffest members!]. Oren plays virtually everything, apart from some acoustic guitar assist from Natasha Rose, and it’s a tightly-structured instrumental of minimal Krautrock, the guitar sound of Daniel Fichelscher set to an early 1980s drum machine click track, with a murmuring mellotron drone at the bottom. Of all the music here this is the one track that wants to try and rejoice, even in the face of great sadness; it’s a glorious bittersweet melange of emotion.

The album begins however, not on a triumphant note at all, but with the slow sadness of ‘Salt’, a lugubrious song with pained vocals supplied by Paul Duncan from Warm Ghosts, plus a small string section (violin by Elizabeth Welsh, James Rushford on viola and piano) creating a romantic swell that’ll make your heart burst with empathy. Against this, Oren adds his treated guitar to sound like the unobtrusive ambient piano of Brian Eno, and also etches in his tiny details of discordant notes that add just the right degree of ambiguity to this hymn of uncertainty. This is probably what Scott Walker die-hard fans imagine they are hearing on disastrous records like The Drift, but when it comes to creating disturbing easy-listening styled modern pop ballads, Oren shows us how it’s done, almost effortlessly.

The main event of the album though has to be ‘Knots’, and at 33 minutes this track could have made a credible vinyl release on its own terms. The lineup here includes Eyvind Kang again, plus the cellist Janei Leppin, Josiah Boothby on French Horn, the percussionist Joe Talia and the singer Stephen Fandrich, all accompanying Oren with his electric guitars, autoharp, and percussion. The recordings have been made at different times across the world – Australia, Seattle, London, Luz and Milan – and assembled in the studio with the help of Randall Dunn. What results is a tightly integrated and intense piece of micro-tonal groaning, as nebulous as a swarming galaxy. As with all of this album, “understatement” is certainly the keynote of the day, but there is exquisite detail and discipline woven into every strand of this “knotted” composition, and it’s not simply another self-indulgent drone-morass of the sort that blights contemporary music like Dutch elm disease. Without wishing to dive straight into the deep end of the “superlatives” swimming pool at Swiss Cottage, I’d have little problem aligning this ambitious and sustained piece of work alongside recent compositions by Reinhold Friedl or Yannis Kyriakides; though to give credit where it’s due, it seems that most of the arrangement work for this exceptional piece was executed by Eyvind Kang rather than Oren. The press notes highlight the subtle but very propulsive percussion work of Talia, indicating that ‘Knots’ also works as an update on the electric jazz of Miles Davis, the confidence and swagger of Miles’ music restated with all the qualifiers of 21st-century doubt and uncertainty. And besides all the spectral composition undercurrents, there’s a hint of doom metal in the menacing bass growls…a very accomplished record and one that will probably come to be regarded as a significant benchmark in Oren’s oeuvre.