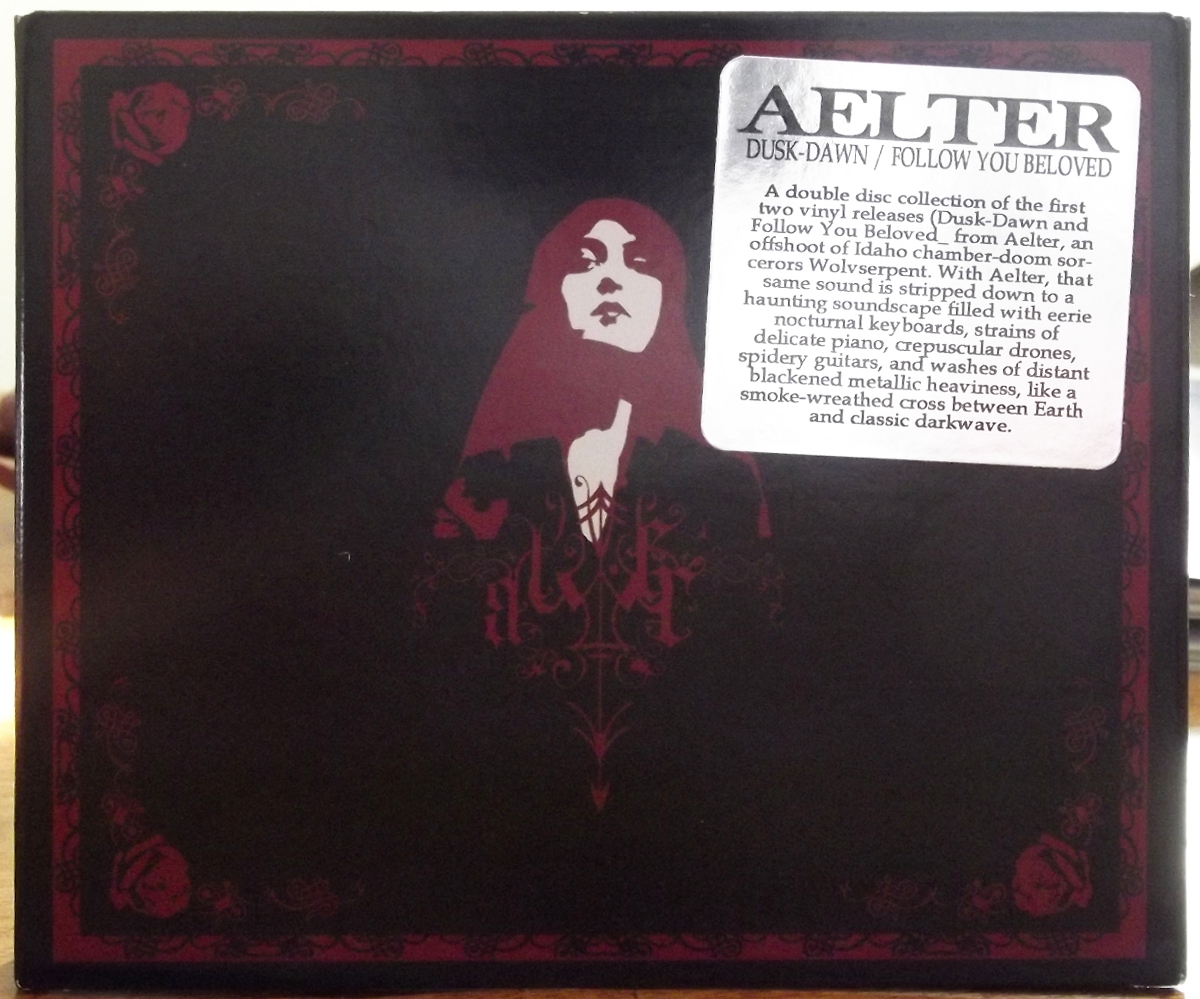 A repackaging of two recordings that were originally self-released as vinyl LPs in 2009 and 2011, “Dusk Dawn / Follow You Beloved” is an immersive double set of droning darkwave ambient mood pieces. There are only four tracks, each originally having its own side of the vinyl record to itself. Aelter’s style here is minimal and repetitive and to be frank that’s pretty much all I can say that’s neutral.

For a supposedly ambient recording intended to be heard during the border periods when the daylight is dying but the night is not yet born, and when the night is fading before a new dawn, the music on “Dusk Dawn” is blunt and unvarying in its volume dynamics and range of sounds and melodies to impress listeners. It relies too much on repetition to have an effect and not enough thought is given to further structuring of the track: I’m thinking of strategies like layering the track with different sound textures that might pass in and out, the use of field recordings to manipulate memory associations with dawn or dusk. Of the two tracks, “Dawn” is the better of the two but relies on melody and orchestral grandeur to get its message across rather than mood and sound manipulation. There is nothing here that can be associated with the dawn of a new day in both a literal and figurative sense and the track has a very heavy-handed, burdensome feel when it should be light and optimistic with a fragile and child-like quality that can later develop into something more confident and mature. Probably the best moment is about the 12th minute on “Dawn” when there is a lone piano melody playing – but even here there is too much repetition.

The second disc is more in the appropriate mood for its theme of longing and dark desire: “Follow You” has a strong sense of yearning amid a slightly urban-blues landscape of lack and numbness. The delivery is still a bit heavy and lumpen and full instrumentation with singing comes a little too fast: maybe the synthesiser is too strong in the background. “Beloved” is a bit of a puzzle: it starts off icy and almost elegiac, then suddenly plunges into almost colossal, crushing swathes of guitar riff, glacial piano tone and howls of drone in the background. I imagine this sudden outburst of sound might be a wail of despair at the loss of a loved one. The rest of the track is rather sinister and malevolent in sound and mood with a testy, snarling guitar marking time while a subdued vocal hums a dirge and creepy church organ drones fill in most of the space in and around the strings.

There is something indeed insidious and malevolent about this second CD, as though it were really about a stalker staking out his (well, maybe her) prey, following the person’s every movements and when finally catching up, imprisoning or even killing the object of obsession to possess her (well, maybe him) entirely. There was a “Die Hard” version of this recording in 2010 (all copies sold out) so perhaps the theme of a predator stalking prey and catching and killing it is appropriate to describe “Follow You Beloved”.

On both discs there is far too much repetition for my liking and the range of instruments used and the way in which they were used were just not varied enough for the themes and moods Aelter is exploring. Even so, a musician whose creative ambitions far outstrip his/her musical abilities and playing limitations is to be preferred over one who knows everything there is to know about playing music but who is content to play the same thing over and over. Blake Green, sole member of Aelter as far as I can see, just needs to fine-tune his approach to creating ambient mood soundscapes by experimenting with sound as much as he can, associate and play with other musicians in the genres he wants to explore and not be afraid of leaving melody, rhythms and riffing behind.