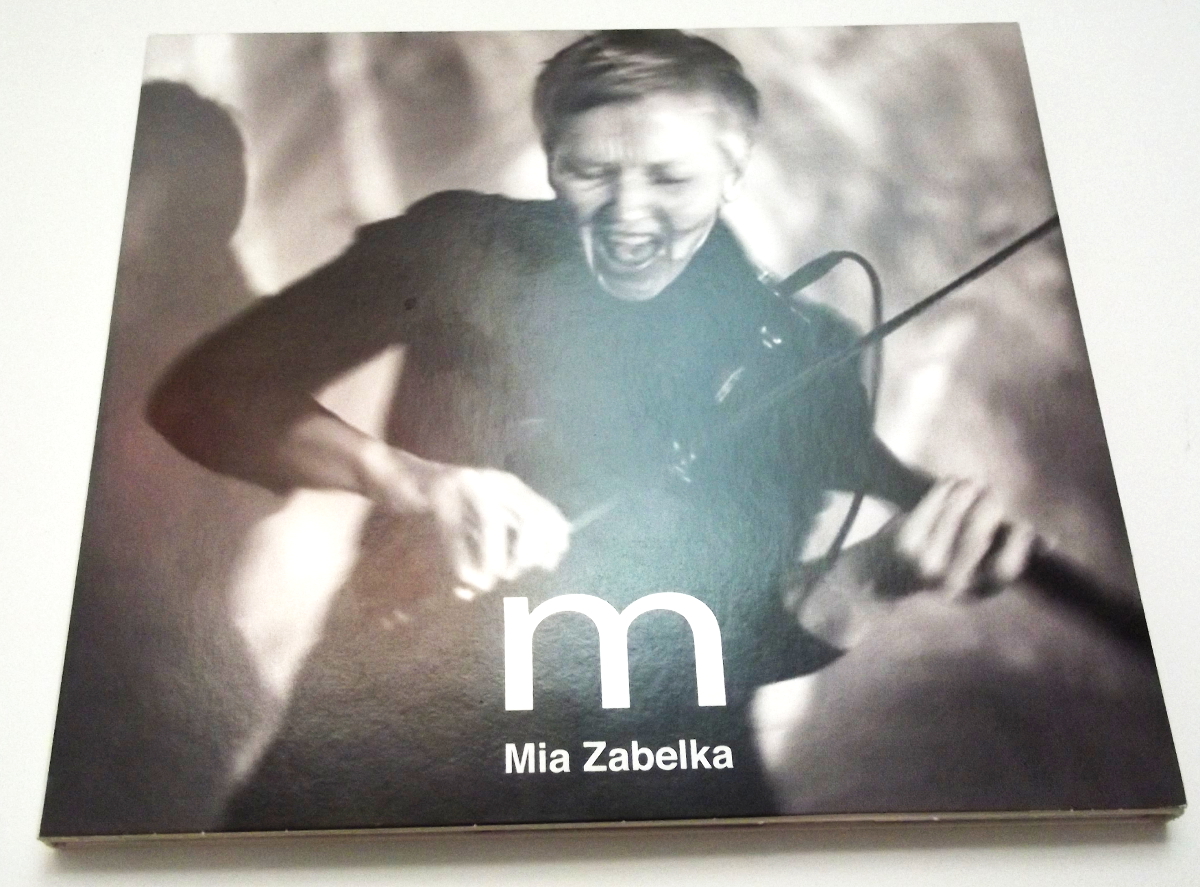 Highly inventive work from the Austrian performer Mia Zabelka on her M (MONOTYPE RECORDS MONO 045 CD). She’s got an electric violin and uses contact mics, live electronics, and her own vocals to supplement her playing – plus I understand there’s a more physical performance-art component to the act in the way her body moves and also helps with the playing. (Keiji Haino for one was determined that only through learning avant-garde dance could he train his body to play the guitar in a completely new way). Zabelka’s full of variations and ideas on this album – the very precise playing of ordered notes on ‘Korperklangmaschine’ is enhanced by digital delay to transform her into a violinist equivalent of Terry Riley, while the lengthy ‘Opus M’ is far more drifty and uncertain, a wander around melancholic terrains expressed through a very full and rich (through heavily processed) sound. On ‘Mind Scratching’, her unintelligible and half-mad vocal mutterings are layered together in a whispering melange that’s akin to a Henri Chopin extravaganza. There’s also more dramatic speech work plus music on ‘Adil’Iu’, and powerful mad-gypsy styled quaverings a-plenty on the complex and shattered tones of ‘Tenebrae’. Zabelka’s unusual techniques are exciting and innovative, and while some of these tracks are a bit formless and abstract to hold my attention, it’s very likely she’d be pretty unforgettable in a live performance. Endorsed by Pauline Oliveros as a “mighty mistress of the contemporary violin”. 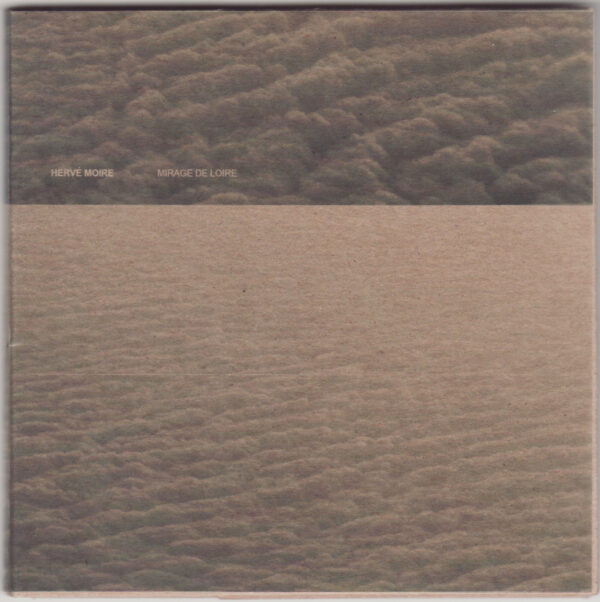 Hervé Moire constructed his Mirage De Loire (APOSIOPIÈSE 08) from field recordings of the Famed French river, and as many often do he reprocessed the recordings on his computer. His main aim is to make a tangible “transcription” of his own imagination as stimulated by that watery region. While this short (23 minute) recording doesn’t do a great deal to advance the genre of computer-processed field recordings, it does sometimes edge close to that evanescent mirage-like quality he’s hoping for, as if the serene and beautiful vision could evaporate at any moment. The faint blue cover image, printed on an acetate overlay, reinforces that fragility. This was submitted (and accepted) as part of Radiophonic Creation Day 2011, a festival which resulted in a limited-edition art box containing all the broadcast submissions copied onto a USB stick. Arrived 9th February 2012. 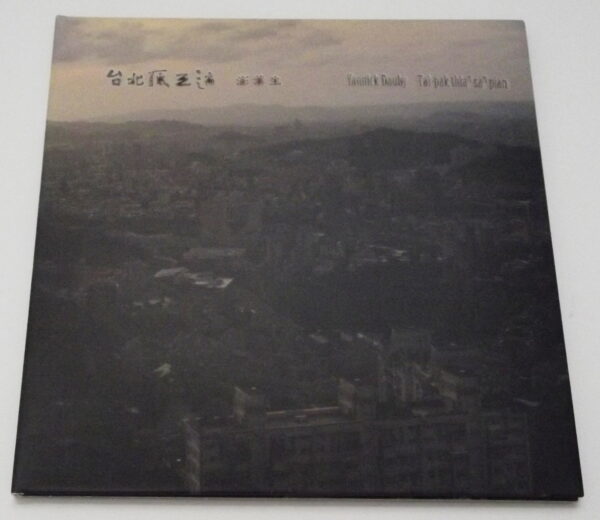 Yannick Dauby is also a field recordist who we last heard with the rather drab Overflows CD on Sonoris. His new one Taî-pak thian san piàn (KALERNE KAL03) is much more interesting; constructed with the ingenuity of a labyrinth, it takes some time to explore, but is full of rewarding discoveries. Three lengthy and understated compositions are derived from sounds in Taipei city, each work a commission dating from the last four years or so, and representing quite vivid and multi-dimensional views of the teeming life that’s all around him. ‘Nous, Les Défunts’ is a delirious mixture of city sounds, insects, wildlife, fireworks and interludes of drum-and-bagpipe music; it’s to do with a particular date in the lunar calendar, a cycle of life and death, and a return to the “underground realm”. If Dauby wants to suggest a rush of sonic information that is replete with magical and spiritual possibilities, he has succeeded here. ‘Taipei 2030’ is quite different again, and proposes that it’s possible to see twenty years into the future of this highly developed city simply by observing (and recording) the current trends correctly. One of these trends is air conditioning, which the city apparently needs on a huge industrial scale just to keep its populace alive. Accordingly, this track is dominated for most of its 20 minutes by a continuous and rather alarming mechanical air-circulating humming sound, which is so palpable it virtually pushes aside the heavy traffic. Thankfully, the intensity of this roar does subside, leaving us with more aural cross-cutting from city to forest – cicadas, wind, happy shoppers buying things in big shopping malls, trains, cars, snatches of music passing by in the night, confirming that life in the future will be not unlike things are today (there will just be lots more of it, especially commerce and useless consumer goods). There’s also the very spooky track ‘Ketagalan’, which refers to the aboriginal tribes that inhabited Taipei at least until the 18th century, but are now pretty much vanished. Strong on atmosphere, this chilling work uses sources similar to the above but also merges “encounters with other aborigine groups” with subway train recordings, and creates a powerful encounter between a ghost world and modern trappings of so-called civilisation. All three of these strong works create compelling environments through cross-fades, juxtapositions and subtle editing methods, and show that Dauby is not only acutely sensitive to nuances in sound and mood, but is somehow able to tap into an entire city’s psychological underbed with his microphones. “I am both loving and hating this noisy and fascinating city”, states Dauby referring to the place he’s lived in for four years now; “the only way for me to tame [it] was to record it”. Besides taming it, he’s captured further uncanny spirits and is releasing them into the culture. 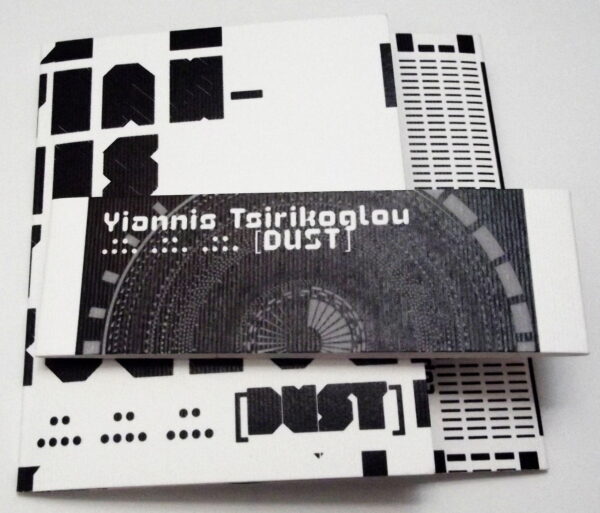 Got a couple of mini-CDRs from the More Mars label in Athens which arrived 12 February 2012, both of them in the small-run NOUS series, both unnumbered. [DUST] by Yiannis Tsirikoglou is a collaboration with visual artist Mariska De Groot and has a promising premise – it’s based on the technique of “optical sound”, which refers chiefly to the mechanism that existed on 16mm film projectors. The films were printed with an optical strip which passed over a tapehead built into the film projector, thus enabling synched sound at playback. Avant-garde film-makers have been exploiting and subverting this device for years; two UK artists who did it in the 1970s are Guy Sherwin and Lis Rhodes. It’s a field replete with exciting possibilities, which is why I’m disappointed with the very ordinary electronic purrs and bleeps on this CD; Tsirikoglou may understand the process, but his sounds are tame. However, they are edited chapters excerpted from the entire multi-media projected experience, which can be seen here. 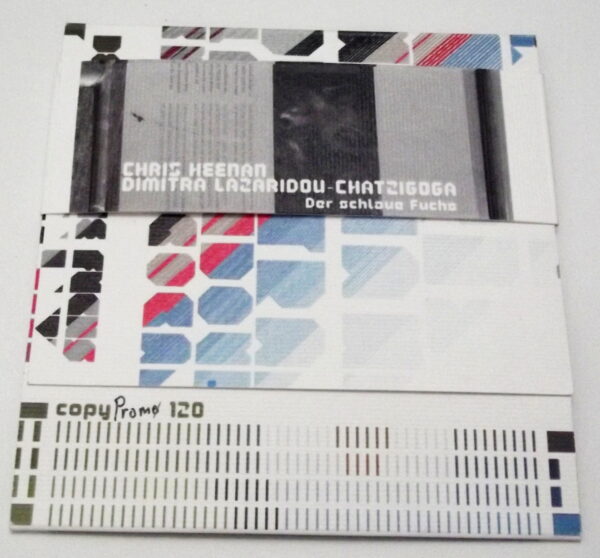 Der Schlaue Fuchs is an improvisation between the American clarinet-player Chris Heenan and the Greek zitherist Dimitra Lazarido-Chatzigoga. They’re both committed to taking their instrument into wild zones, Heenan by the addition of multiphonics to his range of unusual techniques and Dimitra by adding electronics, playing with the e-bow, preparing the strings in Cage-like manner, and inserting odd objects wherever she can. A lot of variations on this 2011 Berlin recording, including some pretty heavy bass drones and rasping purrs from the contrabass clarinet, and the zither resonates and twinkles in an oddly engaging manner. Not sure what it adds up to, but at least it’s a piece that moves from one side of the room to the other instead of lying there like a heap of unwashed laundry.