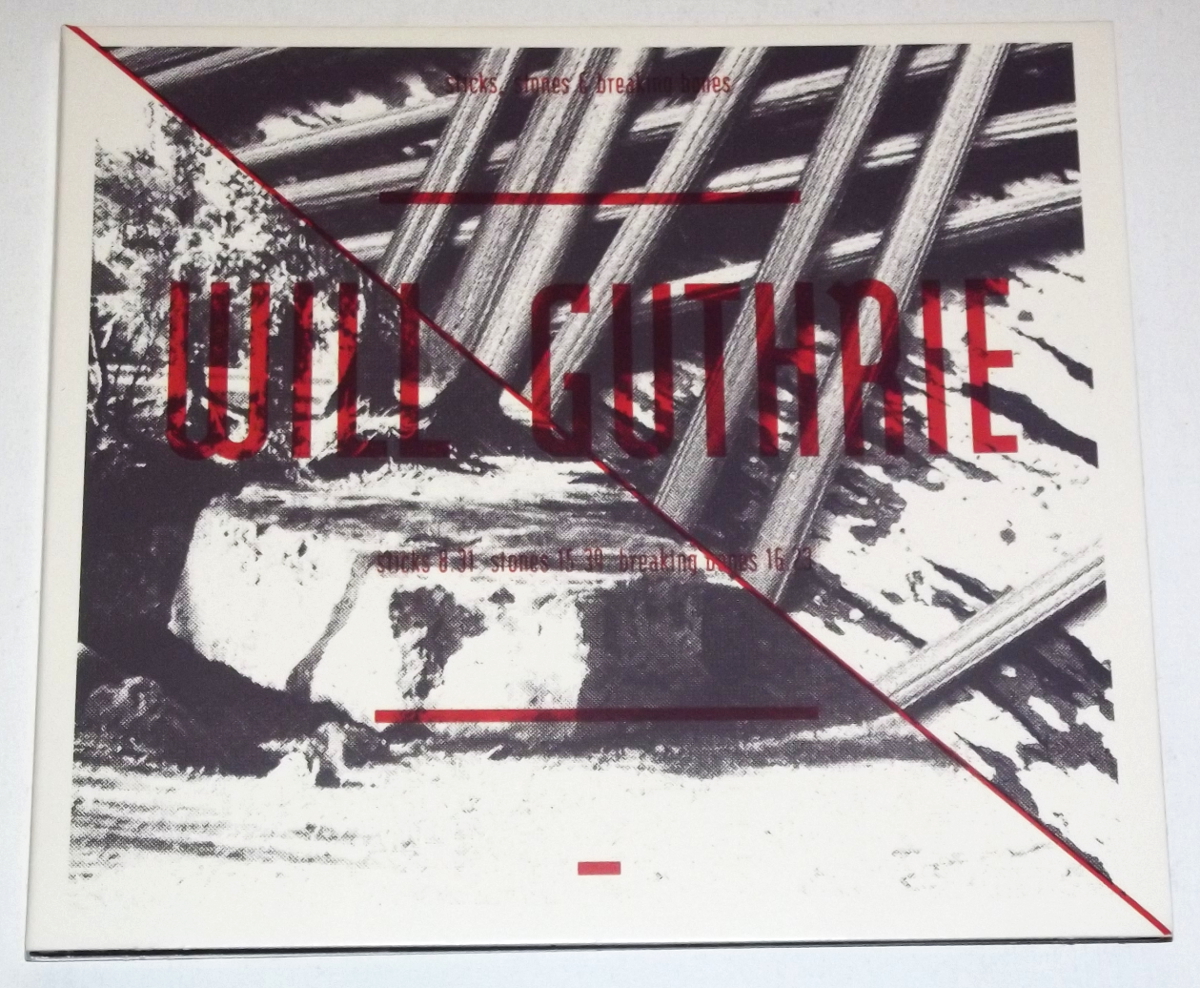 Australian improvising percussionist Will Guthrie boggles the mind with his extended techniques on Sticks, Stones & Breaking Bones (ANTBOY MUSIC AM11 / LESPOURRICORDS LPR0008 / GAFFER RECORDS GR032) which arrived here 8 March 2012. It contains three recordings which demonstrate his fluency with a particular and highly personal method of drumming which he has been working hard to develop over many years. Now in case you think you’re in for a dissonant listen along the lines of Les Percussions De Strasbourg (the Silver Series LPs that few in their right mind want to collect), I must stress that Guthrie’s work on this record is not completely disjunctive or broken, nor filled with the delicate tinkling of wind chimes or other aesthetic posturings. To put it bluntly, Guthrie rocks like a devil. The first track ‘Sticks’ is one which we can recommend to any honest fan of rock music, as it’s a blastin’ piece of muscular improvisation characterised by a steady pulse and inventive cross-rhythms, played with clarity and precision, resulting in room-filling thwomps that start by agitating the teacups and end up cracking the plaster on your ceiling. John “Drumbo” French fans should dismount instantly and fill their canteens at this oasis. On the strength of these 8 1/2 minutes alone, we have to nominate Guthrie as the best drummer Frank Zappa never recruited; he could have made nine types of mincemeat out of ‘Inca Roads’.

We’ve got a breathing space on second track ‘Stones’ which starts out with long metallic tones perhaps made by brushed cymbals, but it livens up at midpoint to kick into an even more elaborate worked example of Guthrie’s ingenious method. He explains it for the listener in friendly, jargon-free prose with the enclosed handout, and it’s a device that involves the repetition of short and very limited rhythmic phrases, but interpreted in multiple fashions – the phrase can start in the middle, be played backwards, or have its order or direction changed in pretty much any way that suits the player. He calls this method “mirror image rhythms”. It seems to involve memorising a tremendous amount of musical information without the aid of notation, and requires Herculean intellectual and physical efforts. Guthrie freely admits this approach is meticulous to the point of being obsessive, and often feels he’s in danger of losing himself in a “house of mirror music”, never to escape.

The payoff for all this is to be heard on the colossal final track ‘Breaking Bones’, where for 16 minutes Guthrie grinds his way through one of the most simplistic phrases in a drummer’s repertoire, and his aim in performance is to turn himself into a drumming machine, effecting almost mindless mechanical playing. You may think you’ve heard one of the ultimate expressions of this non-human aesthetic on the record made by Tony Conrad and Faust, but brother – you’re in for a surprise. Guthrie’s intention here is to push his body to the limits, stretch his muscles to the point where his own arms and legs start making involuntary spasmodic decisions on their own; it’s all part of the aim of the work, which he has performed live a number of times, and for which he has to get into physical shape (through hard exercise) before he even attempts it. It’s almost a matter of life or death for him, although he may not be putting himself in as much physical danger as fellow Australian Lucas Abela has done, with his madcap antics.

I’m still intrigued by what “mirror image rhythms” means as a technique, but one part of it I do understand is that perfection in executing it is virtually impossible, either because there’s too much information to remember or it’s too physically demanding, or both. As Guthrie admits, he cannot do the same thing note for note even after practising it for so long, but surely the point is that he tries. The act of attempting this physically challenging music is the artistic process that is relevant, whether or not absolute success is attained. Even Stockhausen admitted he was often scoring music that was too complex for any violinist to play, but when they achieved even 70% success, he was more than delighted with the results. In grappling with his mirrors and putting his tendons and ligaments through a stressful Hell that even exceeds the toughest yoga exercise, Guthrie says, “it keeps resulting in engaging music for me”. That’s putting it mildly, Will!