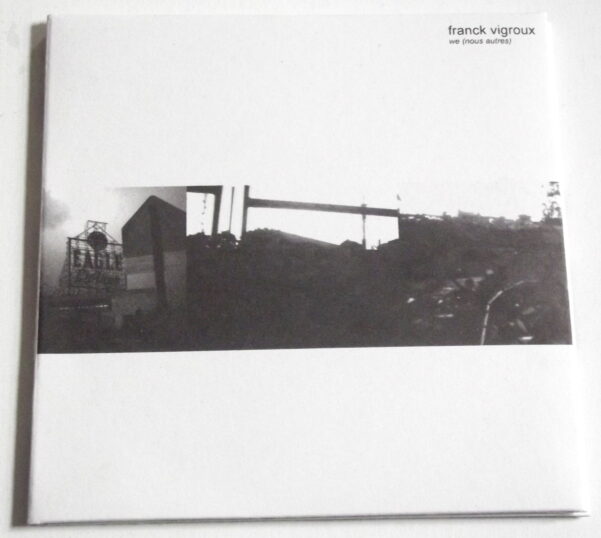 Here’s TSP favourite Franck Vigroux with a new solo record, his first for about two years since the exciting and pessimistic Camera Police, which took a stern unblinking look at modern surveillance methods. We (Nous Autres) (D’AUTRES CORDES RECORDS DAC 2021) is not informed by so specific a theme, but the titles such as ‘Death in Paris’, ‘Ininferna’, ‘Fire’, ‘Crash’ and ‘La Mort’ should alert you to the inflammatory nature of the music here. Many tracks demonstrate Vigroux’s strong capability in terms of manipulating and sculpting electronic noise on a grand scale. There’s a very physical, manual quality to the way he assembles sound, smearing vats of lard with one hand while controlling an enormous derrick with the other, swinging steel-like girders of digital burr and buzz into place. When he’s not hammering another rivet into the cast-iron coffin of 21st-century schizoid man, Vigroux exhales from his poisoned lungs bleak and foggy atmospheres such as ‘Bruisme’ or ‘Ashes II’, which are positively Ballard-esque in their remorseless misery. There’s also the splintered and nightmarish consciousness of ‘Death in Paris’, which in less than two minutes posits a horrifying future where your modernistic all-automated apartment (all its utilities computer-assisted, natch) is rebelling against you at every turn, and gloomy resigned robots wait outside with the express task of hammering your face into the wall with mighty metal mitts. Speaking of Ballard, there is the 14-minute ‘Crash’ which in title at least pays homage to the respected English dystopian, and concludes the album by leading us on a lengthy tour around many aspects of the modern urban hell we are doomed to create for ourselves, and combines most of the techniques used so far into one monstrous track – vicious electronic growls, fragmented inhuman voices, white noise, and depressingly vacant ambient fogs. Even if this cut ends the album on a relatively serene and calming tone of minimal drone, you’ll still be crushed into a compressed block of meat by the claustrophobic weight of Vigroux’s brilliant music. Listen out too for the “abrasive distorted electronic beats” as noted in the press pack, and the contributions of vocalist Annabelle Playe. Vigroux uses a lot of electro-acoustic methodology in all his music, but I sense he works in a very intuitive and painterly style, rather than assembling content laboriously like a formal composer. The results always pay off, and his dark imagination flourishes. Received 18 March 2012.

The Gowanus Session (PORTER RECORDS PRCD-4068) is a fabulous suite of free-jazz-improvised music created by bassist William Parker, pianist Thollem McDonas, and Nels Cline with his electric guitar. Californian improviser Cline may be familiar to you from records he’s made with Thurston, Zeena Parkins, Chris Corsano, Alan Licht, Henry Kaiser and many other untamed Americans. The Gowanus Session does contain two or three high-energy type cuts, which propel themselves forward admirably without the aid of a drummer, but the trio exercise considerable restraint as they explore puzzling metaphysical mysteries on the quieter, slower tracks. The album is mainly about the combination of unusual and far-out sounds, textures and tones, and it’s loaded with tasty, dense musical fillings. Parker for one serves up a fabulous range of techniques, such that his bass performs as a growling droner or pattering percussive instrument as the situation demands. McDonas supplies rich and baroque chord shapes, melodies and patterns, while Cline is generally let off the leash to go completely bonkers – aggressive feedback blasts, intense high-octane soloing, and amplified curved shapes that fall out of his solid-body guitar like dollops of Baskin-Robbins’ finest. Recorded and mixed by Peter Karl in his studio, and it’s got cover art by Cork Marcheschi, a former member of Fifty Foot Hose. How much more hip could it be? Received 20 March 2012. 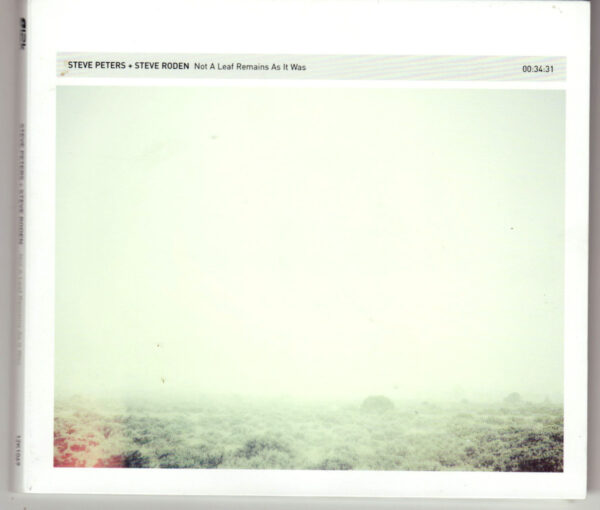 Just noted Steve Roden yesterday and here he be again, this time in a team-up with Steve Peters. Not A Leaf Remains As It Was (12K RECORDINGS 12K1069) is largely a vocal record of extreme delicacy and subtlety, with near-hesitant vocal wisps unfurling their washed-out tones to the accompaniment of gentle ambient music and small percussive sounds. The content for the lyrics was derived, in an extremely circuitous fashion, from a book of Japanese Jisei, a form of poem supposedly written by Japanese monks at the very point of death (though according to some scholars, warriors and poets did it too). Neither creator can read or speak a word of Japanese, but they weren’t about to let a little thing like that stop them making a covenant with this highly charged spiritual content. Sorting out the poems using a classification system that would have delighted both John Cage and Brian Eno (a methodology that involved using index cards), they proceeded to perform the fragmented texts in a remarkably selective fashion, at times settling for the utterance of a mere syllable simply because they liked the taste of it in their intoning mouths. Even English translations of the Japanese words were fair game in this phonetic approach. It’s thus something of a lottery whether any of the original jisei texts get through at all. In this manner, they hoped to avoid all the obvious pitfalls that await any Westerner who attempts to flirt with Oriental cultures, so there is not a trace of Zen Buddhism anywhere in the finished product. Seattle studio whiz Doug Haire has to be given a lot of credit for making the final assemblage and mix from these evanescent sounds, a task which to many would seem on a par with knitting fog. To its credit, this album completely eschews the use of electronic instruments, and any sounds which we may at first mistake for commonplace “ambient” drones are largely produced by the combined voices of Roden and Peters, as they quaver and whisper like avant-garde choirboys in Westminster Abbey. It’s also notable how, despite being so far removed from the original source material by dint of the elaborate near-conceptual cut-up methods used, the record still resonates with a deep spiritual feeling. It also preserves the very starkness of the jisei, a form which ought to “vividly express the sentiments of an individual standing face-to-face with death.” 1 Received 18 March 2012.