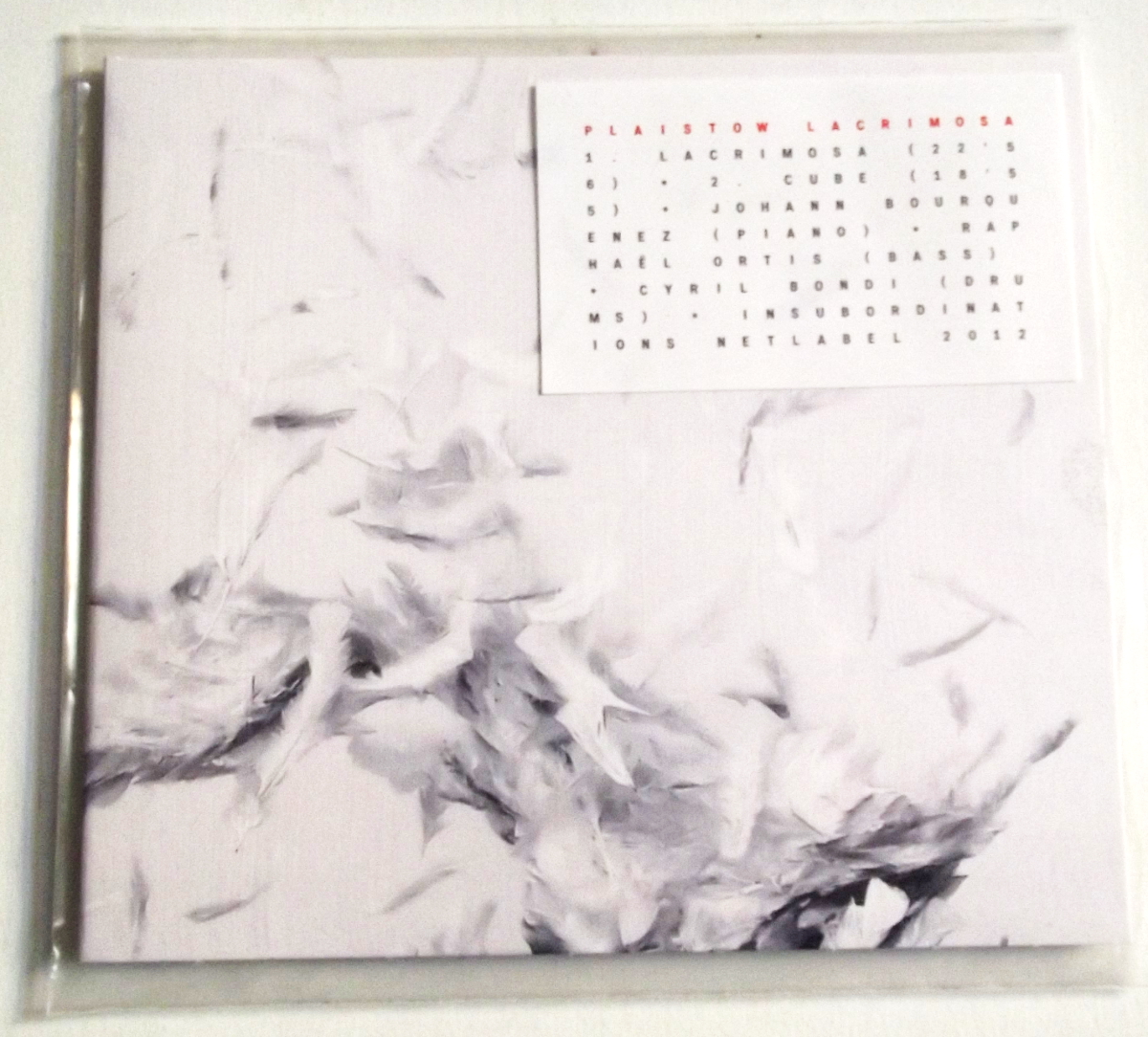 Lacrimosa (INSUBORDINATIONS NETLABEL INSUB.DLT01) has some fine instrumental music from the Swiss trio Plaistow, comprising Johann Bourquenez on the piano supported by the bass guitar of Raphaël Ortis and the drumming of Cyril Bondi. In their own understated way, these three talented Europeans are doing a lot to overturn a listener’s expectations of jazz trio conventions, and on this album frankly own their interest in the minimal piano arpeggios of Glass and Reich, allied with a solid approach to mechanical drum and bass playing. On the title track this results in some 23 minutes of compelling, repetitive music which won’t let your ears go nor surrender its friendly embrace as it weaves you, the unwilling dancer, around a virtual grand ballroom. Bourquenez in particular fills out the cold precision of standard minimalist techniques through striking rich and warm chordal shapes that evolve and shift in line with very human, intuitive rules…he paints chord changes in diffuse watercolour mode, rather than delineating them sharply in the style of a Mondrian or Ellsworth Kelly. Then we have the equally warm and human rhythm section, who far from acting as a two-man version of the sequencers on a Massive Attack album (as they would seem to wish, according to the press pack), provide a suitably solid structure for the colourful piano drapery to unfold. The results in this case are like a tent of the Bedouin in the desert of contemporary music. On ‘Cube’, the bassist and drummer are showcased with far more complex and tricky time signatures and flourishes that owe as much to European progressive rock as they do to trip-hop. Bourquenez meanwhile restricts himself to single-note plucks that have been treated and filtered to resembled the obsessive plectrummings of a very disciplined lead guitarist. On dirait a more laid-back version of 1970s Miles Davis without any egotistic posturings…it’s supremely accurate music, the tautness of every note and the simplicity of the clean, direct approach is just a delight. They’ve released five albums to date and Plaistow have made all their music available free for download as a matter of principle, and find this attitude doesn’t damage sales of physical product at their concerts; hence they found a home on the Insubordinations net label. The “feathery” cover art may not be much to look at, but the music is like a muscular “wee gem” lettuce standing on two sturdy legs. 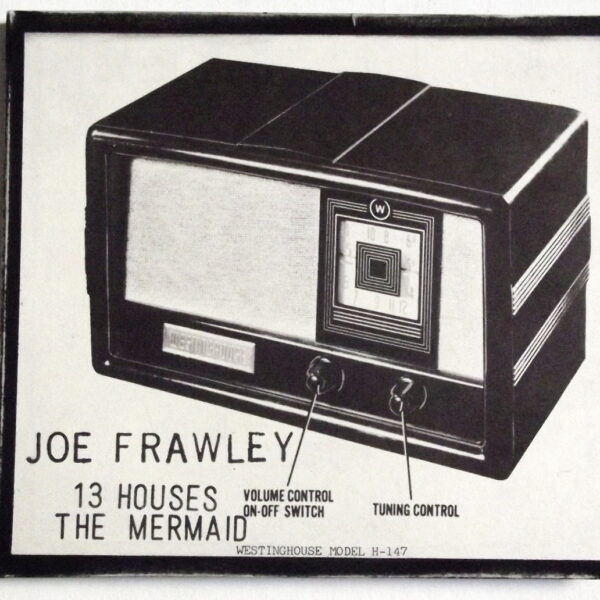 In Dreams I Walk With You

American oneirist Joe Frawley has self-released a lot of his oeuvre, but 13 Houses And The Mermaid (TRS013) was put out by Time Released Sound, a small hand-made USA label which specialises in tiny editions with individually crafted covers. I wish I’d told you sooner about this fine item which arrived here 09 March 2012, as it’s already sold out at the website. Musically, Frawley works with his familiar techniques of layering his romantic piano fugues with exquisite sound-collages, using spoken word and sound effects. Previous works (no less beautiful) have resembled elaborate literary puzzles which, given enough time and a library of Borgesian proportions, we might be able to decode. 13 Houses And The Mermaid by contrast is more fragmented in its underlying meanings, much more dreamlike in its connections, and sparing in its distributed verbal and visual clues. There are however suggestive themes which recur from previous records; train travel, and the image of a lost or homeless young woman. Imagine a very fractured, evanescent form of cinema, much like the impossibly wonderful miniatures which Joseph Cornell used to craft through his patient editing and distillation of existing footage. Frawley is also content to align himself with David Lynch’s films, most likely the confusing and labyrinthine structure of Lost Highway. Frawley doesn’t quite probe into the same dark corners of noir psychology, nor are his charming “dreamstories” especially threatening; but in his measured and crafted manner, he does succeed in stirring nostalgic emotions in a completely unique fashion. Aided by Greg Conte and Melanie Skriabine, whose musical and vocal improvisations were incorporated into the composition.

The Mystery of the Red Dragon

Enigma of the month was sent to us on 08 March 2012 and may have arrived from Manchester. Only a small red printed symbol on the hand-made card cover gives any indication of the creator’s name, and said symbol is also stamped on the four postcards inserted in glassine wallets inside the cover. The murky grey images may correspond in some way to the four pieces of sound-art on the CDR, which is likewise a thoroughly baffling spin. The second track is 17 minutes of uncertain vaguely musical plucks on what might be an underwater guitar or a harp strung with lengths of chewing gum, surrounded by some equally hesitant percussive noises. So far this resembles music made by two shy ghosts in white sheets who won’t even come out of hiding as they perform their wispy and ethereal music only for the ears of those who dwell in the phantom zone. The recording itself has a slight hiss too, adding to the distancing effect. After this, the third track is just about identifiable as saxophone music, a lone horn played with such a melancholy quaver and sob of futility that you want to go and throw a warm blanket around the shivering husk of a man who’s making this music. Shortly, he’s joined by the rhythm section – some guy rattling the steel bannisters of a deserted factory stairway. Or is it the underwater guitar again? This music plays hob with a man’s senses until you start to feel somewhat unreal, floating in a dreamlike world where logic and proportion have fallen sloppy dead. At length, a piano joins the ensemble and somehow the music gradually begins to coalesce into a washed-out, wafer-thin parody of improvised jazz. You were expecting melodies, maybe? Forget about that…the “Red Monad” group, as I shall temporarily refer to them, take atonality in music into a new dimension, and this forlorn track stumbles along like a wounded insect walking across a plate of Copydex glue. There are two other tracks, including the gritty short opener of chuntering noise which might almost be mistaken for field-recording type music (of the industrial machinery genre), and the last four-minute piece which contains more full-bodied playing, continuous rather than broken sounds, and evidence where the musicians are communing with emotions that resemble warmth and compassion. You’ll find the pace of this one infuriatingly slow, but if you can find your way to the core of this very extreme music, I’m fairly certain it will be something you have never heard before. Assuming you can ever find a copy, that is. The “Red Monad” group have chosen the path of complete anonymity and I have absolutely zero information to pass on about contacts, names, or websites, nor even a recognisable project name. If the creators wish to make themselves known, qu’ils le disent!