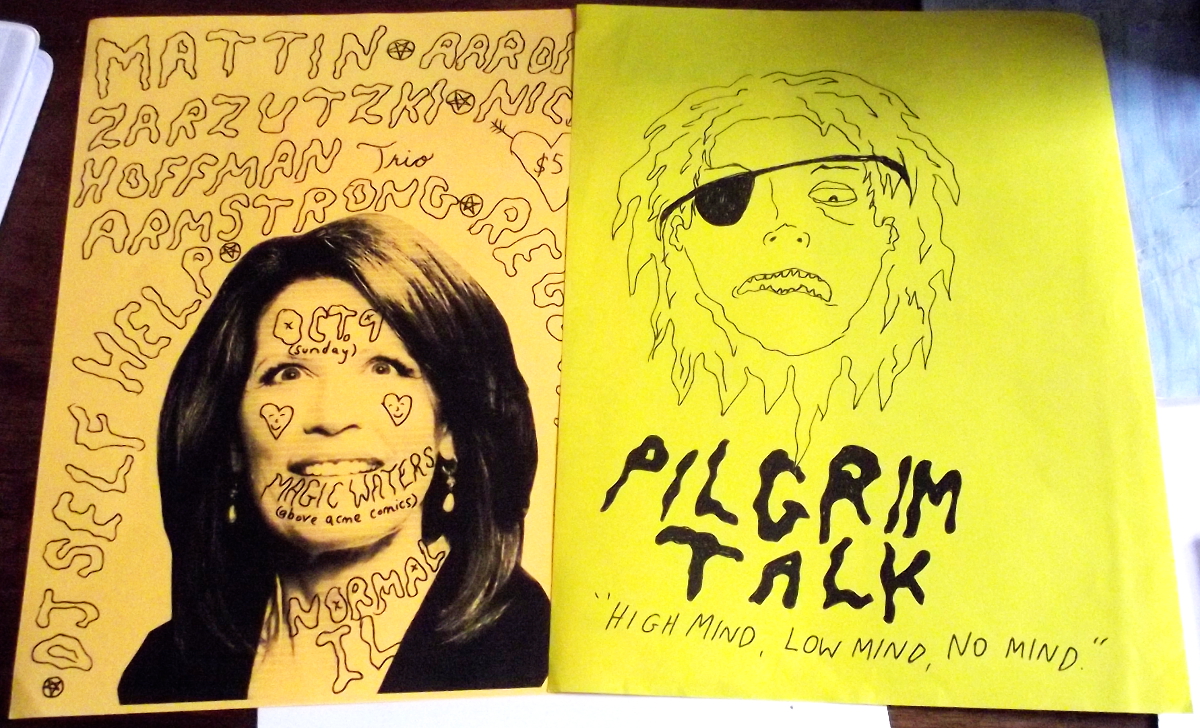 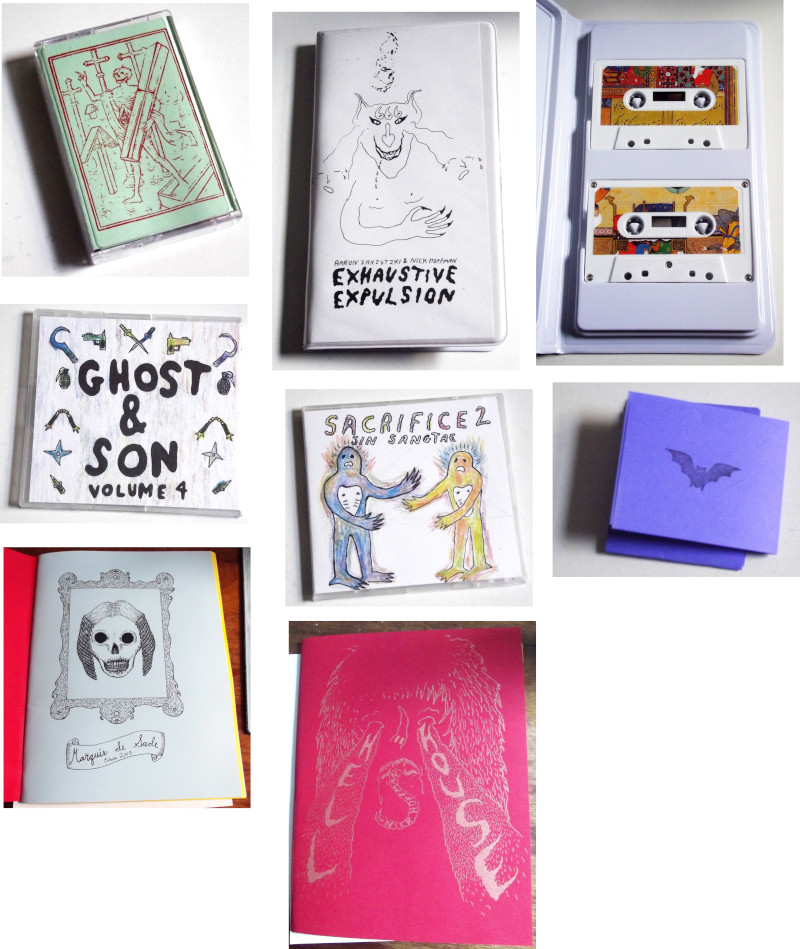 About time we took note of this large package of goodies from the Pilgrim Talk record label in Illinois which arrived 21 February 2012. The label is mostly Nick Hoffman who is interviewed in the current issue.

Noish & Xedh have a cassette tape rlhaaaa to (PILGRIM TALK PT18) of which the A side ‘Coyote’ is frankly pretty tough going with its puzzling tracts of humming noise and half-hearted feedback squeals. The B side ‘Psy Htgu’ contains radio bursts and occasional intriguing snippets of electronic garbage, but the interminable humming continues to dominate, even as matters develop into full-blown chaos and massive disorder. Some of this is richly insane noise monstrousness, while some of it is curiously vacant and monotonous, where it’s very hard to discern the underlying logical pattern. May take some time before we start to sensate the hypnotic magickal intensity of which we know Xedh (Miguel A. García) is capable of weaving with his bony stumps. Noish (Oscar Martin) is also a diabolical fiend who experiments with computer language and home-made processing tools to mutate his field recordings in unpleasant ways. The figure of Death is printed in red on the green card cover and he steps out of a coffin while lifting its heavy lid as if made of balsa.

Plenty demonic imagery on Exhaustive Expulsion (PILGRIM TALK PT19) by Aaron Zarzutzki and Nick Hoffman. Two cassettes in a white vinyl pack. That’s Hoffman’s linework on the cover there. This is another example of near-futility. I would almost be tempted to call it a cross between doom metal and minimal improv. This low-key electric drone noise and shuffling about is just so modest it’s almost afraid to show its face. It’s like hearing the work being performed in the house next door. Only it’s more like workmen banging about with electric drills and belt sanders. There is more activity and even a little more presence and purpose as the work progresses though, and if you persevere across these four sides of magnetic tape you too may end up as inert and impassive as the anonymous man in suit and tie on the back cover, so ominous a figure his image appears three times. The inserts give us images from religious icons, the pyramids, and a magnificent possibly Chinese building in the mountains. And what’s with these minimal printed texts? Are they track titles? They just keep restating short, punchy messages about death. They are like crossword clues to a morbid cryptic crossword. So is the music. The only way to solve the crossword is by killing yourself, or others. It’s like the template for an extravagant masterpiece of doom metal music, merely awaiting the requisite musicians to step in and complete the outline with their loud amplifiers and expensive guitars. 50 copies of these edited live recordings, made on an “ancient tape machine”. You’ll be exhausted and expulsed, not to mention exasperated.

Electronic musician and improviser Jin Sangtae made Sacrifice 2 (GHOST & SON GHOST 4) using car horns. Another piece that sounds like it was recorded at a tremendous distance. I sense a pattern emerging here which may help us understand Hoffman’s aesthetic. This is a primo example of junkyard art improv with a vaguely “metallic” feel underpinning the largely unidentifiable sounds. It also presents the atmosphere of the room very well. The space in question is the Seoul Art Space Mullae. You will come to know its walls, via acoustic methods. After about 15 minutes of uncertain rumbling and shuffling, the work finishes off with some high-pitched squeals that are completely insufferable. More like car alarms than car horns. But maybe they do things differently in Seoul, automobile-wise. So far Hoffman’s vision of musical Hell is shaping up to be fairly grim in its desolation and unshakeable sense of futility. A strong vision, i’faith.

Just found Red River / Rio Tinto (GHOST & SON GHOST 5) by Miguel A. García in the package. Already reviewed this one and it’s a fiery bowl of chilis. Great to have another copy of this cobra-infested cable-biting noise-jam. Nine tracks of loopy abrasive gibberish. Almost a whole band at work on this Madrid mash.

Hell House (PILGRIM TALK PT 16) is quite a different proposition to all the above in many ways. Credited to Nick Hoffman, all the music is by Eyeless Executioner. Given that he’s the type to form and disband 18 bands and projects before breakfast, Eyeless Executioner could be one of Hoffman’s forays into the field of satanic metal (another one being Back Magic, a sort of garage-metal combo which I personally enjoy). It’s just that compared with the above, it sounds almost like a professionally-produced record. There are overdubs, power riffs, melodies, drumming, vocals, and guitar solos that make sense. It may not be especially innovative, but it’s a decent slab of Black-ish guitar metal with the strained and grunting generic singing we love so well, its melodies played in mean and menacing minor keys. Hell House is presented in a superb oversize 56pp booklet packed with Hoffman’s lovely drawings and artworks, on shifting paper stocks, some printed in full colour, with a gold on red screenprinted cover. The drawings are presented one after the other in a near random fashion, not telling a story or anything, and some of them have little inset images which make even less sense. Plus a little purple folded gewgaw with some lyrics printed on it. Unfold it and die…think of ‘Casting The Runes’ by M.R. James. 100 copies of this niftaroo.

In many of these Pilgrim Talk releases under discussion, even those not made by or involving Hoffman, there seems to be a discernible commonality in certain key areas:

While some listeners and indeed many musicians might tend to regard the above shopping list as a catalogue of calamitous proportions, to Pilgrim Talk these things are core to the label’s defining aesthetic, I would propose. #3 in particular is very refreshing to me personally, when one is constantly being fed “explanations” of a piece of music by its eager creators. Even if you might think from my descriptions that the music here is unbearably boring and painful to endure, I would still recommend that you seek it out. All this music has a directness, honesty and spontaneity that is hard to come by in the world of over-manicured, pre-processed and self-professed experimental noise. Let the sense of strangeness and weariness dissolve, and you too will come to perceive the fascinating corners, alcoves and bricks of Hoffman’s Hell House.