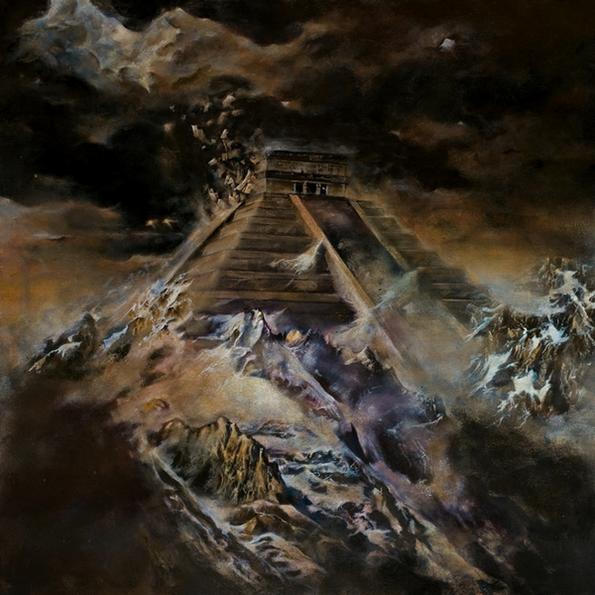 “Blood Geometry” looks like the best album the one-man black metal act Elysian Blaze has made so far: if it were better known, it might well set a benchmark for funereal and depressive atmospheric black metal / doom. There’s not much really to fault here in production values, technical execution and intense emotional expression.

A beautifully elegant piano instrumental “A Choir for Venus” starts the double set, accompanied by soft synthesiser wash that simulates distant sea waves, a yearning ghost choir and the occasional vocal by EB main man Mutatis. This introduces “The Temple is Falling”, a tremendous and epic track detailing an apocalyptic event occurring both externally and within the eyewitness who gives voice to the drama. The style of music is typical Elysian Blaze: a funereal pace, basic percussion which at times could be better, raw guitars with a jewel-like lead guitar solos, melodic grand piano trills, a cold and cavernous atmosphere of dark, sinister mood, and expressive vocals shrouded in reverb set far back in the mix. Ghost angel choirs add to the elegiac mood of this long piece. The music ebbs back and forth in energy, emotion and according to the narrative as set by the lyrics so there are periods of near-deathly quiet juxtaposed against bursts of anger, aggression and existential torment. Yet while the work is highly operatic in its musical extremes and can be very intense, especially in moments where there is just piano and solid blackness all around, it never seems self-indulgent or overwrought. If this weren’t enough, EB unveils “Sigils that Beckon Death”, a mini-trilogy of a journey of self-sacrifice to resurrection: not the familiar resurrection known to Christianity but a resurrection to a darker, grander and defiant godhead. The music is rebellious, malevolent and magnificent in its fury: fast percussion, multi-vocal roars and sighs, a ragged voice, deranged space-piano melodies and pouring showers of acid guitar noise paint the picture of a fallen deity rising perhaps to a new and different life. A sublime moment appears halfway where raw guitars are allowed to drone constantly while Mutatis growls and other voices sigh in the background amid echoing effects and fragmentary lead guitar and piano solo tunes. As with the previous track, there are passages of intense, concentrated quiet set against sudden outbursts of pounding music and emotion. The track is a major highlight of the album though the ending is very drawn out. Title piece “Blood Geometry” is a sorrowful piece dominated by piano and organ that rounds out Disc 1.

After a short introductory track, “Pyramid of the Cold Son” picks up where Disc 1 leaves off: it’s a ponderous track with eerie space-ambient synth tones and washes, and less emphasis on black metal guitar shower. Past the halfway mark the track becomes more black metal and faster in parts. Now the major track of the album “Blood of Ancients, Blood of Hatred” is upon us. The 37-minute opus is deserving of full album status itself. The major challenge for EB is to make it internally consistent. It starts off as a sludgey ponderous piece with slow, almost lazy drumming and burning guitars while the vocal rages. There is a surprising section in the track where piano takes over and makes merry with a sprightly tune. This track has everything: buzzing guitar drones that veer into derangement through a change of key, a rollercoaster ride through nooks and crannies of dark and intensely concentrated quiet, blasts of aggression, cascades through anguish and despair, atmospheric washes expressing solitude, martial episodes. Just when we think “Blood of Ancients …” couldn’t be any more intense, along come the last six minutes of the track with a repeating riff of heraldic guitar, organ, sighing choirs, plaintive spacey effects and Mutatis’s own tortured vocal: sheer intense emotion piles on over and over in the ridiculously simple minimalism of this section. This is a really transcendental work of music and the album could have ended at this point.

This double-setter is very much what I expected of EB plus more; in addition to guitars, percussion, grand piano and organ, Mutatis has added what appears to be orchestral and symphonic elements where the narrative arc of the album calls for something majestic and truly epic. The result is a complex musical beast that, however long and operatic it is, never feels bloated or overdone. The one thing that would be considered a drawback is the percussion: it doesn’t quite match the music for power. There are many, many moments on the album that call for thunder and the music would be greatly enhanced if Mutatis had a live drummer with the intelligence, skill, flexibility and strength to create and maintain complex percussion beats and rhythms that could take some of the load off the guitars and vocals. I respect that Mutatis may want full control over the EB project but there comes a point in the project’s evolution where the music and the ideas and themes it’s supposed to express become bigger than the person in charge of it and if it’s to progress any further, Mutatis will need extra musicians and input from others.

It would be worthwhile for Mutatis to make this concession to the music and he would still be master of the project’s direction and vision which is very strong and focussed to the point of obsession.