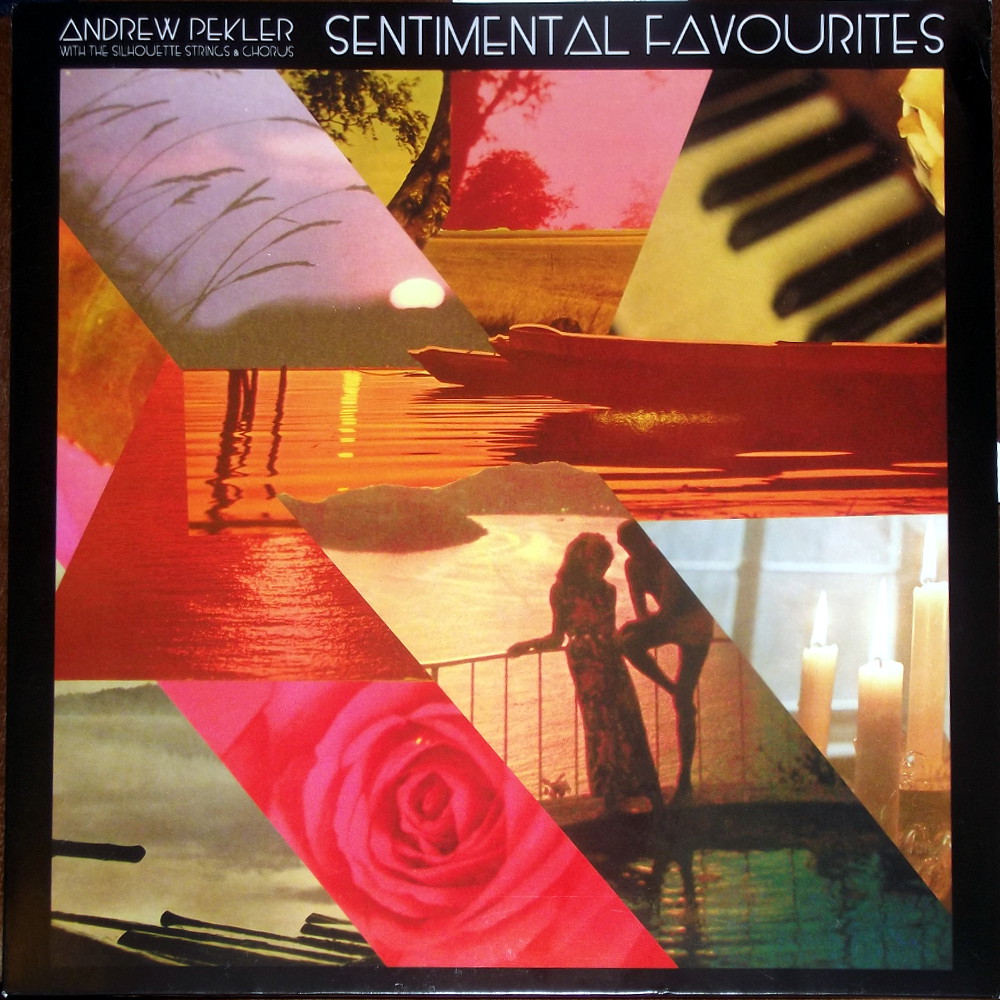 This Andrew Pekler LP is a decent collection of “intelligent” electronica music, by which I mean he pays close attention to odd dynamics, unusual filters, amorphous shapes and the production of pleasing sounds; there may or may not be a melody attempting to escape the cloying embrace of these downy, pillow-like eruptions of fluff and marshmallow. So amorphous indeed are his tunes that they seem to drape themselves around the room like deflated Andy Warhol silver balloons. But Sentimental Favourites (DEKORDER 061) also comes wrapped up in a heap of contextualising baggage; it’s a pastiche of 1960s-1970s easy-listening music, and the innocent-seeming digital melodies just drip with longing and nostalgia for a time of lost innocence and mainstream appeal. The sleeve art joins in with the game; the front cover is a collage of tasteful romantic advertising images (sunsets, flowers, countryside, candles), while the back cover lampoons the sort of trite and gushy sleeve notes we might have found on any given LP by Henry Mancini or Les Baxter. The track titles are carefully-composed hybrids of corny old standards; to read the listing is like chancing across a Carpenters LP that never was. There are even printed images of two faked LPs supposedly released in the series, and each tune refers to a non-existent movie or Hollywood production by an equally fictional production company. It lacks but a “Living Stereo” banner across the top of the cover to complete the effect. The final touch is that a limited number of the print run were housed in “salvaged” LP covers from second-hand shops, repurposed and redesigned to complete this audio handshake with the past.

Many there be who have tried to pay homage to, or cruelly satirise, this harmless form of music; Nurse With Wound has made ingeniously snide cutups from such LPs, People Like Us has continued that tradition in even more voluminous terms, and before them many artistes in the LA Free Music Society were extolling the virtues of Arthur Lyman, Esquivel and the charity shop rummage long before it became fashionable. Others, like P Miles Bryson who made Megalomaniac Decorator’s Quarterly for the Illegal Art label, have détourned easy listening music to such a degree that it becomes a weapon trained against the bourgeoisie, music rebelling against the very audiences it was originally made for. Pekler isn’t quite a member of any of these camps, and has worked hard on this LP to avoid even the slightest hint of irony. Instead he intends to fuse and meld his own style of electronica music directly with this “abandoned genre” of music as he would have it, and makes the record as charming and user-friendly as he possibly can. He wants to take back “mood music” and “sentiment” back from those cynical entrepreneurs who hijacked these things purely for the sake of record sales, and give them back to us in a more genuine, credible form. This Russian-born composer living in Berlin has some slippery ideas; we noted his Entanglements in the Orthopedic Sensorium LP from 2009 in issue 19 of the magazine, and that was further evidence of his deflective skill behind a mixing desk, resulting in a record that kept you guessing at every turn. One strategy in this instance has been to segue each piece with sumptuous recordings of rainfall, a fireside hearth, ocean waves, birdsong, owl hoots, and so forth; a kind of aesthetic reclaiming of the most absurd and banal cliches, replayed in the service of his eccentric minimalist drones and loops. Another strategy is one which I’d never thought anyone would dare try again, and that’s the addition of faked vinyl crackle over certain tracks, especially on side one. In many other hands, all of this would have resulted in a candy mountain of pure kitsch. Pekler somehow pulls it off, and manages to have his cake and eat it.