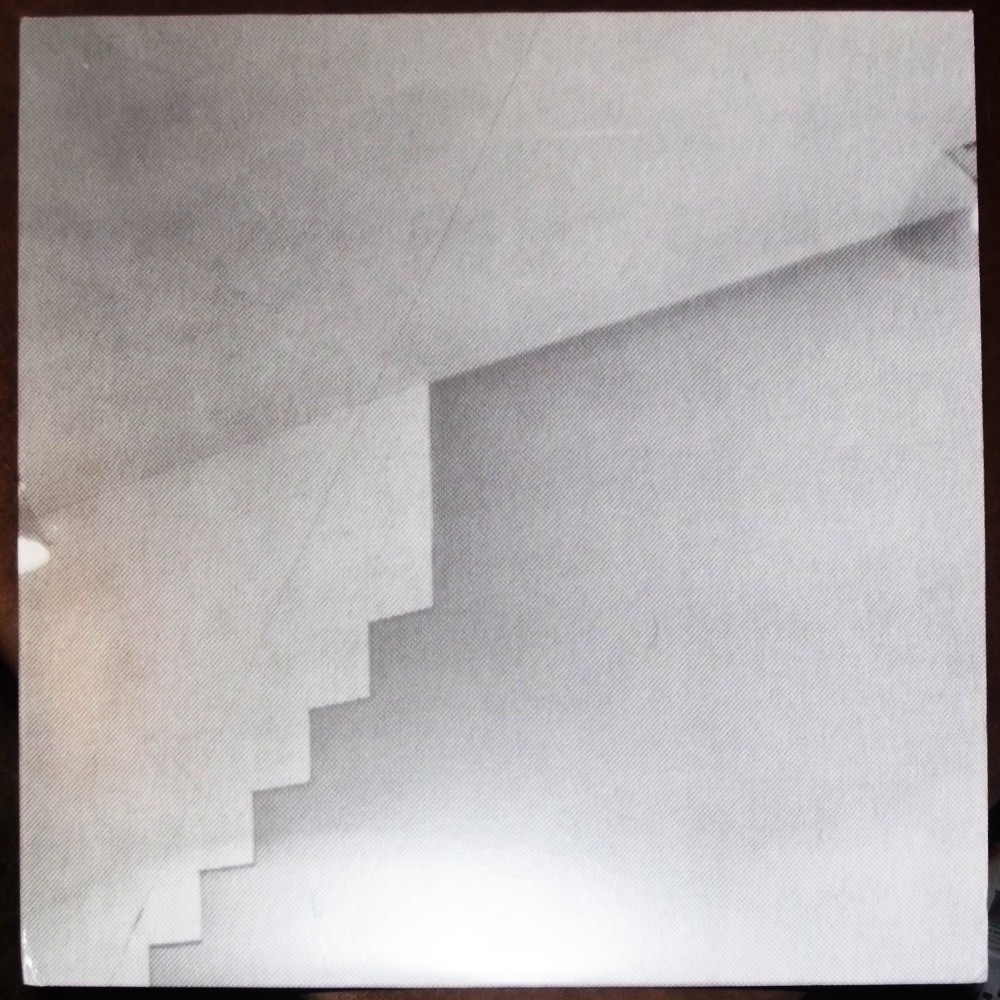 Got this grand LP from Ralf Wehowsky which arrived here 8th March 2012, along with a CD he made with DSM. RLW’s work was reviewed in the very first issue of TSP magazine, and I came to it late. I say that not to claim any prescience on my part, but to indicate how long he’s been making his consistently strong and distinctive sound art, and a lot of it has managed to hit home with this listener. If not exactly hitting home, it might be a more subtle action that involves sliding under doors or through windows, like an insidious serpentine force made of gaseous substances. Pretty much all we know about Sechs Abstande (BLOSSOMING NOISE BN055LP) is that it was made in the first half of 2008, and is described as “compositions and sound transformations”. So far, electroacoustic music RLW-style is the guiding principle, although we could mine the titles for more clues too. As an album it probably does not represent where Ralf is at in 2012, but with a shrug of the shoulders he seems to indicate it’s good enough, if taken together with afore-mentioned DSM CD and the Unwahrscheinlichkeiten item that was released on Waystyx Records. “Working with different labels destroys any chronology,” he mentioned in a brief email to me. “Tthe work of over 4 years, released within a slightly larger than 1-year-span. But this is a compromise to be agreed to.”

Some compromise…most musicians would give their right arm to generate just five minutes’ sound of this quality. Side A is somewhat more percussion heavy but the hammering sounds have been carefully treated to present themselves to the audience as something not quite familiar, and the patterns of rattling coups sit in some twilight space between composed and random. Two of the pieces on this side are scored for “an imaginary instrumental ensemble”. I just love the idea that using imaginary players would be an ideal way to realise a complex or difficult score rather than relying on the talents of Ensemble Modern or Les Percussions De Strasbourg, although they would do a good job too. Both A1 and A3 are among the most abstract pieces on the whole LP, by which I mean they are both deliciously removed from recognisable human traits as far as is allowable under international law. For most of ‘Irrung I’ we feel ourselves sealed in a metal canister or a titanium coffer, but even the vastness of this inhuman space is not sounding quite as it ought to; it feels muffled and denaturalised through tape treatments, and alongside it all is a weird enveloping tone which is neither comforting nor threatening. In the hospitals of the future, we’ll all be dealt a grisly fate like this, not knowing one thing or the other. ‘Irrung II’ ups the ante on that ambiguity by using backwards tapes (or possibly the digital rendering of that effect) to produce eerie tones that have a ghostly beauty, but even these floating shades may turn out to be phantom sharks in disguise, and those shark’s teeth are real enough. In between those two episodes, Side A throws out ‘Fragezeichen (Für Gespannte Haut)’, a title which refers to “taut skin”. The taut skin of the percussion instruments on this highly percussive track may be referenced, but it’s very metallic percussion and the only taut skin I’m sensating is my own hide as I tense my ligaments, endure the puzzling multiple layers of this very busy and pro-active track. If my ears had eyebrows, they’d be raised. It’s like experiencing a performance of avant-garde percussion music while also experiencing the cleaners walking through the art gallery venue some 6 hours later.

I’ve also been smitten with side two. It contains ‘Drangwäsche (Für Zirkuläre Systeme)’, a piece which over the course of 11 minutes managed to start making sense on some unfathomable level. One mark of RLW’s genius is the multiple layers used in its construction, the tiny intimate details of small sounds contrasted with the larger alien sounds that are like the groanings of sheet metal, or buildings stretching themselves. We’re given about three or four different energy-fields to concentrate on and they seem to be pulling in different directions. Music (near-music) slugs it out with completely abstract noise, but not loud noise. RLW rarely feels the need to be loud or aggressive when he can astonish with supernatural ethereal waves bleating and wavering in subtle tones. ‘Drangwäsche’ also impresses as a (possibly) systems-based work which is on the verge of falling out of control, a robot octopus whose flailing tentacles promise menace at every second, yet disaster is always avoided. There’s also ‘Ruin & Konstruktion (Für Gedampftes Metall)’; gedampftes translates as “silenced”, which made me think of muffled metal from side one and why I deemed this cut to be a second visit to that lonely canister. But here it’s layered with long tones which could be piano notes recorded in a certain way, and there’s also that disturbing sharp cut-off effect that comes from switching between tapes on a very aggressive mixing desk, hopefully a pre-war Magnetophon tape deck with the sort of switches that require great manual effort to turn.

Astute readers who understand German will have perceived that the album title translates as ‘Six Distances’, but there are only five tracks. My instinct is to treat the cover art as the “missing” sixth distance, in much same way that four of the “Fourteen Pictures” on Before And After Science were art prints. This artwork is by Makeup Diaries 1 and displays a brilliant use of the half-tone printing effect (newspaper dots) that can bring out the hidden aesthetic meanings of even the most banal images. Just ask Gerhard Richter. Here we have what I think is a detail of a vast interior space; a ceiling light is just about visible on the right hand side, while most of the picture plane is filled with a zig-zag pattern that woulda made Walter Gropius weep sympathetic tears of white formica. To top it all off there’s a mysterious diagonal line that runs from top to bottom of the image, which may be a steel cable specially brought along for the occasion by Paul Panhuysen. If that is not a perfectly clear visual statement about ‘distance’, then you may call me Meyer. To experience the other five distances, play this subtly amazing record to yourself and let it open swathes of space in your mental prison.