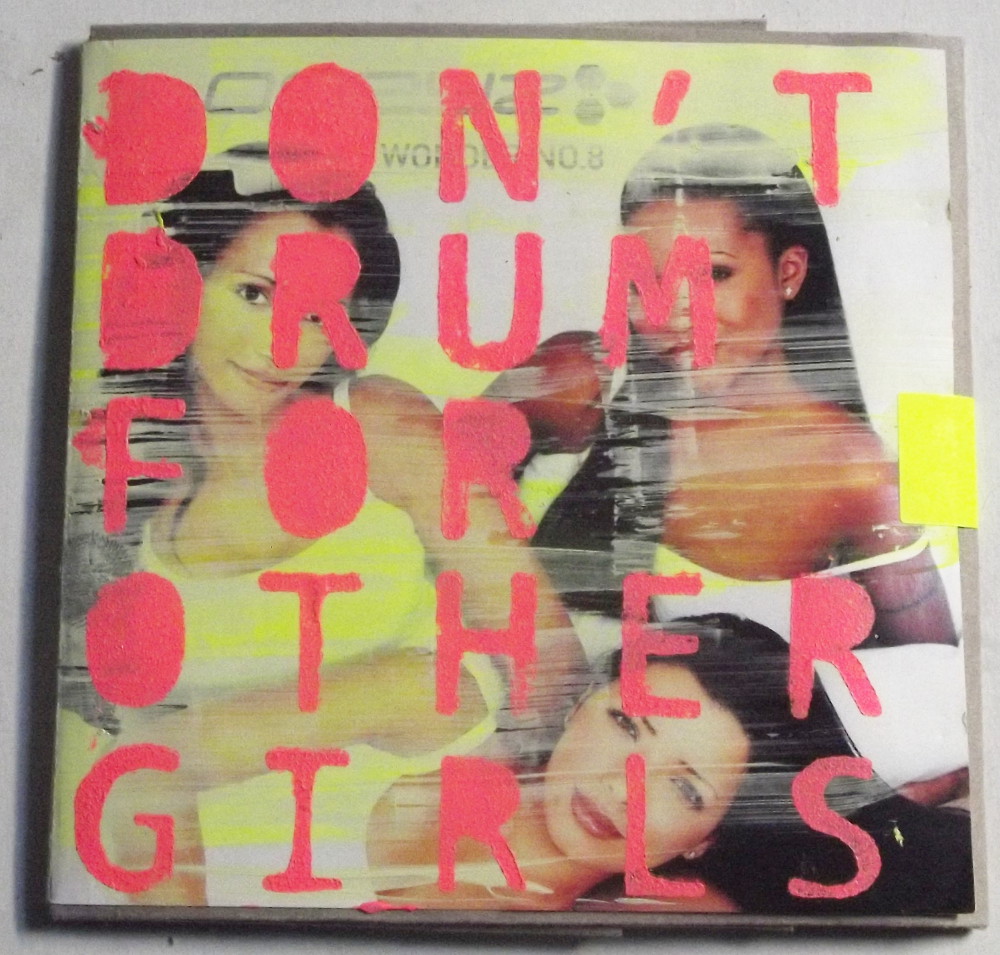 Season Two (SOLAR IPSE #01) is the latest team-up of those two Italian improvisers Ninni Morgia and Marcello Magliocchi; last heard them doing their guitar and percussion duo thing on the 2011 Sound Gates LP, which we noted this summer. Both are radical inventors or reinventors of musical instruments, Magliocchi in that he creates his own percussive instruments from found objects but also has many extended techniques concealed up his long white sleeves. His approach to playing the bowed cymbal, for example, creates a dynamo hum of evil proportions on ‘Medusa’, its tidal swells sucking you into a fatal whirlpool for 9 minutes. On ‘Avoiding Traps’, his suffused cymbal fog effect is like a cloud of liquid metal alloys floating in the room, capable of nickel-plating both lungs instantly. The Sicilian guitarist Morgia is one of the busiest guitar-players on the planet, equipped with arms and fingers made of recycled Slinky Toys. He does everything he can on his electric guitar apart from strike a recognisable chord or hold down a note in conventional fingering manner. Instead, distortion and mutation are his watchwords, muffling strings at every opportunity or causing them to hoot and howl like animals, and activating his strumming right hand to more or less pounce on the strings like a cougar from a tree, making unexpected dives and leaps and occasionally even shredding the flesh with his long sharp claws. Which reminds me that, pound for pound, this album is much more aggressive than the rather wispy and mysterious Sound Gates, the latter record resembling at times an electro-acoustic foray into the tunnels of the cerebellum, much as we loved it. Season Two isn’t exactly the improv remake of ‘God Save The Queen’, but half of the tracks are quite short and punchy and characterised by a thunderous undercurrent of bass tones and a considerable amount of shrill noisy attack at the front end. The nine-minute ‘Thor’s Tunnel’ in particular should endear this duo to listeners who derive twisted kicks from the more feral and untutored guitar-drum noise assaults of MoHa! or Mouthus. There are sterner and more meditative tracks, but overall a raucous and passionate album on which there’s no denying the musicianly skills of both these artistes, who pay close attention to interactivity, detail and dynamics in every second of these live recordings, yet are still able to blast out with the force of a dozen red devils when the occasion demands it. Arrived 22 March 2012.

Tales from the Crypt

From 05 March 2012, we have Joke Lanz and his Münster Bern (CUBUS RECORDS CB 368). Me, I’m still reeling from the fabulous two double-LP compilations 1 of his Sudden Infant work which brought home to me the importance and influence of this outrageously unique personality, besides being shocking, hilarious and terrifying all at once. This item is less of a confrontational noise assault-performance thing and shows Lanz’s diabolical skills in working the turntables on a single 26-minute track which he recorded live in the cathedral at a music festival in Bern. It’s mostly a mind-sappingly odd and bewildering frieze of aural collage, with a string of disconnected sound events (music snatches, voices, sound effects and generally unrecognisable goop) following the dark logic of a mind which only its owner truly understands. Church bells give way to dripping-tap electronica bloops, then dissonant avant-guitar plucks, then a sobbing voice, a deeply troubling high-key whine, then a calm TV announcer’s voice; by about mid-point the vocal elements are becoming quite grotesque, with speeded-up repeats and loops rendering their every syllable as pure gibberish. It’s like viewing a series of surreal art objects in glass boxes arranged in a long line, creating an impression on your mind which grows more nightmarish and ridiculous the further into the gallery you walk with tentative step. I say this to emphasise the separatedness of Joke’s sounds; some turntablers like to confuse us with multiple overlays which crash together into a sonic pile-up in short order, but here each item is presented to us in almost stark isolation, with the accretion of sounds only gradually coalescing to form a semi-connected statement. The natural echo of the cathedral only increases that sense of isolation, and some of the noises here feel like silly little clowns or cartoon animals performing their zany turns in the most inappropriate possible setting before a cold or indifferent audience. The disruption to clear thinking is completed by the interventions of Joke’s stabbing finger, aggressively halting, reversing and rubbing the rotating discs with his radical take on the “scratching” technique. And what a powerful finger it is too. I mean, just look at that photo on the back cover. It looks like it’s hinged in three places, something you could pull out of a metal toolbox and use as a car jack. Lanz’s sense of jet-black humour seems to have been a key operator for this work, but the lasting effect of Münster Bern is one of total absurdity, a miniature portrait of the futility and folly of existence.

Curio of the day is this package called Don’t Drum for Other Girls (SEED RECORDS SEEDCD33) which arrived 23 March 2012 in an elaborate screenprinted foldout cover. This was sent to us by the Department of Music at Goldsmiths College in New Cross, and may represent a stage in a music/art student project. It’s credited to a band called Sleeps In Oysters, but they just did the basic music and numerous other creators have been involved in the realisation of this elaborate multi-media package. Luckily I have the latest version of VLC media player which is capable of displaying entire contents of disc in a menu, regardless of their file formats. There are about five original tunes by Sleeps In Oysters and some remixes-reworkings of same by Diasonic, John Oyster, DJ Arctic Roll, Liquid Chris H. and Christ. The songs aren’t much more than basic girl-pop with electro beat trappings and semi-punky guitar chords, with a nondescript girl vocalist intoning the lyrics with very little real passion or expression. As pop songs go, better melodies have been written. So far it’s something of a cocktail, but from what I can gather from the press notes which freely invoke everything from post-punk pop to modern-day girl bands, stopping off at Cyndi Lauper and 1980s power pop en route, that is exactly the intention. Oddly enough the reworked versions of the songs are more interesting to my ears; ‘He Drummed Part 2’ strips away almost all the song elements and offers us an attenuated mechanical whine blended with an ambient background tune, while something resembling a mad prepared electric violin is sawn apart with fiendish glee. John Oyster is responsible for that, and also the ‘Son Of Drum Mix’ of the title track which buries the basic tracks in a compressed echo chamber while bringing some insane drum machine tracks to the fore. Curious rather than exciting, but even so it just about manages to demonstrate how conventional pop can be recast as vaguely experimental music. Equally odd is the performance artist The Strangest Pet, who adds a twisted spoken narrative to another version of ‘He Drummed’. Then we come to the moving images segment, which is a pop promo video for the title song made by Carlos Saez of Madrid. It hasn’t improved the song for me much (third hearing in and it’s becoming rather grating) but care has gone into building the colourful pop-art props, and the images of the musicians running around the town dressed as outsize Korg synthesisers have an endearing quality. We also see the artistes inside their cramped cardboard boxes looking almost frantic, trapped, beating against the walls of a cell. The package includes generous number of photos of the video shoot, and the other visual elements are folders of image files – collage artworks created by an English artist LustrousChemistry (i.e. Paul Hearn), who also assembled the hand-made package for the release. A good effort in all, but what is it trying to communicate? The package is an odd mix of banality, cliché and experimentation, and any shared ground between the diverse talents involved is hard to discern. I can’t find the missing pazzazz factor that would make this very mixed package truly lift off for me. There may be some intended ironic subtext about pop music, but it’s nothing like as coherent as (say) X-Ray Spex, Bow Wow Wow, ABC or even Sigue Sigue Sputnik.