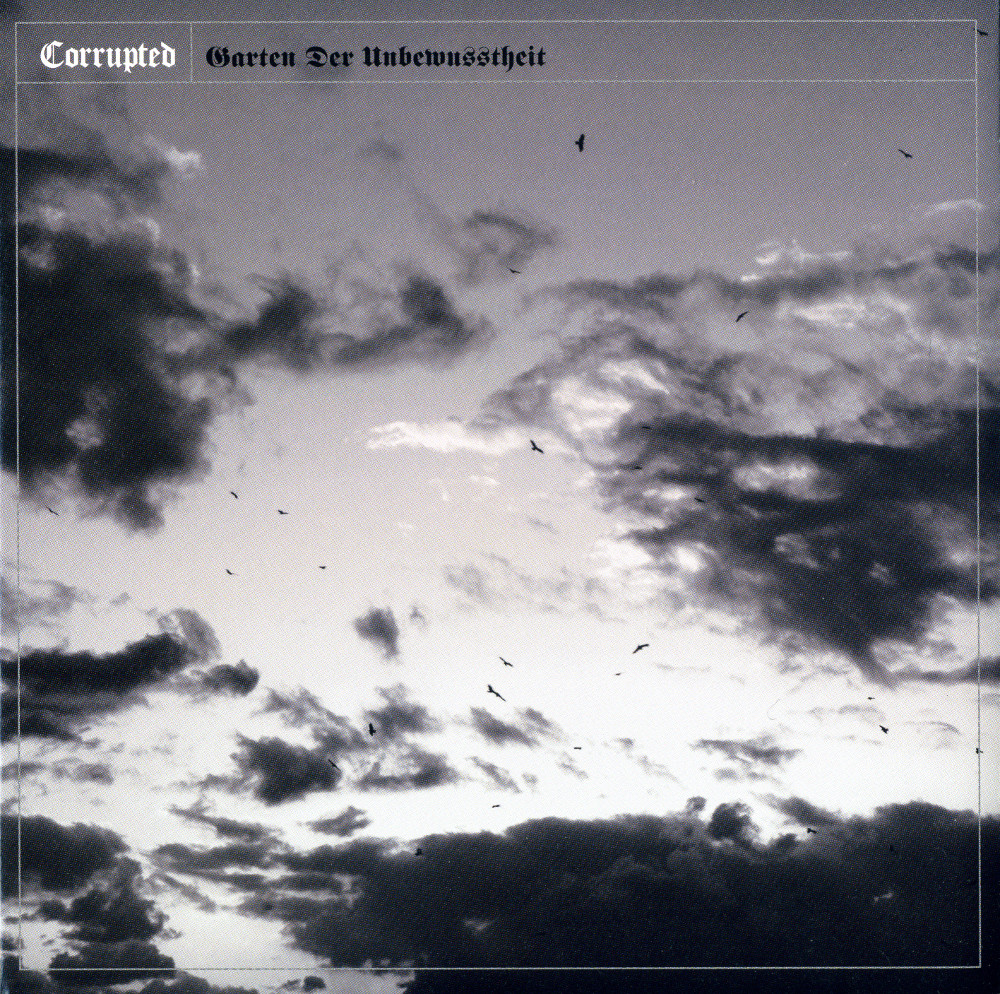 This album might be Corrupted at their most elegiac and wistful: the garden described in the album’s title could be a metaphor for planet Earth and all its natural ecosystems. I like to think my interpretation of the album’s title is consistent with the band’s general aim of criticising current political systems and societies, and standing up for oppressed peoples around the world. “Garten …” serves as Corrupted’s warning of what lies ahead if the world continues on its present path of self-destruction: this is a highly sorrowful and despairing work, epic and majestic in its description of ultimate tragedy.

Opening track “Garten” would appear to have an extremely long and drawn-out introduction of deathly quiet music and huge still space, animated only a little by Hevi’s whispered vocals, but the music then plunges into a near-orchestral passage of crashing percussion and guitar drones that sound like brass horns. Hevi’s whispers become long guttural groans. Interestingly about halfway through the track, there are trilling shimmers of guitar drone, possibly fed through a computer and sculpted into a very atmospheric sound, that might reflect a post-metal influence and which by its tone suggests a glimmer of hope in the devastation so far described. Unfortunately that hope doesn’t last long as the track crashes into another orchestral realisation of horror. As the piece dies down and limps off to a quiet finale, I notice that the music all the way through has a clean and almost smooth sound with hardly any of the crust and abrasive quality that usually appears on Corrupted’s recordings.

“Against the Darkest Days” is a brief track at four-and-a-half minutes of slow, frail acoustic guitar melody, nothing more and nothing less, that serves as a breather and extended introduction to the mammoth 30-minute “Gekkou no Daichi”. The track gradually acquires a darker, deeper, more ominous second guitar melody before plunging into long, pained guitar riffs and extended tones, sporadic use of drums and cymbals, rumbling guitar shower in the background and Hevi’s groaning vocals. The whole atmosphere of the track is of suffering, pain and desolation. As the song progresses, all musicians become more active and the music builds up with extra effects and sounds. It all reaches an early climax about the 12th minute and the music falls back into a coasting instrumental with a mix of clean lead guitar solo and roiling background guitar noise. Hevi’s vocals change to an angry or desperate whisper, depending on the point of view, and progresses to a constant if restrained rant that never quite works up into a full-fledged roar. “Gekkou …” gradually becomes a grand and defiant death cry, the last statement of a dying though still conscious species. Clean lead guitar solo trills and vibrates against the majestic backdrop of emphatic, crashing drums and cymbals, a continuous metal guitar rain and Hevi’s vocals. A sandstorm emerges to swallow up the music gradually.

In spite of the album’s gloomy mood, the style of music throughout has a hopeful, even optimistic and bright edge that rarely appeared on previous Corrupted releases. In the later parts of “Gekkou no Daichi”, the mood can be quite sunny even as the noisy storm conjured up by guitar feedback grows louder and engulfs the music. The album plays like a soundtrack for a prolonged funeral procession; “Gekkou no Daichi” alone certainly would qualify as the accompaniment to a funeral cortege from church to the grave. Admittedly the music is very long and monotonous in parts, and editing could have been applied to the beginning of “Gekkou no Daichi”, but I think the intention here is to involve the listener fully in the music, drawing the attention into the quiet, meditative melody of acoustic guitar and then breaching the consciousness with a heavy barrage of guitars and percussion.

Corrupted may not be a very original band and the guys try to play catch-up with trends in doom metal these days, incorporating a cleaner sound and post-rock elements that give the band’s music an additional dimension. No longer are the guys just glum reporters and commentators on what they see as a world that’s lost its way. They are now detailing its final end and calling on us to decide whether we’ll fade out meekly or make a last defiant stand against a universe that doesn’t care whether we live or die.