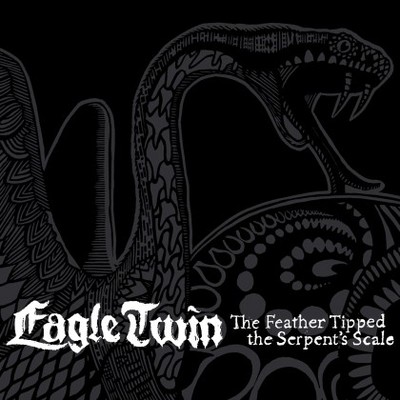 Reading the fine print on the gatefold sleeve of this, Eagle Twin’s second album, and seeing ” … This album marks the conclusion of a deep, sometimes dark, shared personal journey for all involved …”, I was, I admit, afraid that this heralded the end of the desert doom metal rockers but from what I’ve seen on the Internet, Eagle Twin are in for the long haul but perhaps in a different, if no less thoughtful and literary direction. Members Gentry Densley and Tyler Smith draw lyrical inspiration from poet Ted Hughes, the Biblical story of Job who had to suffer endlessly and undergo a transformation in his relationship to God, the 20th century Spanish playwright Federico Garcia Lorca and Star Trek creator Gene Roddenberry. Compared to the first album “The Unkindness of Crows” which was dedicated to our favourite black birds that fought the sun and were scorched during the battle, “The Feather tipped the Serpent’s Scale” is a cleaner, almost rock’n’roll affair though still very heavy, dark and monumental. Here, the crows burnt by the sun are thrown back to Earth in the form of black snakes and must stay in their reptilian forms until they can be reborn and reclaim their true heritage.

The 18-minute “The Ballad of Job Cain”, cut into two 9-minute halves, is a roiling noisy work mixing quite complex percussion rhythms and beats derived from progressive jazz with twisting and tortured guitar drone chords. The atmosphere is intense, burning and malevolent. There’s a bit of throat-singing at the beginning which unfortunately doesn’t appear elsewhere on the album. Gentry Densley’s vocals still can descend very low to subterranean depths; his deep gravelly voice, as slow as the music is serpentine,  matches the vivid horror of the images of the two birds falling, condemned to crawl on the ground on their bellies. This two-parter is a restless beast, flitting from slow to mid-paced, filled with tension and turmoil, mirroring the agonies that the birds feel as they die and are reborn. (Well, one of them anyway as the other is called Cain and can never die – but of his fate, I remain in the dark as the album concentrates on his mortal brother’s destiny.)

“Lorca (Adan)” is a quieter and more measured affair: a sluggish pace and steady pace carry the almost dirge-like music dominated by long scything chords and Densley’s singing. About halfway through the track erupts in fury and there’s an extended instrumental section of controlled though simmering guitar aggression. The track segues into “Snake Hymn” through a cloud of searing hot guitar feedback noise; this is a major highlight of the album, very distorted in sound and featuring some incredible volume dynamics as the music dives into the quietest of quiet moments only to break out in a loud crash of abrasive guitar crunch and solid sub-bass riffing. Past the halfway mark, the track gets very chuggy with drums providing the driving force that energises Densley’s guitar-playing which sends out forceful flashes of guitar tone and melody.

We’re well and truly in the realms of snake mythology and symbolism by now, epitomised by “Horn-Snake-Horn”, a slow-burning piece on the mystical connections among snakes, fertility and renewal. Track 6 picks up the renewal theme and extends it into a legend of death and regeneration in which the mighty horned serpent heroically gives up its body to become mountains, landscapes, trees and ultimately birds. The epilogue in which he returns to life is celebratory for the most part but still has a dark mood. The bird has atoned for his past arrogance and presumption, and has sacrificed himself for the betterment of his fellow creatures and environment (this means he created of himself the Garden of Eden – what a hoot!); but it seems still that he has hard lessons to learn as a new path stretches before him – and what has happened to his brother in the meantime?

Most tracks are quite long and very busy, and sitting through the album in one hit, even though it’s actually less than an hour long, can be quite exhausting. It is truly an assault on the ears with complex jazz-influenced percussion rhythms and writhing guitar riffs and chords. The standard of playing and the level of consistency are very high; there is not one moment here that is wasted or should be edited for length. Eagle Twin have delivered an excellent album inspired by a strong, vivid and unusual concept redolent of Old Testament Bible absolutism, desert despair, snake symbolism and redemption through self-sacrifice. Aspiring young musicians, take note: all the technical prowess you can muster is as nothing if you don’t have a good theme or subject that can push you to creative and energetic heights.

I only wish – and here my gripes are my own personal preferences – that there was more throat-singing, that sometimes the music could be a bit cold to bring out the transformed birds’ new reptilian behaviour and nature, and that the album could blow out intensely hot and dry desert atmosphere along with cold, sliding leathery scales.