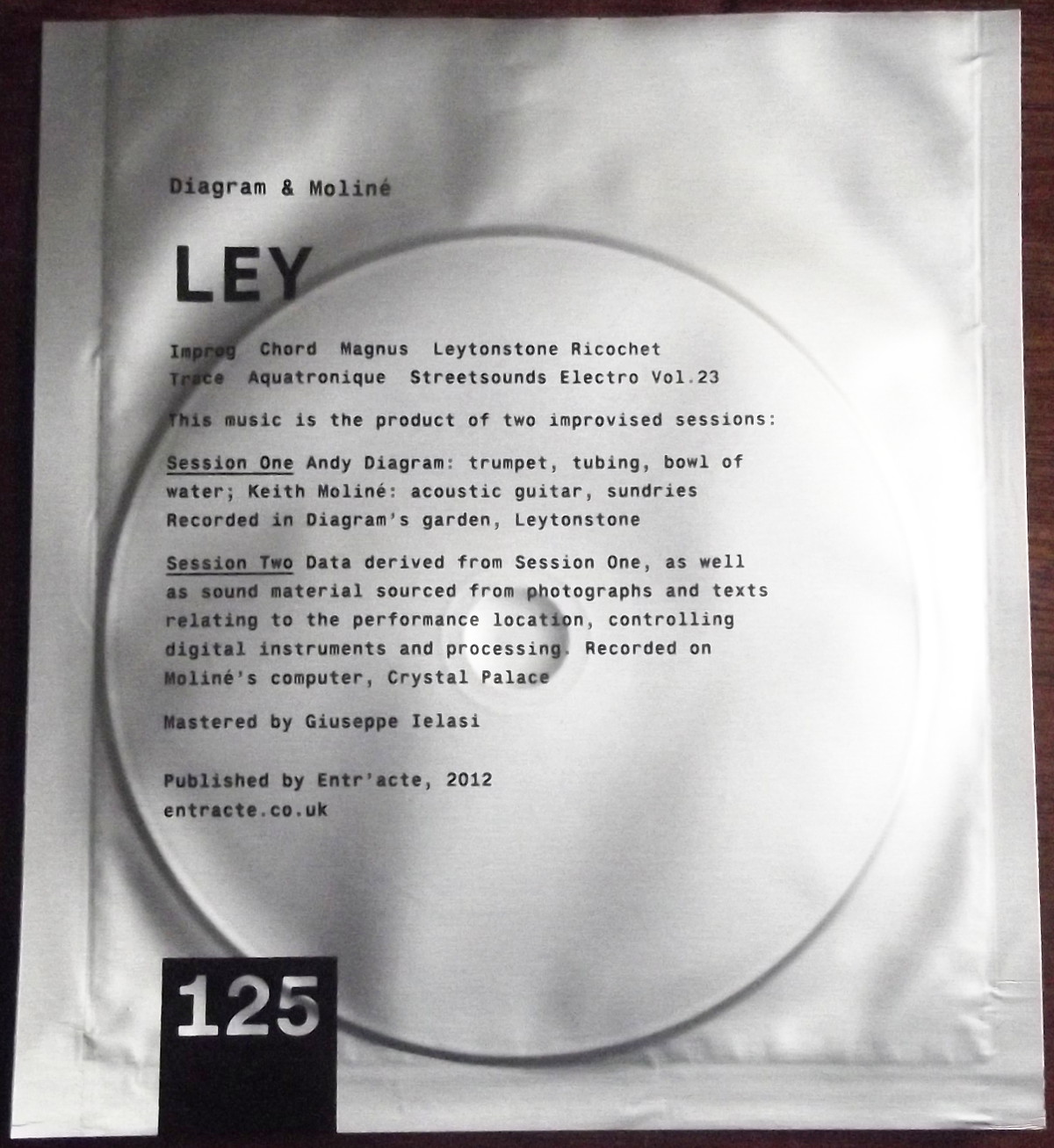 Last heard from Parisian-based electroacoustic musician Éric Cordier in 2009, with a batch of items from his own Prêle Records label. Here he is with a mini-CD La Cité Du Bruit (UNIVERSINTERNATIONAL UI-CD016) which arrived here 1st March 2012. In about 18 minutes, Cordier proposes an aural comparison between the sound of jet engines of fighter-bomber aircraft, and the sounds made by small river insects. He calls it a “confrontation” rather than a comparison. I for one would welcome a set-to between these roaring instruments of death and the harmless benign winged ones of the Loire, so that we could finally settle this long vendetta once and for all. However being of a technical nature, Cordier is more interested in the contrasts between large and small sounds, between loud mechanical noise and gentle organic whirring. In any case this binary approach to the matter leaves out the third element in these recordings, which is something to do with microphones going wrong – at any rate the discharging of electrons inside a condenser microphone, an event so microscopic I wonder if it can even be said to have occurred at all. Apparently it did though, and this CD contains the hard evidence. In case any listeners were hoping for a miniaturised version of powerhouse noise in art-music form, I may need to point out that this work is rather quiet and restrained, despite containing the word “Bruit” in the title and featuring the said Chasseurs Bombardiers and arriving with a Futurist-styled cover image highly redolent of noise, speed and power. Our listening interest derives from Cordier’s ingenious editing skills. The word “seamless” comes to mind when faced with these subtle collisions of unrelated sounds – in fact it’s almost like he’s melting the edits together like a glassblower with an acetylene torch. Presumably computer software makes this kind of smooth edit eminently possible, compared with the old days when musicians had to splice their magnetic tapes together by hand with a razor blade and a roll of tape. As he tottered around the cafés of the 8th arrondissement, Pierre Schaeffer frequently used to declare you weren’t worth beans as a musician until all your fingertips were raw and bloody 1. Now the worst dangers a musician faces are RSI, WRULD, eyestrain or backache.

On Ley (ENTR’ACTE E125), we hear the team-up of trumpeter Andy Diagram and Keith Moliné. The album is a stitched-together jumble bag of rags and oddments, and has a foreboding complexity and denseness you wouldn’t believe. They started with recordings of their own improvisations performed with trumpet and guitar (and tubes, bowls of water and other miscellaneous items) which were pretty idiosyncratic to begin with – they did it in the back garden with no amplification, and tried to enact that form of disconnect that is so valuable to creators, to get away from self-consciously “creating art” or evade the over-familiar patterns of playing. Then the recordings were subjected to further malarkey from programs running on Moliné’s computer. Along with the original recording data, he threw some “wild” data into the mix, apparently derived from digital image files and text files. This practice, by which I mean the repurposing of JPEGS, TXT and other non-audio file formats into something which an audio editing suite can process or play, seems to be cropping up quite a few times lately, so maybe it’s starting to enter the lingua franca of experimental music. On Ley, the process may not be directly used to generate sounds, but it has been used to trigger certain digital instruments and contribute to the overall process. This has resulted in a listening experience that is extremely chaotic and unpredictable. I do like the fact that Moliné’s method has blurred the edges almost completely between real-time improvising and post-hoc computer mayhem, and there are sound events taking place in the fabric of this music that are almost shockingly unfamiliar and strange. At the same time, I’m hard pushed to find any logical train of thought in these compositions; it’s as if the “wild” elements have taken over for 90% of the time, and the computer’s errant patterns of behaviour are guiding everything, making sonic mincemeat of the material. Put a madman behind the wheel of a very fast big truck, and wait for the fun to start. With this two-pronged approach to randomness, this pair are certainly trying to take aleatory composition to a new level, even at the expense of creating a rather indigestible music.

Another refreshing album of solid instrumental music on the Hubro label, this one from Ballrogg with their Cabin Music (HUBRO HUBROCD2515). The duo of Klaus Holm and Roger Arntzen (woodwinds and double bass, respectively) started out with a mission to render the music of Eric Dolphy in a more minimal, pared-down way, positing an alternative history where that lively free-jazz hooter had somehow come under the influence of Morton Feldman instead of Ornette Coleman 2. Ballrogg’s project then is to rethink jazz as “subdued chamber music”, and their efforts are recorded in crystal clarity across four long instrumental tracks here. On this outing they are joined by the guitarist Ivar Grydeland with his banjo and acoustic guitar, but also his pedal steel guitar which adds mournful and plangent notes to the already melancholic, wistful music. I like most of the album and only ‘Breakfast Music’ misfires, with its tasteful chords shading into easy-listening modes and producing music that more resembles Stan Getz with Kenny Burrell than Dolphy with Mal Waldron. For the most part though, this is a studied and focussed exploration of long saxophone / clarinet tones and precise, skeletal bass plucks, with entrancing results. Look out for Grydeland’s solo album on this label as well.

French musician eRikm has always been welcome here with his imaginative and bold use of the turntable in improvising situations (even though he mostly does it with a CD player these days). I was impressed to find on Transfall (ROOM 40 RM449) he’s now expanding his visions into something which could be termed a species of contemporary classical composition – at least the first track, 21 minutes of ‘Austral’, fits such a profile and was performed under his direction by Ensemble Laborintus. Two players from that group, notably the harpist Hélène Breschand and the clarinettist Sylvain Kassap are familiar to us from their work with Franck Vigroux, and indeed have made at least one duo record for his label; while the Ensemble as a whole has tackled the music of Stockhausen, Luc Ferrari, and François Rossé. ‘Austral’ has some surface connections to 20th-century composition with its generally atonal approach, crazy percussion and wild twists of compositional logic, but I’d like to think there’s also an improvisatory element happening somewhere in the midst of its open-ended structure. Is it just a coincidence that the title is very close to Cage’s ‘Etudes Australes’? Remainder of the CD is I think mostly eRikm’s solo electronic and electro-acoustic music, including the foreboding shades and textures of ‘Batfox Park’, or the ferocious alien insanity and menacing near-silent hisses of ‘Klein Surface’ – both of which are laced with the toughness and sullen attitude which this man has made into one of his trademarks. There’s also ‘Pavlova’ which incorporates some piano music supplied by Frédéric Blondy to produce a very sombre tone painting in multiple shades of black, using backwards-tapes, layering and digital judder in a fascinating update on more “traditional” musique concrète methods. Arrived 5th March 2012 and also available as a download.