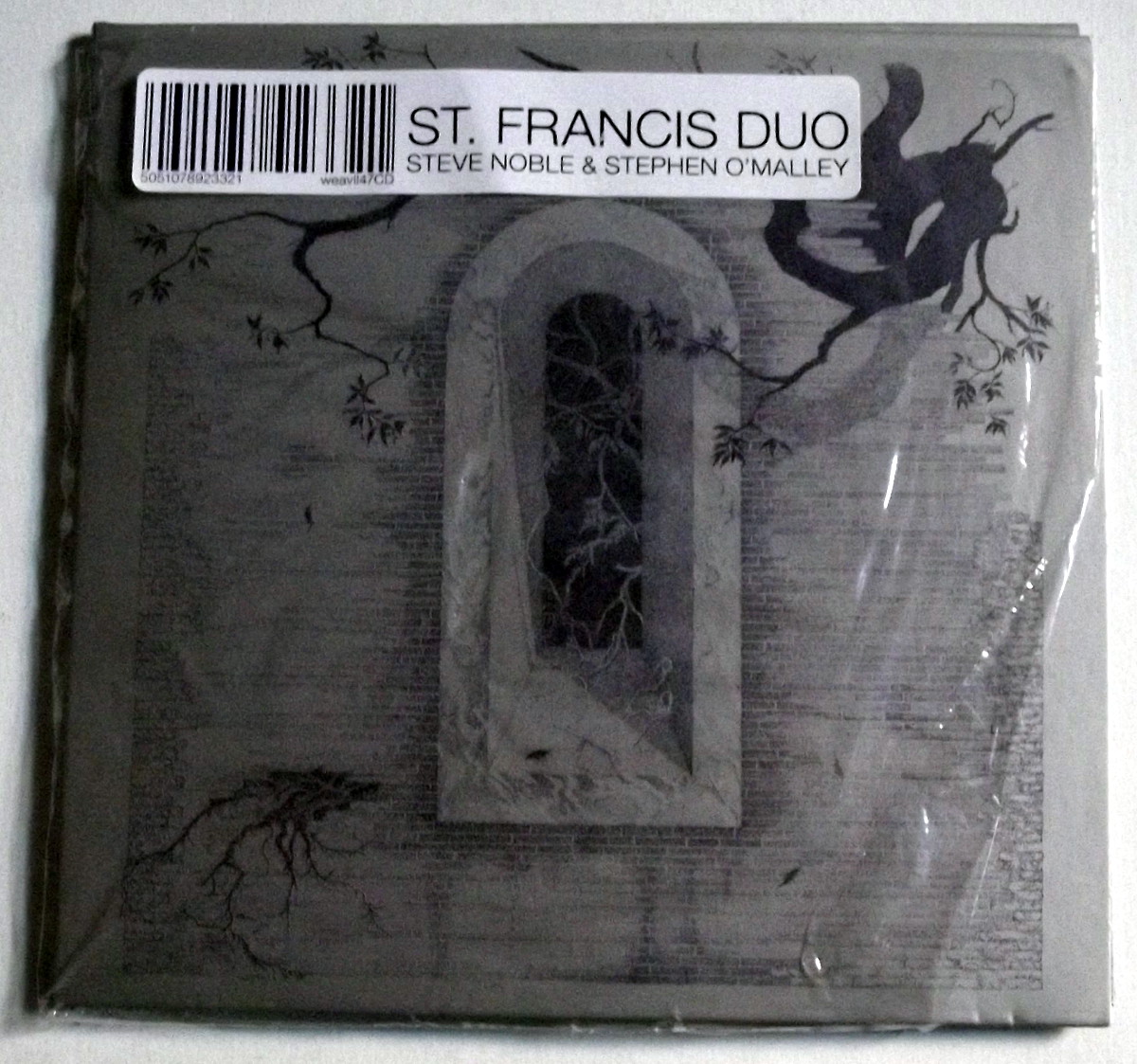 A thrilling barrage of thunderous drums heralds the arrival of this collaboration by two members of the Aethenor project Steve Noble and Stephen O’Malley, and it’s a mighty meeting of psychedelic rock, free jazz, free noise and abstract improv. The recordings on this album were recorded live at Cafe OTO in London over 18 – 19 August 2010. The two musicians could have tried to blast each other off the stage with either heavy tribalistic drumming or long sonorous subterranean guitar drones but instead choose to rampage together through quite dark psych / noise / improv territory in a way that reminds me of Keiji Haino’s work with Fushitsusha but without that man’s vocal gymnastics. The result can be very intense and deep, and O’Malley at least reveals unexpected skill and ability in conjuring up many different and subtle moods with his guitar; as for Noble, I’m not familiar with what he’s done over the past 30 years but here he really immerses himself in collaborating with O’Malley with exuberant, energetic and sustained drumming.

The album tends to be more of a showcase of Noble’s percussion talent than of O’Malley’s work, though the guitarist is very busy throughout the recordings: it’s just that O’Malley chooses to scrabble away on the strings with wild chords and shredded riffing, and shadows Noble’s playing as a foil. The Sunn0))) man has certainly learned a lot about playing heavy moody psychedelic guitar with the Sensei of the Dark Sunglasses. Although all of the music here is unpredictable and often fiery, the first track seems more consistently unpredictable and volatile than the others which have some very long quiet passages. Compared to track 1, track 2 is more restrained and slow-burning at times but is no less energetic and lively. In later tracks  the duo appear to find themselves trapped in too-quiet trance passages when they should just let the music surge forth like powerful death rays but there is no denying that they enjoy playing together and are totally absorbed in the moment.

I’d very much like to see Noble and SOMA continue together as a duo and see how far they can take their brand of free noise improv / psych rock / jazz. One might assume purely on the basis of their past experiences together and separately that they might invite guest musicians (Haino as DJ on synthesisers comes to mind) to perform with them on future outings but it might be an idea for them both to keep performing live and in the studio just as a pair (allowing for some inspiration from others) just to see how far they can go.