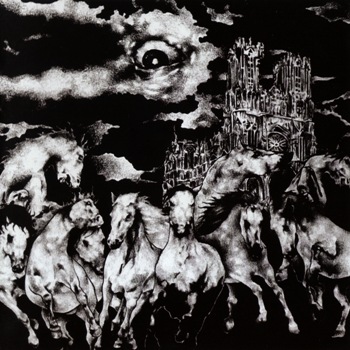 Album No 3 from one-man black metal Finnish band Dodkvlt who I’d never heard of until just a month ago, “III: Domini Ascensionem” is a solid and brutal work that deserves to be brought to a wider audience, and might just be the break-through that Dodkvlt needs. The first track “Dark Void Architect” is a 12-minute opus that sums up the band’s style: it’s at once full-on heavy and aggressive, dense and raw in style and sound, grim and relentless in attitude, and apt to fly off at unexpected musical tangents. Even the opening bars of the song are unusual: they’re stately (synth) chamber music string work worthy of a Baroque concerto and through several passages in the song you can hear this orchestral loop repeat in the background. The rhythm and pace of the track swing from strong driving riffs to black metal storm blasts of fury to suddenly quiet passages of delicate solo piano melody. There’s some melodic hard rock in parts and some super-technical black metal riffing in others. All of this is laid over by incredibly demonic croaky vocals.

The rest of the album doesn’t quite reach the versatility of the opener if the songs are taken individually but they do boast some unexpected and interesting surprises. “A Curse upon this Wretched World” is very headbangingly groovy yet also features some unusual rhythms in parts and even a bit of sparkly space ambience that’s easily missed if you sneeze at the wrong time. As if to confuse listeners, the Dodkvlt man Lord Theynian brings back that orchestral loop from Track 1 into the dense structure. “As I Descend into the Bottomless Void” is fierce and uncompromising in its attack though it also has sections where the music appears to float in a huge empty cavern where there are no inhabitants and blackness is everywhere. About the ninth minute there’s an unexpected turn into post-metal rock bordering on lounge pop that very few bands would have thought of doing: Caina springs to mind as one of those bands not afraid to dip their toes into occasional easy-listening pop fluff.

It’s hard to keep up with the music as it changes a lot and there are no pauses between tracks so the album ends up sounding like a continuous hour-long drama with six varied if sometimes confusing movements. Suffice to say though that for an album that features a lot of improvised music, Lord Theynian’s ability to sustain the aggression and furious attitude through the entire recording and several episodes of melodic acoustic guitar, post-metal, classic strummed black metal, orchestral music loops, quiet solo piano interludes and the odd episode of space ambient is a marvel in consistency.

The album is best heard as one whole: there’s so much variety thrown at listeners nearly all at once though, and that can be a weakness in that the music might pass as a blur over many people’s heads and won’t get the appreciation it deserves. Probably the most important thing about this album is one that a lot of listeners won’t be aware of while they’re listening to it, and that’s the skill and restraint Lord Theynian has applied to structuring the music here: with so many different genres he can command, he’s arranged everything so every style of music can be heard clearly and there’s no overkill on any one style. The result is an album of varied music done in good taste and with respect for the different elements. Everything serves a purpose here. I sort of wish that the good lord had applied the same approach to his subject matter and his lyrics as they’re not that much out of the ordinary for black metal but that’s perhaps a minor point.