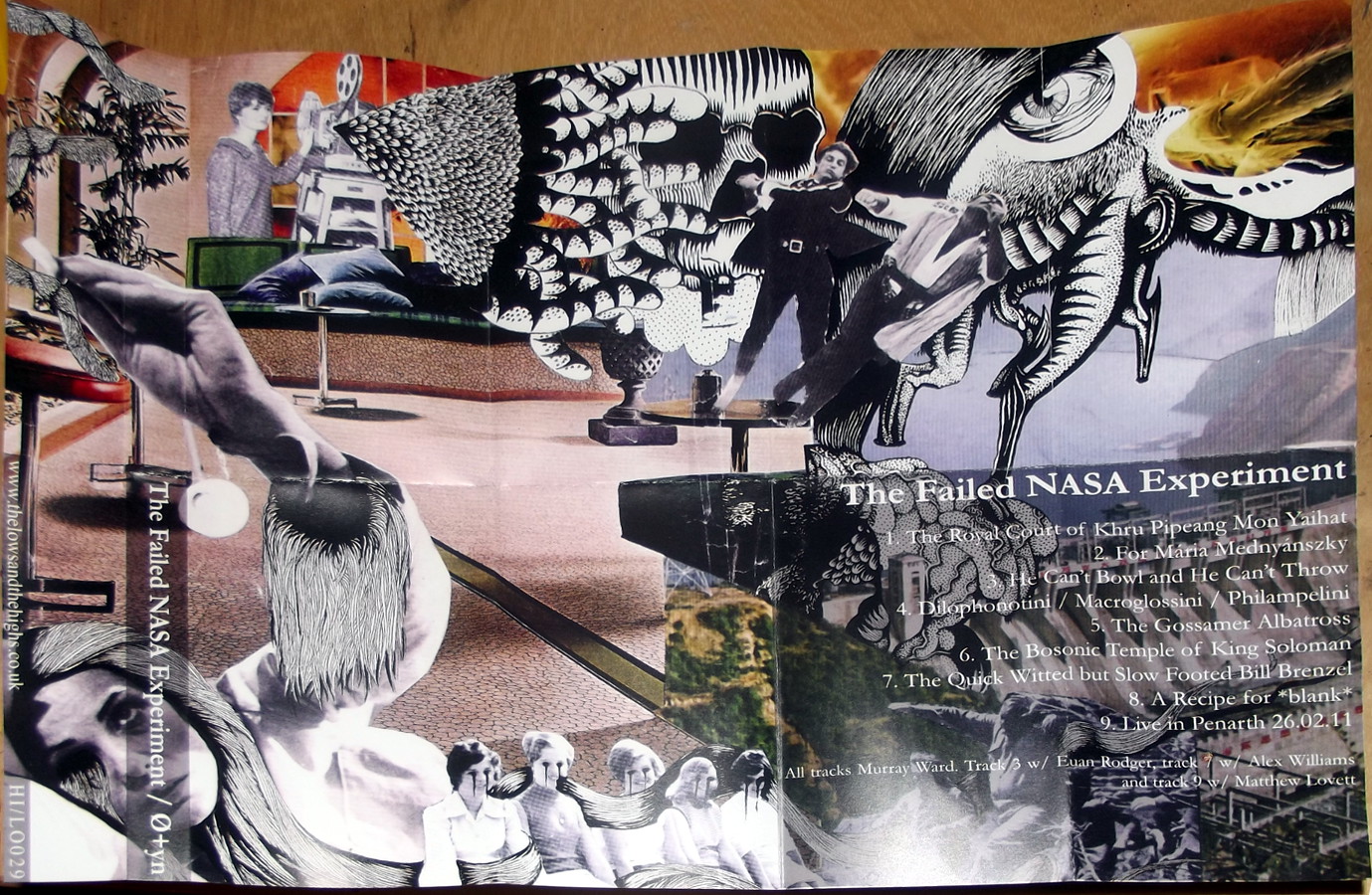 Subterraneanact is the duo of Henk Bakker and Jelmer Cnossen, and their debut Subterraneanact (Z6 RECORDS Z6399699) is an unusual piece of studio assemblage created in Rotterdam. The album is a distillation of recordings made in the studio. The recordings have been edited, mixed and remixed; then subjected to further sampling, remixing, and rebuilding processes. At all times the duo were working to their own private sets of compositional and improvisational rules; the aim seems to have been to transform the sounds of their respective instruments as far as possible, resulting in an “atmospheric and expressive sound environment”. Considering the source material was mostly acoustic, i.e. clarinet and drums, it’s a truly extreme example of what intensive reprocessing can do to taped sound. You’d be forgiven for thinking it’s a purely electronic album on the surface, although there are printed credits for live electronics and sampling using the “Ableton” device. Despite the wild, crazy and sometimes ugly remanipulations of sound, the original clarinets and drums continually show their growly, thumpy faces at various portions in the entertainment, surfacing like live deep-sea fish in a well-cooked bouillabaisse, and about as welcome. The clarinettist Bakker studied his instrument in Utrecht some 20 years ago, has an interesting history of performing, composing and doing radio, and is now associated with WORM in Rotterdam. Cnossen the drummer (also known as Malorix and JC) has drummed in a variety of bands and, of the two, seems more conversant with the sound-recycling process represented here – most of his Malorix work is executed through his personal take on the laptop-plunderphonic-meltdown approach, utilising discarded music from old compact discs and tapes. The screen-printed cover unfolds into an unsettling perspective of an impossible iron tower being built under the earth’s crust, gradually poking its long neck out through a mineshaft opening. This image emphasises the “constructed” nature of the music, but also its sheer impossibility – what we hear sometimes defies rational thought. It’s not that it works by juxtaposition of shocking sounds, but by a form of reworking that feels almost manual when you listen to it. The composers are kneading dough and working plasticine between their fingers. A very hand-knitted and cottage-industry approach to electro-acoustic, resulting in loud, primitive and lumpy musical forms. Arrived 13 April 2012.

Subterraneanact create a “virtual” underground space through their studio work. We could say that the American death-metal industrial project T.O.M.B. take things one stage further on UAG (CRUCIAL BLAST RECORDS CBR94), by putting themselves physically into bleak and hostile environments to realise their music. The basic tracks were recorded in assorted locales of horror – abandoned sanatoriums, asylums, morgues, and deserted crypts. It seems they did everything but lock themselves in a cemetery in pursuit of their art. Granted, the music has been reworked in a studio after the fact, but it’s the recording in that selected psychic zone that adds the extra dimension of sheer black terror. Once inside their chosen sanctum, T.O.M.B. would play back their tapes and field recordings at loud volumes to allow reverberant shocks to vibrate from the cold walls, and progress the ritual through drumming exercises, often hammering on the very walls themselves. UAG, an acronym for Uncovered Ancient Gateways, thus assumes the proportions of performance art, as though the CD were a document of unholy and extremely morbid rites; the theme is extended visually in the enclosed booklet of monochrome photos, providing absurdly dramatic reimaginings of these lugubrious seances. Their track titles make multiple references to the grim delights of the “bone orchard”, spicing things up with snippets of witchcraft, bloodletting, moon worship, and various invented ritualistic procedures; and the whole package is topped off with that lurid green-tinted cover art with its fearful symmetry, its runic letters, its hints of sado-masochistic costume, and inverted liturgies. But sonically, this is all quite some way from conventional black metal or industrial death music, and T.O.M.B. (whose name unpacks into Total Occultic Mechanical Blasphemy) serve up strangely compelling and powerful atmospheres on this album, eschewing anything to do with song form in favour of continual tones of abstract oppressive noise, underpinned by frenzied and horrifying drumming. While undoubtedly satisfying to bloodthirsty fans of the respective genres it inhabits, this grisly and claustrophobic record works equally well as extreme experimental noise. Was released in January 2012, I think we may have got our copy in April.

The Senors of Seek

Sent to us by Murray Ward of Cardiff is a splendid split cassette (HI/LO029) by The Failed NASA Experiment and Ø+yn, and it’s released on a terrific micro-label called The Lows and The Highs Records. Their website contains further oddities which look worthy of investigation also. The Failed NASA Experiment turns out to be Murray Ward himself playing solo music with occasional help from Euan Rodger, Alex Williams and Matthew Lovett. Mysterious electronic tones, clattering percussion and random noise bursts, plus extremely heavy psychedelic drones and circular riffs, where the amplified distortion and sense of relentless forward-chugging motion has prompted comparisons with the Faust of the 1970s. TFNE presents a delirious and acid-fried experience, with many puzzling moments inserted into and between the tracks, and concluding the suite with a pastoral acoustic guitar riff that almost makes this tape a lo-fi update on any given Pink Floyd album. The track titles are lyrical and beautiful. This music has the refreshing Celtic tang of well-crafted Welsh magic, enacted by drawing chalk markings on the floor of black-timbered chapels in the hillside.

Ø+yn are an Argentinean five-piece of underground noisemakers, with Cinco Cantos a la Virgen de Satrostramocha on their side of the split. Superficially they may seem to be questing after the same hallucinatory and revelatory states as Mr Ward and his chums, but they pursue their quarry in a much more mysterious way. It’s an offbeat and delirious form of trancey acoustic drone-folk, featuring violins, guitars, percussion and whiney solo lines made with a nasal chanting and wailing voice or equally nasal wind instruments of some sort; many non-western harmonic scales and modes emerge from the improvisations, and at times the music could almost be mistaken for an ethnic oddity from the Folkways catalogue. In some ways this might be seen as a variant of the sort of loopy thing the Finns used to do so well, except Ø+yn are nowhere near so cluttered musically nor (thankfully) as eccentric in the vocal department. Instead, the instrumentation is pared to bone, the recordings are intimate and private, and even the trance-rhythm patterns are rough-hewn and occasionally wobble off the path like a less sure-footed mountain goat. The team may have cinematic aspirations, building their albums in line with the logic of a Jodorowsky film, and even sample a snippet from a Roman Polanski movie for one track. The excellent artworks are collages by Murray Ward, with overlay drawings by Ian Watson. Quite delightful all round; many thanks to Murray for sending this.