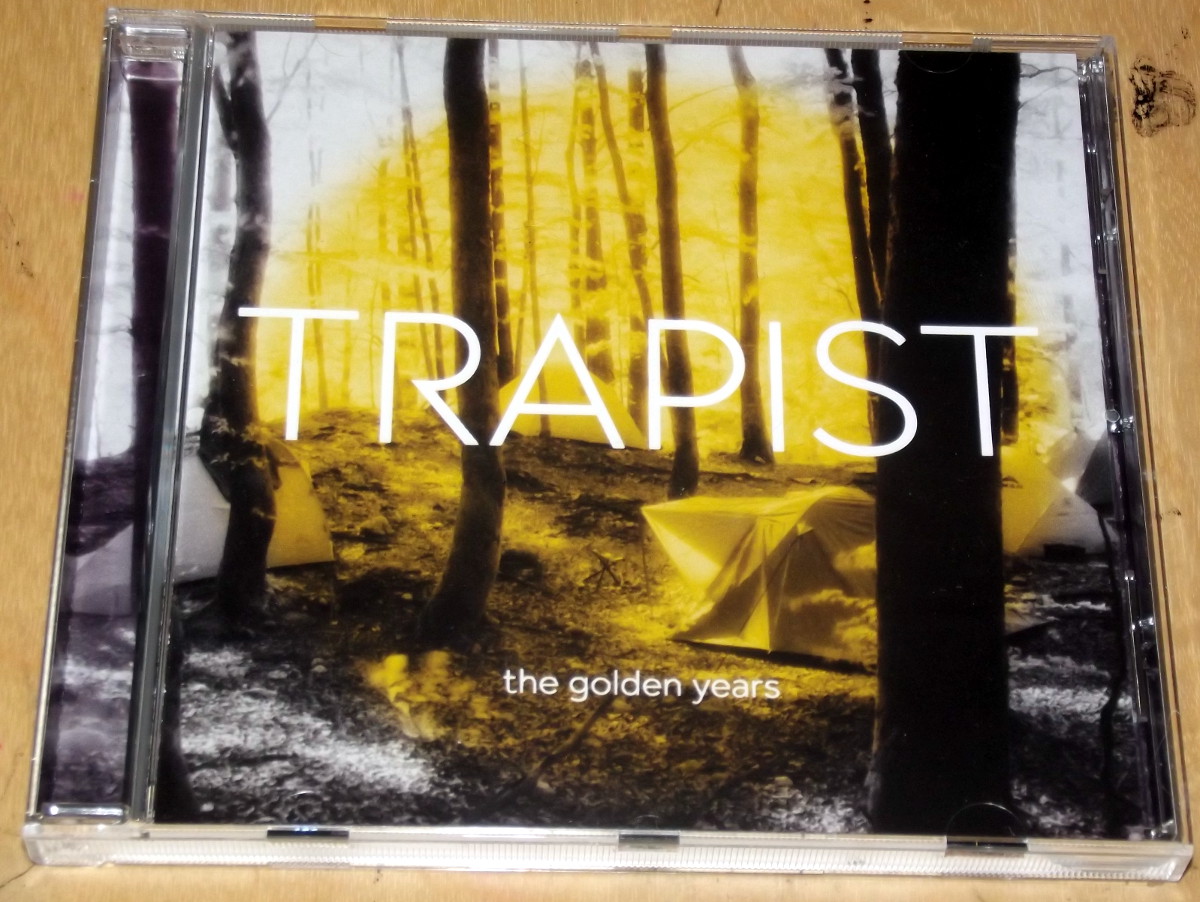 Nice modern instrumental music from Trapist on The Golden Years (STAUBGOLD DIGITAL 19). This is the Vienna-based trio of Martin Siewert, Martin Brandlmayr and Joe Williamson, on the face of it comprising a guitar and piano jazz trio of the sort that Blue Note Records would not have kicked out of the studio in the mid 1950s. But in sooth what we hear would have caused the sacred eyebrows of Kenny Burrell and Joe Pass to knit together in consternation, for nowhere do we hear performed music with the taut energetic punch of post-bop modal playing. Instead the entire threesome move as though they’ve been dipped liberally in a tin of Tate & Lyle’s finest, which is probably why percussionist Brandlmayr is nicknamed “the man with the golden arm” [1. This joke comes from an old episode of Beyond Our Ken.]. The sound is also very contemporary: the guitar has sometimes been treated with live electronics, there is evidence of skilled production technique on the record from its engineers Christoph Amann and Siewert, and the eminently eclectic musicians are informed by a huge range of musical styles, including touches of light glitchy noise that occasionally roars its way into the fold like models of small wolves entering the parlour full of sheep, and there are uncertain tone clusters produced by bowed strings and bowed percussion which float like evil Darmstadtian clouds over the planned pastoral picnic. With ‘The Gun That’s Hanging on the Kitchen Wall’, Siewert allows delicious and even tasteful chords to strum their way across the canvas of slow-moving ominous narrative, and through its deliberately leaden pace and title I cannot help but think of this as a missing track from the 2005 Earth LP Hex [2. Or Printing in The Infernal Method, SOUTHERN LORD SUNN48.]. ‘The Spoke and The Horse’ likewise seems to pick up the vaguely-suggested “wild west” theme, although if this trio were producing a seminar on that subject, I would expect fleeting images from a John Ford movie to flicker across the presentation in a washed-out, subliminal manner. ‘Pisa’ is the one live track in the otherwise studio-bound album, and it concludes with ‘Walk These Hills Lightly’, where the trio push their already-subtle approach into an even more diffuse zone of unobtruseiveness. Here the bass strings and the guitar strings could be said to be sketching out the construction lines for the skeleton of a tune, perhaps with the expectation that the listener complete the tune, or simply enjoy its uncompleted state. These Austrian mellow-mites have been producing this extremely stripped-down form of semi-melodic quasi-structured improvisation for many years now; Siewert and Brandlmayr we remember from their 2003 release for Erstwhile, but they’ve been going for longer than that.

Subtlety is also a keyword to bring into the classroom as we approach Scènes (EMPREINTES DIGITALES IMED 11111) by Pete Stollery, an electro-acoustic composer who studied under the great Jonty Harrison and is now a Professor at the University of Aberdeen, where he is a strong advocate for new music in Scotland via the agency of InvisiblEARts. Since Radiophonic Music is never out of fashion, readers may initially be drawn to the six minute track ‘Serendipities and Synchronicities’, which was composed for a stage play about Delia Derbyshire. In it, Stollery attempts to express his personal affinities with Delia’s work, by refracting it through his own very similar compositional methods. There are also two pieces excerpted from his ongoing Gordon Soundscape project, which is a plan to compile an aural map of Aberdeenshire, through collaging field recordings and processing of same; his chief aim as gazetteer in this instance is to identify and record endangered sounds, such as certain activities found within the dying distillery industry. He also aims to map Paris in like manner, on ‘Scènes, Rendez-Vous’ which has its origins in his childhood memory of a 1967 Claud Lelouch documentary, and uses information from the film as rules to govern his sound-gathering and compositional actions. ‘Fields of Silence’ is also based on field recordings, themed around the intriguing idea that a field of grain falls silent “after it has been harvested”. This very much reminds me of a Ray Bradbury story [3. “The Scythe”, 1943.]. Or that Roald Dahl story where an inventor is able to hear the cries of plants being cut by secaturs [4. “The Sound Machine”, 1949.]. Stollery somehow manages to discover sound events and textures within the mown stubble itself, as well as collaging in “before and after” sound events from combine harvesters. In all Stollery seems to be a thoughtful and gentle composer, one who wouldn’t want to impose anything on the landscape, but rather cares to ask interesting questions about our relationship to our sonic environment. In some cases I find his explanatory notes more interesting than the sounds he produces. This is particularly so with ‘Back to Square One’, where he writes with something approaching passion about the excitement he feels when listening to the “musicality” of sports commentators on the radio and telly, yet very little of that passion or excitement has found its way into the muffled, pedestrian music.

Drums Along the Mohawk

The Hamburg based drummer and percussionist Sven Kacirek has been working steadily producing commissions and compositions since 2001, occasionally finding time to realise his own solo albums in the lucid gaps. Scarlet Pitch Dreams (PINGIPUNG 32) is one of them, released in April 2012. Many of his commissions have, unsurprisingly, been employed for contemporary dance and theatre projects, although on the strength of this album I think he should also look into film soundtracks as another career strand; many of these tracks resemble cues from a suspense drama or a police-procedural TV show shot in grainy blue and silver hues, but there are also lighter and more melodic moments, some of them even slightly humorous in tone. Stylistically, it’s mostly the sound of very clipped piano notes or vibraphone runs picking out the tunes, layered on top of swishy jazz-like beats and cluttered rhythms.

Convolution (TARTARUGA RECORDS TTRCD011) by Max Bondi impressed me in places with its simplicity and stern countenance. We haven’t heard from this fellow since a 2007 team-up with Ala Muerte which came out on Public Guilt, and I can’t seem to find out much else about him at this time. Some of the tracks on Convolution are just very basic electronic drones, with hardly any variations to ease their sullen disposition, and could be characterised by Max’s disciplined refusal to let them develop into anything resembling “ambient” or other pleasurable sensations. Bondi keeps his little pets on a tight leash, and feeds them only on scraps of tofu and raw turnip. For me these murmuring beasts are at their best when situated in the lower register, growling and humming in subsonic manner as if poised for the kill, or else beaming death-rays of hate across the nation. Two tracks which do this very well are ‘Kami’ and ‘Catoptrics’, although ‘Ori’ also has a strong dose of this anti-social poison laced within its broth. However, the last four tracks from ‘Faltung’ onwards follow a different path, and I think these are examples of the sequencer running a pattern through an electronic instrument. These tumbling acrobats are a bit too “bouncy” for me at the moment, but I think at other times in one’s day they would present an interesting monkey-puzzle for the mind to ascend; aye, a plate of sonic macaroni served with epoxy resin instead of grated cheese. Unravel the noodles as ye may. The sleeve art may have something to do with tessellations; it reminds me of an old board game I used to have, where the challenge was to use basic shapes like squares and triangles and form exact pictures of animals, and the only clue they gave us was a silhouette. I expect to puzzle over Bondi’s music in much the same way.