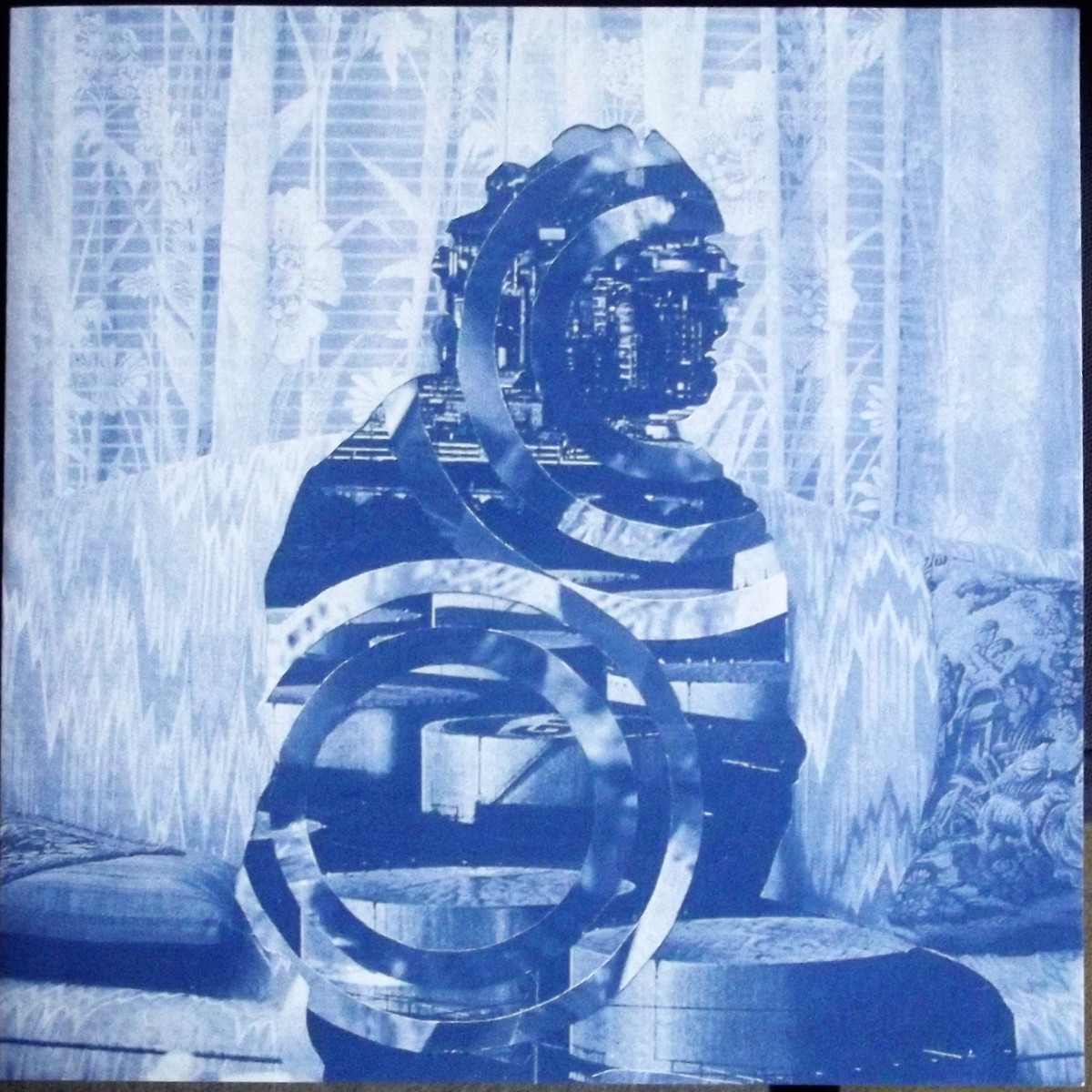 The latest entry in the Vernon & Burns catalogue sees this Glasgow duo teaming up with Lied Music, the duo of Luke Fowler and John W. Fail. Lost Lake (SHADAZZ SHA.11) is one of the stranger and darker emissions from these talented creatives, particularly if you care to compare it with the sometimes more playful assemblages of V&B, or the deliciously offbeat melodic avant-pop tunes created by Fowler as part of Rude Pravo. At first spin the record is a near-bewildering toasted-cheese sandwich, a concoction which contains at least a zillion ideas apparently thrown together any which way. Faced with such an array, discerning avant-LP listeners may want to reach for The Faust Tapes as one touchstone, but another credible precedent is the unearthly Bladder Flask LP 1, that ne plus ultra of cut-up sound art put together by a teenaged Richard Rupenus as if possessed by some fevered desire to surpass the worst excesses of the lunatic fringe end of the United Dairies catalogue. But the Bladder Flask release had the underlying sinister aim of sending all those who heard it mad, through highlighting the complete absurdity and futility of everything. Lost Lake has a more benign mission, thankfully. The album has been very carefully crafted, using sets of recorded improvisation sessions produced by the four players, aiming to resculpt the near-chaos of that source material into a coherent structure. Within that structure, fractured songs and equally fractured stories emerge; yes, a scrambled form of a radio listening or cinematic experience, which is an effect Vernon & Burns have striven for with a good deal of their work (and have produced many items expressly in radiophonic mode). As to the cinematic, Fowler is also a film-maker. There is a logic to this scheme, but it is hard to follow and weaves its way around in a highly secretive and intuitive fashion, like an errant underground stream full of eccentric fish and darting river-insects stained in unnatural colours. We could account for some of this quirkiness by pointing out that all four creators were involved in the refashioning process, rather than a single editorial hand behind the editing knife; one can imagine the clashing dynamism generated by four powerful personalities, each of them bending the path of events in their favour. Additionally, the source material itself was not exactly straightforward music to begin with, but created using the now-virtually-standard set-up of the modern improviser, that is amplified instruments, toys, found tapes, field recordings, and live electronics. From this rich stew, voices and tunes emerge from amid a varispeeded and highly layered humid aggregation of extremely strange sounds. And yes, like the Rupenus LP, it is quite absurdist, but I like to think it’s a fun and cartoony absurdity, rather than bleak and Beckett-like. That said, this aural bric-a-brac crawls out from a dark attic of the mind, and is as much an unsettling listen as it is entertaining. Corin Sworn’s cover art encodes all the above information quite perfectly. Using collage technique (naturally), it depicts a figure sitting on a sofa surrounded by hideously “tasteful” drapes and furnishings. This image of bourgeois normality is thoroughly disrupted by replacing the outline of the figure with fragments of urban horror and machinery, then further scrambling the visual schema with concentric rings and diagonal bars, suggesting the power of the aural emanations on the record. The album is, we are told, a sequel to a 2006 release called Lied Music vs Boy-Band Tax Returns, which we reviewed in our Vinyl Viands issue.

Pedal to the Metal

A promising experiment in steam-driven innovation is the one-sided 12-incher by DJ Mistakes (PHASE! RECORDS PHR-81). The two creators are Casey Farnum and Elliot Hess, who built a complex apparatus allowing them to power their turntables using bicycles; the cover art and the enclosed drawing, as if torn from the pages of the English comic illustrator Rowland Emmett, give some indication of the set-up and its concomitant paraphernalia. These drawings also reminded me of the sketches Hans Reichel used to include on his early FMP albums (e.g. Bonobo Beach), indicating how he assembled his own hand-built guitars. On the record, we actually hear live recordings of the infernal machine, made in Brooklyn in 2006-07 and also using gongs, microphones, a mixing desk, and of course records on the turntables. The artists may be slightly poking fun at the conventions of DJ culture, but also intend to put more spontaneity back into the artform, and they hark backwards to the time of the hand-cranked Victrola, harbouring a certain intellectual nostalgia for an undefined early modern period when “gears and bicycles were the stuff of aural and physical revolutions”. If I were a writer of the Ken Hollings school, no doubt I could bring forward numerous references to the place of the bicycle at key political moments of the Russian revolution, the First World War, or in the films of Eisenstein, thus making ingenious connections across political and cultural history. Farnum and Hess may even be attempting to begin that undertaking with their front cover collage, which although let down by rather murky printing, does suggest a darkened industrial landscape where the bicycle wheel on the horizon resembles part of a mining operation, and the two men in old-fashioned suits have their heads replaced, John Heartfield style, with objects which I assume are bicycle seats. Unfortunately, the record itself doesn’t live up to much of this promise, and is merely odd and amusing where it could be radical and wild. Some unusual moments can be heard, but it is mostly a lot of wobbliness and speed variations, which is pretty much what you’d expect. This arrived around June 2011.

The double LP Atonal Hypermnesia (MEGATON MASS PRDUCTS PIKADON002LP) by French avant-metallists P.H.O.B.O.S. is their third release and arrived here in June 2012. We last noted them in 2009 with their album Anœdipal, and this new release provides an even more remorseless manifestation of their craft. They began life in 2000 using the “conventional” four-piece set up of guitars, bass, drums, keyboards, and vocals, but from the start their driving mission has been to create a degree of sonic intensity that transcends the conventions of the many generic labels that are flung in their direction, including Black Metal, doom, stoner, sludge, noise, industrial, etc. As a matter of fact the principal creators are proud of their “maximal” approach to amplified noise, which while it may use a lot of churning, droning effects is arguably more “eventful” than any given release from the Sunn O))) school of imitators. They also aim to structure their tunes, rather than merely reverberating their Marshalls into infinity. Stefan Thanneur once again provides the cover artworks, but where the Anœdipal record made provocative use of religious icons, the keynote this time is heavy abstraction, a restricted colour range which allows only black (lots of it) and silver, and an allusion in the direction of geological formations, intended to suggest this is music that causes earthquakes or was engendered inside the crater of a volcano. As a listen, it’s very heavy going; treated guitars, much studio fog and choking drone effects, solemn vocal grunts, and relentless hammer-blow drums throughout. In fact I can’t stress enough how inescapable these drum beats are. They strike their way into the very fabric of the music like geologists’ mallets, and serve mainly to illuminate how trapped we are by the cavernous walls of this extreme sound. These drums make the entire sonic environment sound hollow, and start to make me feel hollow inside too. As to the guitar and electronics (if indeed that’s what we hear), they produce endless, clotted clumps of noise, and to endure them is like eating lumps of burnt coal or solidified nuclear waste. Certainly this is very well-crafted music and is quite some way removed from the more primitive end of Black Metal (e.g. Striborg, Bone Awl, and Beherit), and the elaborate titles such as ‘Solar Defrag’ or ‘Necromegalopolis of Coprolites’ point to a strongly intellectual influence on the work, adding additional layers of context to what is already an extremely dense statement.