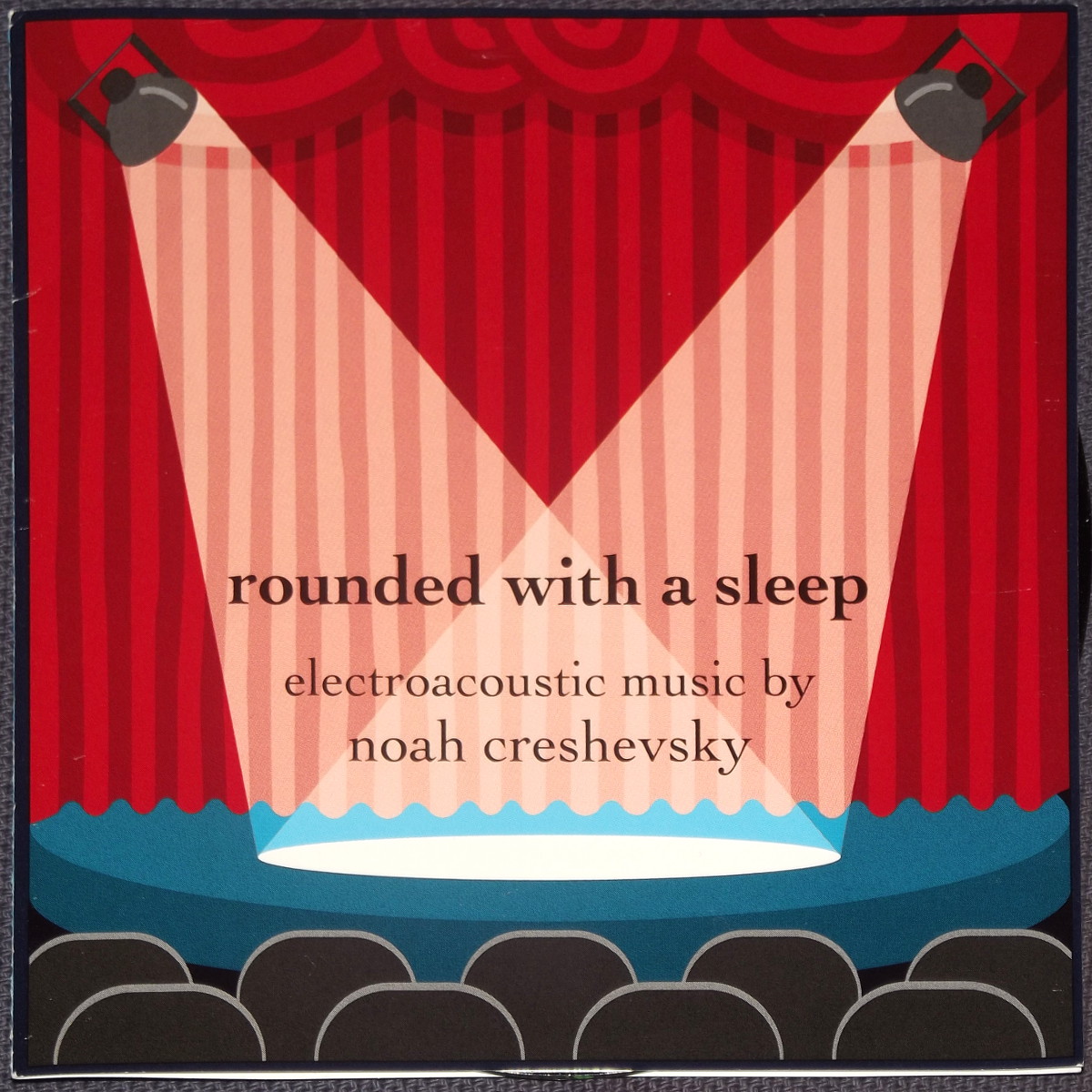 I think we last heard from Noah Creshevsky with his 2010 album Twilight of the Gods, released on the Tzadik label, and there is also the 2008 item Favorite Encores where he teamed up with If, Bwana. Now here he is on Al Margolis’ label Pogus Productions with Rounded With A Sleep (POGUS 21063-2), containing seven recent-ish examples of his dazzling and impressive “hyperrealism” compositions. Creshevsky is a meticulous electro-acoustic maestro who uses an extreme form of editing, cutting and pasting together sounds from multiple sources; on this record, he does it using the recorded performances of numerous musicians, so we have a rich array of musical notes and sounds from clarinet, voices, guitar, banjo, steel guitar, cello, bass, and improvised piano music. Twilight of the Gods went all-out for the wow-factor with its intense and utterly impossible layered compositions, its runs of notes rushing past at ridiculous speeds, and a generally breathless tone throughout most of the album. Rounded With A Sleep feels somewhat more manageable than that tornado, and its keynote to me seems to be an intimate contemporary form of chamber music. This may be simply because there aren’t as many instruments to listen to, but this outlandish composer does not skimp on the “can such things be?” factor, presenting us with a lavish feast of layered, cropped, varispeeded and intricately assembled musical phrases, the like of which hasn’t really been heard since Frank Zappa overworked the Apostolic Studios board on the Uncle Meat album in 1968. This is particularly evident on the clarinet and keyboard interplay on ‘La Sonnambula’, and the astonishing recastings made out of Stuart Isacoff’s piano work on ‘What If’, which is like a surrealistic walkthrough the history of classical European keyboard music. If I knew more about the field, I might be able to identify resonances with Bach, Mozart and Haydn with more confidence, but as it is I can only effuse my vague ill-informed impressions. I’m on slightly safer ground with the guitar-based piece ‘The Kindness of Strangers’, which offers us a virtual trio of guitar, bass, lap steel and banjo players, refashioned in the studio to create an utterly mangled form of anguloid country and western music, where not even the singing voice is spared the full Creshevsky treatment. One is usually left somewhat exhausted by listening to only ten minutes of this dense music, but it is clear Creshevsky is not simply out to surprise or stun the listener with a zillion cultural references and juxtapositions in the manner of many plunderphonics artists over the last 20 years. On the contrary, he aims to advance music. His sleeve notes here offer a robust critique of the norms of classical music performance, highlighting the “bad economics” of paying “good wages to a live performer who merely sings a 10-second coda at the end of a string quartet”. Creshevsky’s hyperrealism, and by extension any music that has been collaged in a studio through judicious selection of the best performances 1, offers a viable alternative to that old 19th century concert-hall based model. However the composer is not out to completely junk the past, and he is driven by traditional musical values of virtuosity, sonic palettes, and the production of an expressive musical language. His edits produce a form of super-virtuosity from the work of the already highly-capable musicians he works with. If his music seems exaggerated to us, it’s because he feels he also has to compete with the excesses of the information age, where we have been exposed to so much culture that he fears the power of music may be diminished. Creshevsky’s response to the situation is far from pessimistic; he devotes himself to creating energised and uplifting music, that truly refreshes the sensory passages. From 17 February 2012.

The American composer John Bischoff studied with Robert Ashley at Mills, and was also a member of the League of Automatic Music Composers. The latter team of experimenters made use of early (late 1970s-early 1980s) computer technology to generate random electronic music in endearingly home-made ways. On Audio Combine (NEW WORLD RECORDS 80727-2), we hear five of his more recent works dating from 2004 to 2011, which are broadly related in their use of physical objects or instruments being employed to trigger electronic sounds. There are subtle variations to do with the use of amplification, timing patterns, and attempts to subvert or re-order the original time sequences by ingenious methods. Most of this very process-heavy music seemed uneventful to me, but I enjoyed parts of ‘Sidewalk Chatter’ which was made using the STEIM crackle box 2 and effectively documents some sort of interactive hands-on dialogue between the performer and a computer, via the exposed metal circuits of the box. ‘Surface Effect’ is also sporadically exciting and works on similar principles, that is the interaction between a trigger device and a computer program, but this piece makes more extensive use of pre-planned random structures and allows, in a control-freak sort of way, the oscillators to create unpredictable patterns. A complex form of a detuned and unstable synthesiser, if you will, which benefits from being entirely hand-made by Bischoff. From 20 February 2012.

Trophies is the oddball project of the Italian composer Alessandro Bosetti, a vehicle for his complex prose-poem concoctions which he intones rather emotionlessly on top of a free-form musical structure provided by the drummer Ches Smith and the guitarist Kenta Nagai. Bosetii also adds uncertain electronic tones, colours and washes, and Nagai’s guitar is fretless, meaning he is able to make music while avoiding constructing familiar riffs or tunes. These strategies add to the deliberately obtuse contours of the sound and the open-ended nature of the compositions, producing sensations in the listener that are very hard to explain. Six examples of this perplexing music can be heard on A Color Photo Of The Horse (D.S. AL CODA #4), all recorded in Brooklyn in a single day in 2010 under the production guidance of Alex Waterman. Trophies music is always a bit daunting and overwhelming to listen to. For starters, the music is half-familiar, half-unfamiliar; at times it almost resembles a form of dissonant experimental jazz-minimalism performed without any sort of underpinning rhythm or pattern, and at other times proceeds with the urgency of a tricky Trey Gunn riff from a latter incarnation of King Crimson. Mostly, it is dissonant and unpredictable, wriggling about the turf like a structural-materialist centipede. Then there’s the equally tricky lyrical content, a jumbled explosion of prose verbosity which may sometimes repeat certain phrases, and which occupies some halfway mark between Samuel Beckett and Lenny Bruce. As soon as I think I stand on the verge of grasping the meaning of these breathless texts, they almost instantly collapse back into a sea of absurdity and gibberish. The situation is not helped by Bosetti’s studied ambiguity as he performs his half-musical recits, at times almost parodying the emotional dramas of a soul singer or operatic diva, but mostly rattling through his forests of words with the speed and efficiency of a human typewriter. True meanings are masked in this post-modern diatribe. Make no mistake, this is a truly fine art piece of business – conceptual art trammelled up with music in ways that make Laurie Anderson sound like pop music. In some ways this could be the closest we’ll get to hearing a Raymond Pettibon drawing in sound. This release is one of numerous oddities, including some DVDs, we received from this inscrutable art label in January 2012. All of them are packed in sleeves which cannot be unfolded.