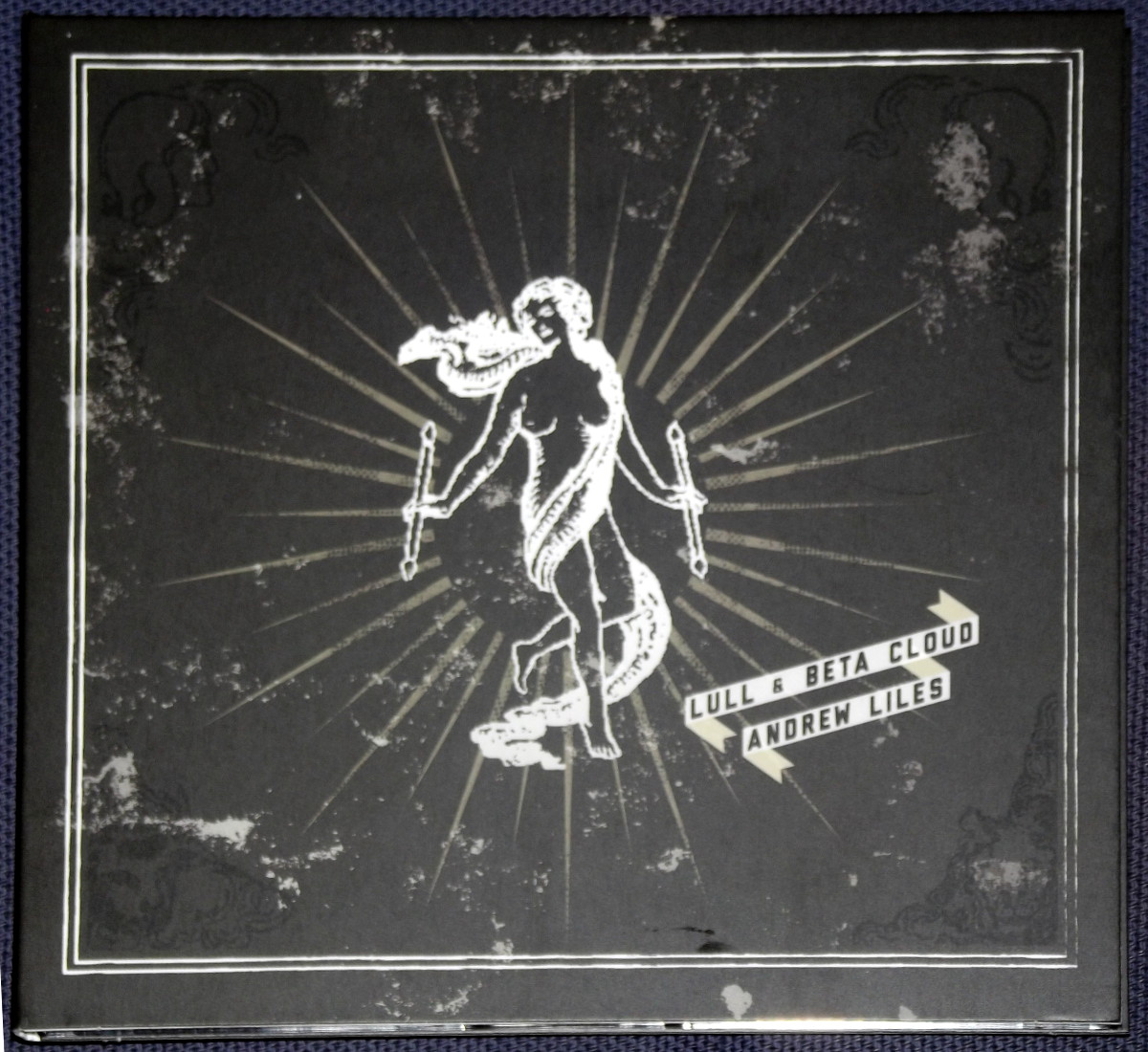 Here’s a highlight from February 2012, Age Of Energy (NORTHERN SPY NSCD020) by Chicago Underground Duo – a glorious CD of electronics, jazz cornet, and solid rhythms. No upstarts are Chad Taylor and Rob Mazurek, who have in fact been playing together in various manifestations since the late 1990s, and in turn grew out of a renaissance of improvised music in Chicago which had been burgeoning since about 1990. They’ve had a lot of records released on Delmark and Thrill Jockey (this is their first for Northern Spy) and as this is the first I heard from them, I think that a back catalogue investigation is in order. Album contains ‘Winds and Sweeping Pines’, 20 minutes of beautiful electronic tones including perhaps some treated cornet sounds, and a piece which goes through about a dozen shifts and changes in completely unforced fashion, evoking joyous moods which contrast with more introspective and wistful emotions. Testament perhaps to their non-prescriptive and unprogrammed manner of making music. The drumming is spectacularly inventive throughout and never settles for a tedious motorik or disco beat. We only hear some recognisable cornet tones at the very end of this epic canvas, at which point the Billy Cobham fans will be leaping into the lively arena to grab a piece of this action. More suffused and understated is the track ‘It’s Alright’, a pulsating and inventive drone of textured distorto-electronica used as a platform for Mazurek’s brassy utterances. There’s also the title track, which is probably the cut most likely to appeal to listeners still seeking their thrills from 21st-century updates on Krautrock-inspired music. The rich drum sound here is something most technicians would give their right arm to achieve, smashing against the rippling waves of electronic genius-blather with zesty abandon. But it’s the tricky rhythmical base which once again is so creative, showing Chad Taylor doesn’t take coffee breaks in his mind when sitting behind his kit, and that he’s more in the lineage of a Sunny Murray than a Zappi Diermaier. Chicago Underground Duo were namechecked by the UK duo Warm Digits as one of their major influences, and you can take that to the savings & loan. Warm Digits have not slavishly copied the sounds of the Duo, but successfully emulate their passion, drive and joyful élan. Recommended. Released in March 2012, our copy received 29 February.

A very nice item is Flux (SPECTRUM SPOOLS SP010) by the American composer Robert Turman, an album he originally released on cassette in 1981. Turman’s earliest known work includes a 1979 single Mode Of Infection / Knife Ladder which he realised with Boyd Rice of NON, and because of this and Z.O. Voider he became associated with 1980s industrial music. Flux however is not abrasive grinding noise, comprising six long tracks of very gentle, melodic and understated minimal music made with piano, kalimba, tape loops, and drum machine. It’s beautiful music and the muted sound arising from this rescued cassette tape adds considerably to the charming, dream-like and restful aesthetic. A sort of less strident version of The Residents around the time of Commercial Album, mixed with Brian Eno’s ambient sensibilities, particularly Music For Airports. The press release points out the ingenious cross-rhythms in play, and praises Turman’s skills in realising this complex music while overcoming hurdles presented by the limitations of the equipment available to him, which is now regarded as somewhat primitive. Since 2009, Robert Turman has enjoyed a productive partnership with Aaron Dilloway who released albums for him on the Hanson label, and provided the scans of the original cassette for this reissue. One of the better releases from this label. Released as a double LP on St Valentine’s Day 2012.

The team of Lull, Beta Cloud and Andrew Liles all collaborated to produce Circadian Rhythm Disturbance Reconfigured (COLD SPRING RECORDS CSR139CD), a concept album which aims to suggest the effects of insomnia through sound; in fact the creators were mostly concerned with how the affliction of sleeplessness can affect the thought processes of the human brain. It might be viewed as a vaguely sinister experiment about the effects of sleep deprivation, but also an attempt at a psychological probing of those areas of the consciousness often neglected or overlooked. We received this in February and at first approach, neither ears nor brain nor sleep-sensors were particularly engaged by its empty-seeming surface, but today this album is just right; a clouded-up fogfest of supreme fugginess which leaves the listener adrift in a supremely ambiguous zone for over 20 minutes and hence meets all the requirements of unsettling music in the “dark ambient” genre. Lull is Mick Harris of Scorn, whose 1990s ambient texturising I always enjoyed when I was immersed in the field where every other record was mastered by James Plotkin, and the Isolationism compilation was my touchstone. Beta Cloud is Carl Pace, the American musician whose Lunar Monograph from a few years ago sounds intriguing. Together this pair made the original Circadian Rhythm Disturbance and released it as a three-incher in 2008; now here it is again in full, along with an Andrew Liles remix of same. Liles transforms the original completely, filling it out with horrifying explosions, scalding jet aircraft engines, sinister crackling fuzz and many other unpleasant incidents, completely undermining the menacing yet strangely soothing mood of the original near-blank murkoid statement. If we compare the two, I suppose Lull / Beta Cloud ask interesting questions about the nature and effects of insomnia, while it seems Liles is hell-bent on contributing to or even exacerbating the condition.

Got another bundle of psych-revival music from Dave Schmidt in late February 2012. Electric Moon‘s The Doomsday Machine (NASONI RECORDS 118) was not in fact released on his Sulatron-Records label, but Schmidt features as a main player of this band in his Sula Bassana guise. Throughout, muscular and dense psych-rock music in the Spacemen 3 vein. We’re warned that The Doomsday Machine is “enveloped by a gloomy atmosphere”, which may be true, but to me it’s the kind of energised and flailing gloom as typified by certain favourite apocalyptic songs of King Crimson, Andromeda, or Second Hand when they made ‘The World Will End Yesterday’ or Death May Be Your Santa Claus. The album’s title track occupies all of side one and relentlessly chugs away in a minor key with its thick, clotted sound. The drumming summons an army of skeletons, the throats of the vocalists are stuffed with palpable despair, and the wah-wah guitars in particular produce an inhuman screaming sound that is highly appealing. The rest of the album may not be as crushingly heavy as that supreme downer of an opener, but there are highlights like ‘Spaceman’, a strong contender for matching Richard Pinhas’s soaring sci-fi guitar longform excursions, and ‘Stardust Service’ which ought to bring tears to the eyes of fans of the early Pink Floyd. Ulli Mahn’s overwrought artworks are an integral part of the release, and Electric Moon have made it their personal project to reinterpret these elaborate paintings in music, thus also forging a link with the past (the painter is the father of band member Komet Lulu). All of Schmidt’s projects and releases may stand accused of having both feet firmly cemented into “retro” genres, but he and his bands do it with such conviction and pleasure that I for one cannot resist. Available as a CD and a double-LP with extras.