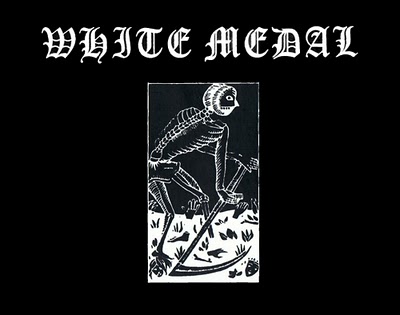 A Brief Survey of Yorkshire Black Metal (White Medal) and Beyond

White Medal is a raw black metal project masterminded by that one-man Yorkshire black metal universe George Proctor whose other bands have been featured in the previous two Yorkshire Black Metal posts. Everything mentioned in this post here appears on Youtube.com. A very early track, dating back to 2008, is “Chance (Rebirth)” and an excellent introduction to White Medal and the whole Yorkshire black metal scene (man?) it is too: after a gentle acoustic guitar opening, the song blasts wide open with a frenzied string blizzard attack, a constantly thrumming rhythm and deep rasping vocals.

A later track from WM’s 2012 demo release “Yorkshire Steel”, “Wod, Blod n’ Feathers” is a raw and rousing bass-heavy song, strong on riff and melody, and perhaps a harbinger of what we can expect from this band. The vocals are very strong and clear if frighteningly guttural. The fact that the lyrics might be in Yorkshire dialect does not detract at all as in practice it’s difficult to follow the lyrics, so distorted are the guitars and singing. A slow instrumental section about two thirds of the way through shows good understanding and control of musical, atmospheric and emotional elements in creating and sustaining tension. “Before Tha’ Arrived”, coming off a 2012 split EP with fellow UK band Caina, is a powerful pained song with vocals somewhere between anguished and deranged, and massive-sounding riffs throughout.

In-between these songs recorded in 2008 and 2012, WM released several demos which were later scooped up into a compilation CD “Yorkshire Heathen Black Metal” which among other things documents the band’s progress from guitar noise textures to actual melodic but still very raw black metal songs. All tracks have titles in Yorkshire dialect so I assume the lyrics are also in the same dialect. This might herald a trend among some UKBM bands to write songs in Old English and its variant dialects and in fact Proctor’s label Legion Blotan Records & Distribution actually boasts an act that might write songs in that language.

This is Satanhartalt from Northumberland whose track “Deathscufaegewinn” is a cold, mysterious and creepy mood piece of clunking machinery, ghostly whistling and a kind of dry-cave-air ambience. “Feondscipe” is a dreary trudging drumming ordeal through murkiness and hissing blackness while drunken piano sounds off in an apathetic and desultory manner. A deep vocal moans in the background. “Carcerntheostru” is an amazing piece of near-industrial metal scythe sweeping across the sonic firmament while high-pitched drones shrill at deafening levels and other strange machine effects come and go. Most of the track is rolling, whirring machinery rumbling on forever as if the lever got stuck and the damn thing can’t be turned off at the power point.

From Lancaster hails Lost Flood, also on Legion Blotan, whose “In the Snow” is more straightforward raw black metal, repetitive and minimalist in structure and hardly varying at all. Gruff, abrasive vocals come in fits and spurts. The drumming is primitive and consists of banging and crashing cymbals and pounding drums.

Scotland offers up Esk who so far has just one demo to her name. This is an experimental and abstract black metal / noise ambient project of one Lucy Johnson who sings for black metal act Rife. Esk has an unnamed track from her 2012 demo release up on Youtube and this is a booming piece with heavily distorted vocals and a blizzard atmosphere. Rife themselves hail from Newcastle and from the evidence of a song “Autocracy, have a raw crusty style of black metal with sinister inhuman vocals placed far back in the mix.

Last but not least, and this is drawing away from black metal into noise, there is Mutant Ape, Proctor’s very noisy noise project which is not bad at all, judging from tracks like  “Worlds Collide and “Skums”. It’s all very chaotic-sounding stuff featuring screechy background vocals and dense clouds of distortion blur outlines of the instruments, making it hard for listeners to pick them out. At this point, Proctor is probably making a lot of TSP readers feel puny and murderously jealous of his numerous black metal, industrial, noise and other music projects so I dare not investigate his other musical activities any further. Next thing you know, he’ll be playing organ and conducting the choir performing a new hymn (which he wrote, natch) at your local country church.

In a country with many problems of various dimensions – political, cultural and economic the most obvious of difficulties but also ethical, what with so many institutions once respected but becoming increasingly discredited as their histories come to light – there seems to be a search for new identity and new values that might stand the British in a more confident and worthy direction. The rise of a distinct raw black metal style drawing on several musical genres and associated network in northern England might represent one facet of this search.