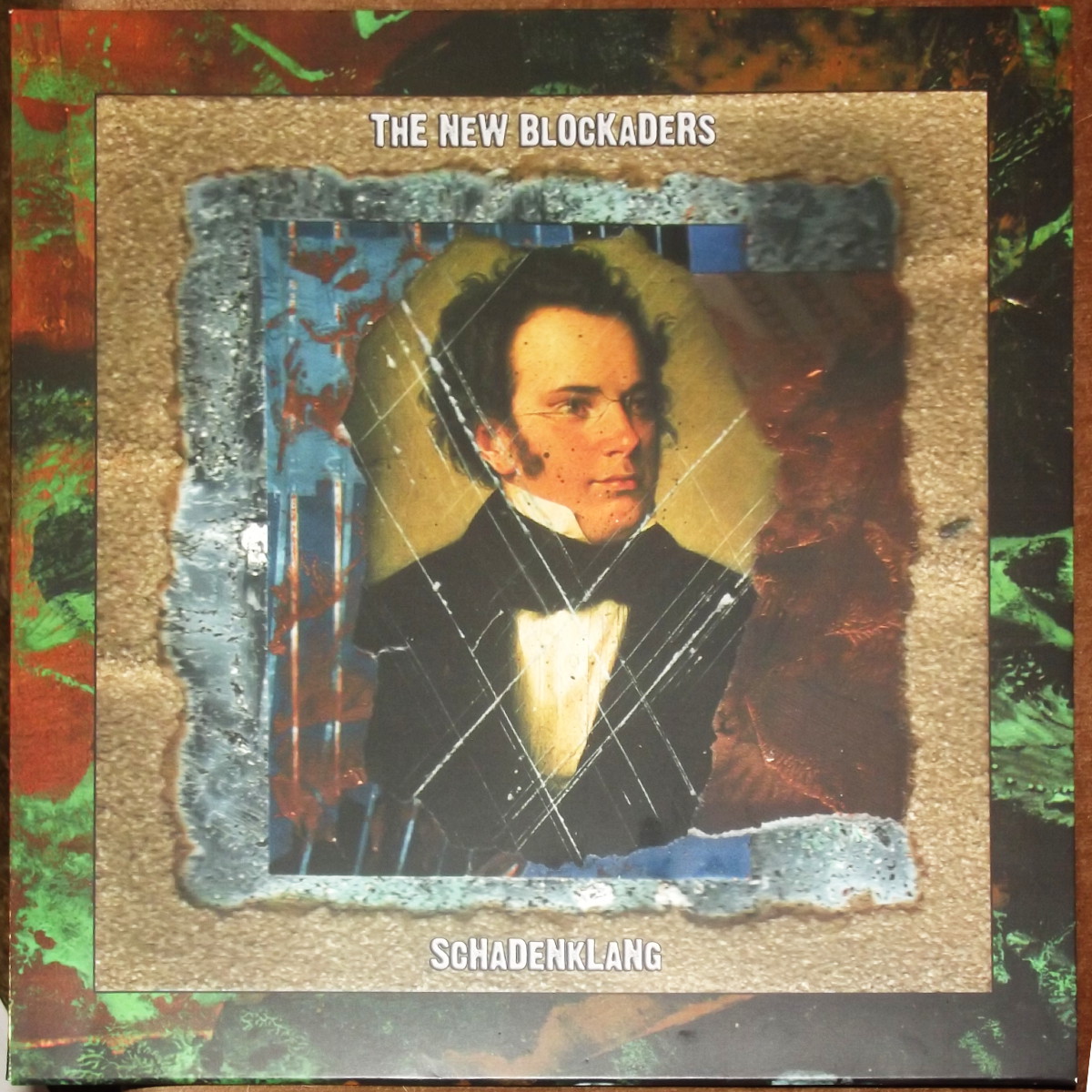 Who’d a thunk it…a new item from The New Blockaders that is actually a new recording. Gotta admit for a while it felt to me like the venerable Mr Rupenus was intent on reissuing his back catalogue in multiple formats and combinations, until we finally got the point. The reissue programme resulted in beautiful tangible products for sure, but for the listener it was also akin to receiving the same hammer blow to the forehead several times. After a few months of that kinda treatment, one wonders whether it’s time to change your hardware supplier. Of course that ain’t being fair to Richard R., as he has also been participating in split projects, ad-hoc teamups 1, and collaborative remix jobs a-plenty, all to the betterment and expansion of the fundamental New Blockaders aim of promoting nihilism and despair through noise. In April 2012 we received this nice vinyl copy of Schadenklang (HYPNAGOGIA GOG03), an item recorded in 2012 at the famed location of Morden Tower in Newcastle (famed because it was also the site of the earliest TNB events and recordings). Rupenus is part of an energetic triumvirate, a trio if you will, with Messrs Michael Gillham and Hal Hutchinson flailing at the master’s side with notched axe and steel mace. Gillham from Middlesborough is a young battle-scarred foot soldier of the noise wars, who has seen many campaigns performing in assorted punkified noise-rock and improvising contexts, while Hutchinson crawls forth from a more vicious strain of the genre as I would guess it, since virtually all of his past projects and aliases refer to violence, death and killing in some way 2. Given such credentials, these two would seem to be ideal contributors to the New Blockaders project. This particular vinyl two-parter is certainly characterised by a perfect rendition of what I would term Rupenus’s “Garden Shed from Hell” approach – pieces of twisted metal creating shrieking noises, rubble and glass being smashed up, and mechanical saws wreaking senseless havoc. While there is plenty of formlessness abounding, in many ways one of the Rupenus trademarks, there is also perhaps surprisingly some near-musical content almost emerging from the hideous wreckage and motorway pile-up that is taking place in slow motion. Such meagre beauty as there is has to struggle to survive though, much like a withered rose being buried under eighteen tons of solid concrete. This manifestation of TNB might not have quite the same ferocious push and forceful energy of earlier incarnations, but it does have the resigned and weary pallor of gloom in the “playing”, as though the execution of the noise were simply a rather tedious and unpleasant chore that had to be undertaken before dawn, like moving gigantic rocks from one side of the cell to the other. Issued with Rupenus artwork where once again he defiles and effaces a generalised image of European classical-enlightenment supposed perfection, juxtaposing it with paint-splatter process art in fecal colours, scuffed steel plates, sandpapery surfaces, and attacking any recognisable imagery with harsh stabbing marks. The back cover restates fiery statements, such as “We are the creators that destroy”, from the original 1982 manifesto.

The Basque agit-prop malcontent Mattin is another extreme noisester and like Rupenus refuses to give up, stating and restating his strident messages. Some of his anti-capitalist polemic has found its way onto the lyrics of Exquisite Corpse (OZONOKIDS OZKDS 017, AZUL DISCOGRAFICA AZD08, W.M.O./r 40), which is almost an album of sloganeering rock songs; one favourite snippet of wordage poses the conundrum “Attali advises Sarkozy / noise politics?” But the politics are only a small part of this unusual record. The main point of interest is the extremely spontaneous methodology used to create the record, which relied heavily on single-takes, sight-unseen readings of lyrics, a recording engineer who couldn’t wait to start the tape rolling, and a very laissez-faire mixing-editing technique. Mattin instigated these events, bringing in the talents of drummer Loy Fankbonner, bassist Margarida Garcia, and guitarist / pianist Kevin Failure. Keen to elicit an almost “absolute” degree of spontaneity, Mattin did not prescribe what instruments they should play nor how they should perform 3, and only supplied minimal information regarding the song content. They players were not allowed to hear each other, or the lyrics, in their headphones, and when all was finished (it was recorded in a single night) Mattin just threw the takes together on his computer with scant regard for “matching” tracks, a smooth production, or indeed creating a coherent musical statement of any sort. Through this process, he says, he expects the “exquisite corpse to vomit the new wine”. But he also regards improvisation as demanding a heavy commitment, and is clearly attracted to the idea that there is “no way back” once the statement is made. In that light, this record represents a somewhat more drastic enactment of that technique, where the stakes are very high and no quarter is given for self-congratulation, retakes, rehearsals, overdubs, or any of that namby-pamby stuff that other musicians do in the studio. I know that Frank Zappa occasionally made recordings where he would match up unrelated solos and other instrumental parts (he, or somebody, called it “xenochrony”), but Zappa was still pursuing some form of aesthetic beauty, which Mattin quite clearly is not. Rather, I suspect Mattin intends to lay bare the very process of making records in the same way he likes to expose mechanisms of thought and the inner workings of political practice in all areas of the great human machine. You could also regard this LP as adhering to the punk rock or post-punk ideals of one-take honesty and spontaneity, but that’s probably way off the mark too. I’d imagine that many punk bands did their songs in one take for economic reasons – they couldn’t afford to purchase any more studio time. At any rate, Mattin’s bold experiment catches fire in places on this record, which is chaotic, obnoxious, broken, disjunctive and verging on the unlistenable – but it is also fiery and spontaneous, a living thing of raw pulsating energies, and teeming with a life which has emphatically not been deadened or diluted in the studio process. I suppose we can all learn something from that. However, Mattin chose his collaborators wisely; I suspect there aren’t many musicians who’d be prepared to go along with an experiment as radical as this, and some might even regard it as a rather forced freedom, like being told you can do whatever you like at the point of a gun. The entire exercise is interleaved with fine art references; the “exquisite corpse” itself came from the Surrealists, and there’s a situationist slogan “Detourn Yourself!” scrawled on the cover, which is also littered with typewritten and scrawled texts from the lyrics, mixed up and tilted every which way, as if attempting to rekindle the power of a Futurist Words-in-Freedom page or the front cover of any given Dadaist journal. From 7th November 2011.