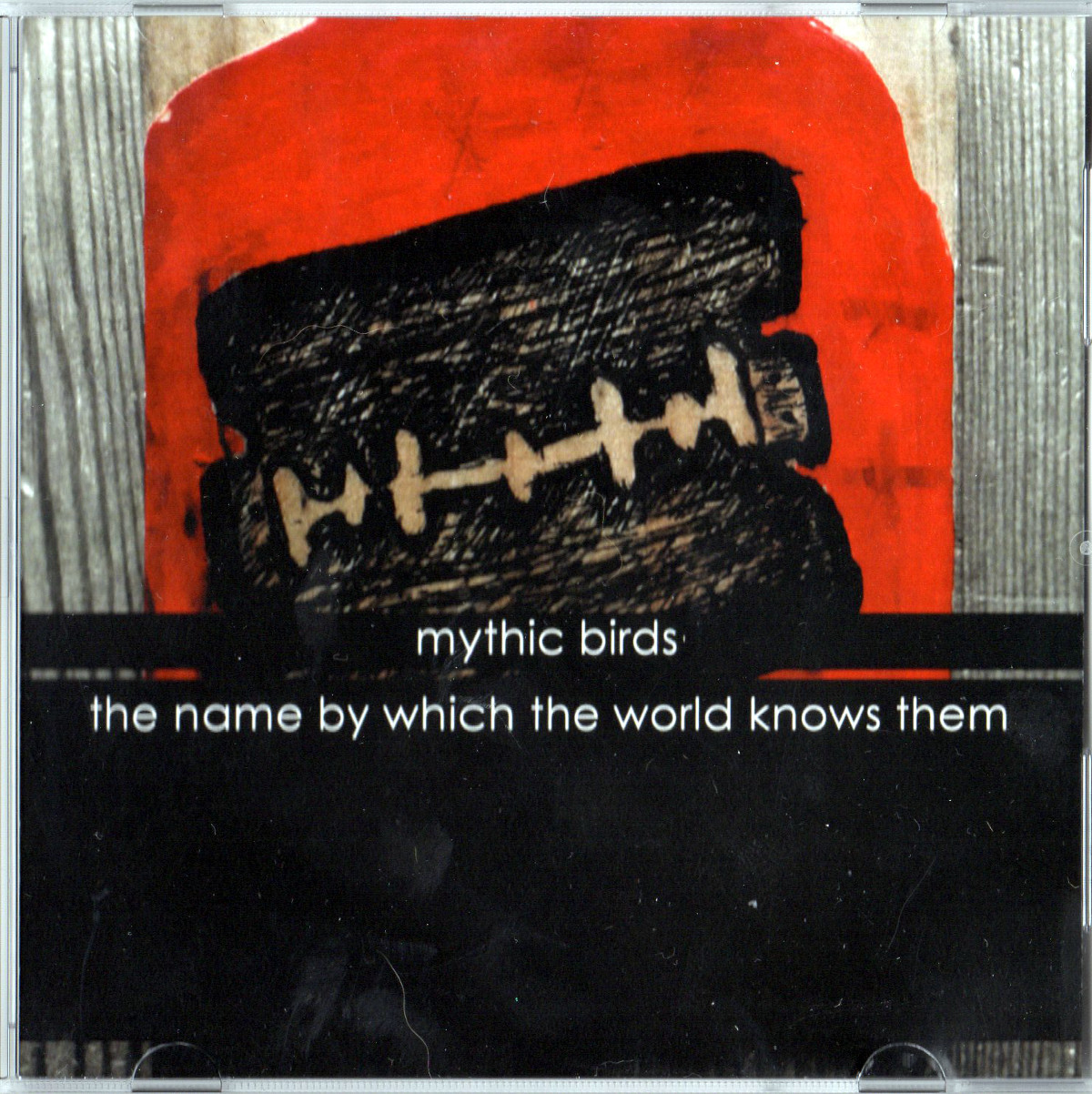 Not one but three bass clarinets can be heard on The Name By Which The World Knows Them (PEIRA 13), on a 2011 recording of improvised music by Mythic Birds. The woodwinds of Keefe Jackson, Jeff Kimmel and Jason Stein are accompanied by the modular synth utterings of Brian Labycz, and on this intimate recording the listener is guaranteed a lengthy stay in the warm bass tones of these concerted and massed clarinets, their ambiguous meditations twisting into complex melodic knots, while the tunes are punctuated by growling, breathing, creaking and stuttering effects. Bass tones galore fersure, but not everything is swimming like a midnight turtle in the lower registers, as the fourth track ‘Dissimulation’ will attest, where the swooping wails and high-pitched yawps exhibit the familiar warmth and expression of the human voice as only these instruments can. At all times the studious Labycz provides the correct degree of structured support from the cybernetic guts of his electronic instrument; none could accuse the man of creating excessive or attention-seeking analogue blasts. Notwithstanding a few subdued and misty passages of minimalism, this is largely a lively and noisy album characterised by a shared interest among the players in invention, abstraction, and juicy combinations of sound. Good to hear some old-fashioned craft and sweat in the improv genre. From 29 May 2012.

Jaap Blonk is the well-known Dutch improviser who does it all with his voice, one of the few abstract vocal hollering types we have in Europe (Phil Minton and Vanessa Mackness are two greats from the UK wing that spring to mind). On the short Voice Studies (MY DANCE THE SKULL VS07) cassette, he whispers and sighs like a sibilant ghost on ‘Approximate Air’, an effect which may remind Irish listeners of the banshee, but in its ineffectual wispiness isn’t much more effective than a breezy night spent on the Norfolk broads. My money is on ‘Apostatic Aria’ on the flip, which is packed with more full-bodied roaring, insane vocalese, mad growling and cartoon-character honkings dribbling from an inflamed cakehole. The raspy and abrasive qualities of this “chin music” verge on the alarming, as the performer brings great emotional charge into his very physical work. Clearly this particular piece also uses some overdubs, unless Blonk has a second mouth concealed in his belly, much like the mythical men whose heads do grow beneath their shoulders. It feels to me like most of the work is done by the throat; he’s practically transformed his own larynx into a fleshy distorting amplifier. In which case Blonk must be the biggest consumer of Fishermans Friend lozenges in the low-lying countries. One of three cassette tapes received from this SE London-based label, all limited editions of 100 copies.

More loopy maximalism by Music From The Film, an American fringe act whose unhinged recordings we have noted before in 2011 (How The West Was Once). On Vi Kommer Til A Fa Deg (ZEROMOON ZERO 134), the duo of Gary Young and Arthur Harrison are joined by Kevin Buckholdt, and once again a generous list of instrumentation indicates their “everything and the kitchen sink” approach to making music. Perhaps they liken themselves to the over-enthused supermarket shopper on the cover, whose trolley is laden to overflowing with consumer goods. There’s a staggering 22 tracks on the album, many of which are the vehicle for a vocal recit or narrative which does indeed add the hoped-for cinematic dimension – it’s possible to hear each track as a fragment from a movie, complete with dialogue and sound effects. A very unusual movie, I might add. Elsewhere, songs are attempted, results of which resemble a cabaret band imitating The Residents around the period of Cube-E. There are some very interesting sounds going down here, but when it comes to production the band just cannot leave well enough alone – almost every component has been doctored or distorted in some fashion, such that no sound reaches your ears without a concomitant wobble or queasy reverb effect. The sense of playful absurdity, not unlike that of Smegma or other lunatics from the LAFMS, is allowed free rein at all times, producing surreal and sometimes terrifying outcomes. I have a small reservation concerning the lack of structure, both within the songs and the album as whole; I feel that MFTF could certainly benefit from recruiting an editor, or a tough-minded producer, to tighten up the act. Assuming that is they could find someone mad enough to work with them. From 15 May 2012.

And speaking of loons, here’s everyone’s favourite Ergo Phizmiz. He is one of the UK’s certified geniuses of avant-pop – while I may not have that many of his actual releases, I get the strong impression he has a genuine facility for composing songs and making records that would make most musicians curl up into a tight ball of green-coloured envy. Especially when the results are so delicious. The added bonus in the cake mix is his one-of-a-kind personality, for which the adjectives “eccentric” or “idiosyncratic” remain palpably inadequate. Unusually, we were sent a promo CD copy of ‘It’s A Sin’ (CARE IN THE COMMUNITY NO NUMBER), his cover version of the Pet Shop Boys single, which was timed to be released as a single on the exact day 25 years after the original was put out. Phizmiz eschews the synth-pop basis of the original and renders the song as a form of highly dramatic song-speech, singing against a guitar and drum background that pounds home every syllable of the lyrics like knocking nine-inch copper nails into the hull of an antique sailing ship. Phizmiz reveals his own personal attachment to the song which features strongly in his personal history, and the accumulated weight of his emotional investment can be heard writ large across three pulsating minutes. His performance verges on the histrionic; it paints a disturbingly accurate if overwrought portrait of a soul sickened by his own sinful life, where even the pleasures his evils once brought are now a distant memory, but he cannot escape the cycle of sin. Phizmiz may not quite get to the “essence of the song” as he intends with each cover version he records, but he does express a potent and very plausible interpretation of the song which even its original composers may not be aware of. Astonishing. Still, if you think this audio rendition is a OTT, wait till you see the video. From 29 May 2012.