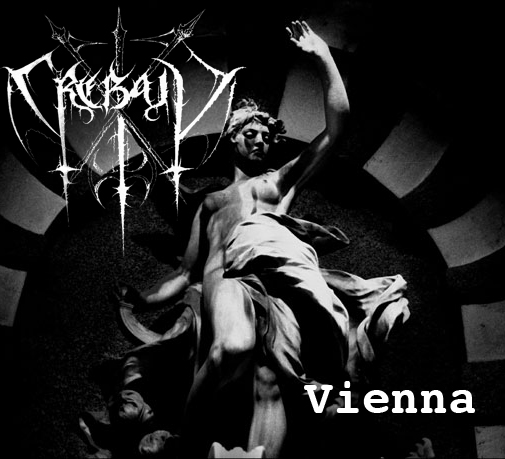 Curious that one-man West Coast USBM act Crebain has just one proper full-length recording to his name (“Night of Stormcrow”) besides a split with fellow Californian Leviathan. So what’s he doing with a cover version of the old 1980s Ultravox track “Vienna”, that definitive hymn to all that was overblown and pretentious about the New Romantic scene that swept Britain 30 years ago? Folks, if you were not born 30 years ago, thank your lucky stars that you didn’t have to hear the likes of Ultravox during when Midge Ure was the main singer of the band along with all the other silly pop acts like Duran Duran, A Flock of Seagulls, Human League and Spandau Ballet. Ohhh … you mean those guys are still about?! The original Ultravox version that I vaguely remember – I’m not prepared to go back to it on Youtube.com – is a schmaltzy and cheesy synth-pop ditty with a chamber music and piano accompaniment, a bombastic style and a theme of regret at the decay of society and a lost golden age.

Perhaps because the style of the original song is ripe for parody or deconstruction and the lyrics can also be interpreted in a way that’s not only different but completely opposite to Ure and company’s original intention that a black metal version is possible. Crebain places the over-the-top thunderous drum bombast at the beginning of the song and then strips it of its frills so that the beat and original melody, done on trilling black metal vibrato guitar, remain along with the lyrics and solemn air. The hissy and screeching vocals are set some distance back in the mix: they’re perhaps the most (intentionally?) disgusting aspect of the cover and a contrast with the faux operatic original. All the violin solo instrumental parts are more or less replicated on lead guitar which strips them of their preposterous grandeur. Overall the song’s style is a fusion of black metal and rock with a heavy beat and a poker-faced stodgy seriousness.

The cover art for the promotional single features a monumental statue of a figure in neoclassical style and suggests fascist brutality and arrogance. Possibly Crebain is hinting here that society as imagined by Ultravox 30 years really wasn’t so great and that for most people it was actually inhuman and barbaric. In that context, the chorus “It means nothing to me …” is a dismissal of the fake majesty and other false values of pre-1945 Western civilisation as imagined by Ultravox.

I’d prefer that Crebain could have picked on some other 1980s song to cover although I guess if I were in his position looking for an old pop “classic” to mash into a parody that criticises the original song and its intentions, I’d hardly go past pretentious pap like Ultravox’s “Vienna”. There’s not much to the original song to begin with and by sticking very closely to the original tune and lyrics, Crebain shows up the shallowness of the song and reveals the emptiness behind it; that means there’s really not a great deal to recommend the new version. Still, it’s far preferable to the original.

As the cover version is a self-released single, it may be hard to find so you can hear it at this link. This is Crebain’s first release in several years and may herald more work and perhaps a full-length album in the near future.