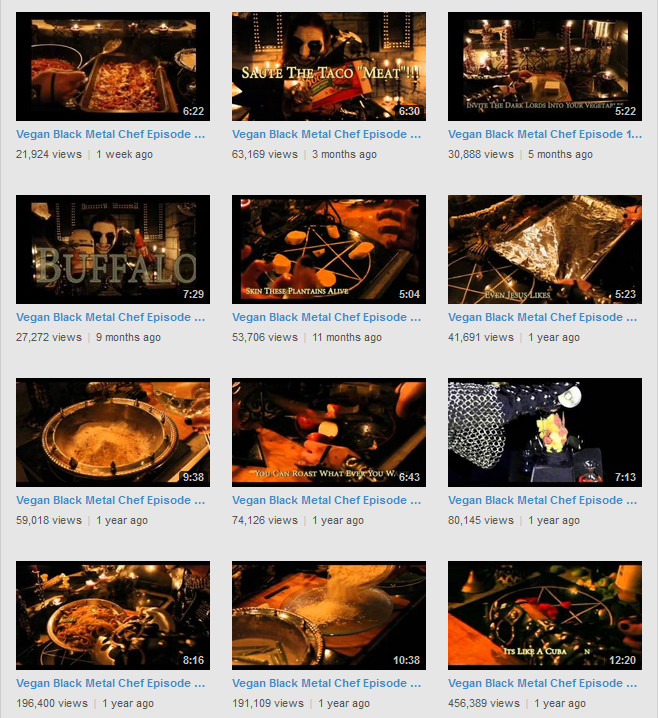 Satan Almighty, with even Simon Cowell muscling in on the reality TV cooking phenomenon, we here at The Sound Projector are in danger of being left behind biting the dust! Who better than to save our souls and credibility than Vegan Black Metal Chef. In this, his first episode, Vegan Black Metal Chef (Brian Manowitz) takes us through a step-by-step explanation of how to cook that very Scandinavian dish (or more specifically, that very Swedish back-packer / tourist / late-home-from-work-what’s-in-the-fridge staple) known as pad thai in its simple tofu and tomato version.

Accompanied by straightforward traditional black metal music and lyrics in sub-title form (cos as you know, listening to and deciphering black metal lyrics can be difficult), VBMC explains what ingredients you need, how to prepare them – and the preparation can be detailed and laborious – and how to mix them together and cook the lot. He even goes into considerable detail into how to make the peanut sauce. By Lucifer, do we need THAT MUCH sugar? I guess when you add all that tamarind, tamarind paste, garlic powder, fresh garlic, chilli powder, coriander and salt plus the rice noodles, you’ll have a distinctively tangy peanut sauce; as VBMC explains in song, “… the ones in the stores all suck / if you’ve ever tried them … they’re all very mediocre …”. The tofu is drained of water, cut into triangles and deep-fried, later to be added to the mix.

The result actually doesn’t look too appetising though VBMC adds lime pieces for extra tang and liberally sprinkles crushed peanut bits all over. The whole cooking lesson is very entertaining and informative: VBMC uses close-ups to illustrate how to cut the tofu and slice other ingredients, crush the peanuts and stir the peanut sauce ingredients. The silliest part is when the mixture is cooking and VBMC summons the Dark Ones to add extra heat to the simmering food by head-banging in front of the stove.

The cooking lesson is much better than what often appears on TV programs: TV usually focuses more on the celebrity presenting the food (and sometimes on the celebrity’s cleavage) and details like how to hold the knife when slicing are easily missed. Not that VBMC makes it easy as he uses his own unique carving blades to do the slicing! The lesson is sometimes repetitive but the guy’s targeting a young audience (college students). By not focusing on quantities of ingredients or timing, and going through sometimes laborious and repetitive actions without resorting to the use of blending machines, VBMC makes the whole routine look fun, straightforward and easy to follow. He does show that some of the work can be hard.

The music is standard melodic black metal with death metal influences in the drumming and rhythms. There’s a different song for each section of the video though they are all secondary to the instructions so they sound much the same and there are no guitar or drum solos. The music speeds up and becomes more aggressive during the cooking part.

The only downside is that VBMC looks like Gene Simmons instead of a trOO kvlt black metal type with long greasy hair, too many studs and rubber spike things on those arm-bands, and black togs. French black metal types may substitute leather to look a bit more so-Frenchy-so-chic. The kitchen isn’t overdone in Satanic paraphernalia though the stove is suitably black and surprisingly clean. VBMC would put some of my relatives to shame with his clean and tidy kitchen.