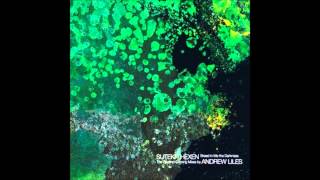 Prominent players in the black metal / noise/ drone scene, the Californian band Sutekh Hexen (Scott Miller and Kevin Gan Yuen) teams up with sound artist Andrew Liles to produce this album of two Sutekh Hexen tracks plus their respective remixes. Having someone like Liles, a long-time Nurse With Wound collaborator, chew up Sutekh Hexen tracks might seem a bit superfluous as Sutekh Hexen would appear to have the intense blown-out blackened noise soundscape genre all sewn up with nothing left for anyone to work with into something even more forbidding and extreme but Liles has managed to control and sculpt the tracks to his own out-there specifications. The threesome even cram the originals and the remixes into the modest physical format of a 45-minute cassette tape.

Unusually the first side opens with the remix of “We Once Walked Upon These Coals” with the original following after. Stern piano melodies, brimming with sinister portent, take us into a black passage of ambient horror-expectancy: a deeper melody, steely and rumbling, generally contrasts with a shrill, icy-toned trilling tune. Ghostly wobble and susurrating sound fill the background void. The track slides into a fluttering machine ambience as if a giant mosquito drone the size of a passenger jet were hovering just above. Meanwhile a crowd of voices starts gabbling faraway. Machine-like rhythm guitar riffs start churning out and are joined by an evil lead guitar solo trilling up and down the music scale in joyful, deranged mirth. For a brief time, Liles turns Sutekh Hexen into a Satanic heavy metal band. Fear not, SH aren’t going cartoony-evil, the guitar solo halts and that hellish monster-insect flutter-churn resumes its baleful rhythm.

It’s hard to tell where the remix ends and the original track begins due to the cassette format used but I take the break between tracks as that brief moment of quiet before a series of explosions begins that expands into pealing church bells and a choir of phantom voices that bleed into the metallic bell tones and the swirling mess in the background. Various found sounds – screaming women, twittering birds, the metal mosquito drone, a malevolent chanting priest conducting a Satanic ritual among others – fill the song.

Side B sees SH burst out with manic cloudbursts of blackened guitar noise buzz, ripping through the black atmosphere with a sharp hissy edge reminiscent of a high-pressure water hose spewing its product; this might be a highly distorted vocal. The song quickly exhausts itself and drifts into a ghostly pall that roams widely over a bleak and dark landscape. Liles’ take on “Selling Light to Lesser Gods” reconstructs it in reverse: the remix rises quickly out of the void into which the original disappeared with church organ droning as its companion. A choir of demon choristers howl wordless hymns of damnation from their perches and stalls in the blackest parts of Hell. Piercing vocal hiss sounds stab through the track, pronouncing vile curses upon listeners foolish enough to have followed the recording this far. A maddened organ accompaniment is interrupted by shattering glass and the track passes into another realm of blackened ambient hell where the phantom choristers find their voice again. A layer of fuzzy black metal guitar noise loops repeatedly into a sudden outburst of digital sandstorm chaos, beneath which grit coalesces into a demon voice trying to say something. The whole thing stutters into a rapid train rhythm cut short by shattering glass.

The two tracks and their remixes are good though they might have been better on a CD format: the kind of blackened experimental soundscape noise that SH traffics in needs contrasts of sharp sound, blurry noise and other distortions in sound texture and production to bring out the best in all sound textures used. There’s a point in the music where the entire sound universe passes to a deeper, more sinister plane of existence and a CD format would have brought that transformation into clearer focus. As it is, the album isn’t bad but I think the beast that the trio has created is cramped in a sound cage and must have a different format to spread its wings and fly in full monstrous majesty. The ambient and sound-sculpture aspects of SH almost disappear in the cassette format and the music is in danger of sounding one-dimensional much of the time.