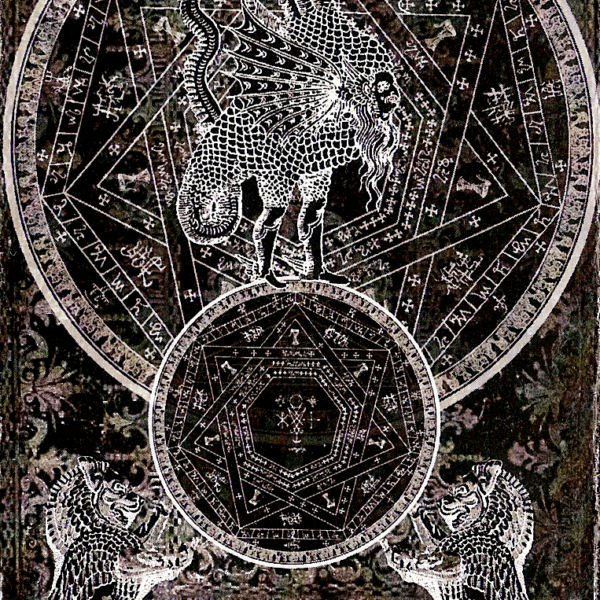 While looking at something else on Youtube.com, I glanced to the right-hand side of the screen (where the list of other viewing options is located) and saw that a demo by a band rejoicing in the wonderful name of Aethyrvorous (it just looks so good, I don’t even stoop to think what aethyrs are that the musicians are so enthusiastic about eating them) had been uploaded in three parts so as you do, I decided to check the band out. (Aethyrs are a kind of spirit referred to in some gnostic forms and systems of knowledge.) This self-titled three-song demo turns out to be an unholy behemoth of heavy blackened death metal with lightning-fast lead guitar licks that  illuminate the silhouette of the monstrous mammoth that is the band’s style. Sad to see then, that this demo is the only recorded proof of the band’s existence as the guys split some time after the recording was made and aren’t planning a reunion for old times’ sake. A full-length album, even if just a ragbag compilation of singles, rehearsals, out-takes and live performances, would have been icing on a huge cake.

Ain’t nothing like a bit of throat singing, guttural chanting and groaning, and some droning Tibetan-style monastic music to set off proceedings. After some deep meditative music on the emptiness and unreality of life and the endless cycle of birth, death and rebirth, the band launches straight into a tortuous journey of thundering, stuttering drum rhythms inter-twined with scrabbly guitar and tormented roaring vocals. In some ways this music is reminiscent of Deathspell Omega in atmosphere and its tortured quality. Voices gabble and rage at each other while riffs launch desperately into the air but can barely complete their trajectories before being pulled back to earth. Solo lead guitar howls with a thin tone as if losing the fight for life. Unfortunately this track ends all too quickly. Track II picks up the pace and fury with a short introduction of blaring horns and cow-bells that lead into a frantic song of overworked choppy guitar licks, hurried drumming and what sounds like musings of deep-voiced demons unconcerned with keeping up with the sometimes cacophonous music.

Track III is a mighty death swamp beast that changes beat and rhythm at lightning speed throughout while lead guitar spasmodically sputters and squeals in the midst of a grimy seaweed-crowned lagoon monster aesthetic. Rhythm guitars trail thick sludgy magma. Towards the end the lead guitar forgets itself and dives into a deranged whoop of trembling flutter and high-flying howl. The rhythm changes yet again and falls into something thick, slurpy and serpentine as drum rolls and crashing cymbals duel with each other and guitars growl continuously. As usual, the vocals have little to do with the music and for all I know might be declaiming something important in the thousand-year history of Satanic philosophy; that could explain why our ears must be constantly slugged with the black bile the demon vocalist vomits and spews.

By all that’s unholy, at the risk of damaging my sanity from exposure to this particular example of profane black art, I wish this demo had been TEN TIMES as long – oh all right, let’s say at least THREE TIMES as long – as it is: the 23-minute running time simply doesn’t do justice to the variety of music featured in these tracks, especially in Track III. The music is positively reptilian and as cold-bloodedly malevolent as it can achieve without freezing over into something resembling the ninth and lowest part of Hell where Satan is encased in ice. The sampled recordings of Tibetan religious music set the scene for all three tracks and put the guys into the appropriate frame of mind to deliver genuinely sinister and creepy music that resembles a hulking, guttural, grime-encrusted giant from the miasmic deeps.

The most impressive aspect of Aethyrvorous’s short demo is its intensity and deep immersion in the esoteric and this is reflected in the artwork of the cassette tape cover: overly detailed filigree work portraying mysterious mythical monsters bearing aloft a structure of strange yet familiar glyphs and sigils combined with a riot of decorative symbols and hieroglyphic designs. The only other band whose absorption into the occult seems as intense and complex as Aethyrvorous’s total submersion is fellow Australian act Elysian Blaze. (Now isn’t that intriguing to know, that two Australian acts in different cities appear to have reached such a deep level of commitment to the black arts and no-one else has?)

Most readers will be able to find the demo by visiting Youtube.com and typing the band’s name into the search field. Quite a few people have uploaded all three tracks there and have also posted pictures of the artwork. Neither the band nor its individual members – well heck, I’m not even sure if there had been just the one person or a few people in the band – appears to have a Facebook / Twitter / MySpace or bandcamp page.